Roger Roger first went to the Winnipeg Folk Fest in the womb. This weekend they played main stage 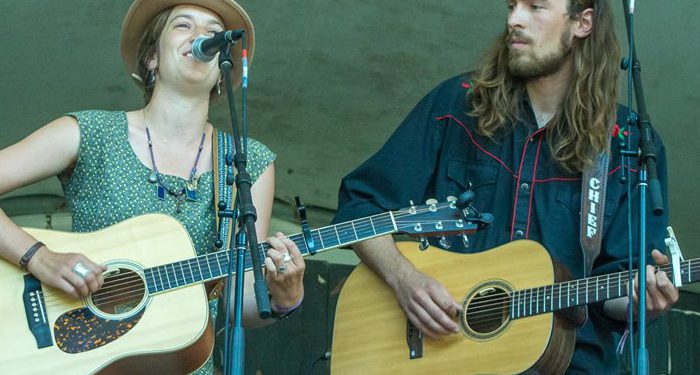 Lloyd Peterson bounded backstage with a smile that threatened to outshine the sun.  No words, just a look of pure joy and two thumbs up.  On this night, opening night of the 45th Winnipeg Folk Festival, he wasn’t the in-demand producer/engineer known for his work with The Wailin’ Jennys and the Weakerthans, nor was he the local music icon behind The Cheer, a very popular local rock band in the 80s.  He was just dad, and loving it.

Immersed in music, the twins started out working separately – Lucas joined bands, and Madeleine quietly wrote songs at home – before joining forces in 2014. That summer Roger Roger appeared at Folk Fest as part of the Young Performers Program, and the rest is history.

Despite having parents in the industry, Madeleine said the Young Performers Program was very important to them.  The program matches small groups of musicians aged 15-24 with a mentor, one of the year’s headliners, and they work together on simply honing their craft in a number of ways to improve their chances of becoming a professional artist.

“It’s great that young performers get to work this close with actual professional artists,” Madeleine said.

“Music was already in our lives, but it was important to find out what the lifestyle is like and how they developed their careers, and hearing from an actual professional that it’s possible for you to take a stab at it and make it work.”

Umm, your dad didn’t mention that? I think to myself.

“It’s validating coming from somebody who doesn’t know you,” Madeleine added.

The duo has toured Canada extensively, as well as Europe. Their debut album, Fairweather, released in 2016, hit No.1 on the Canadian folk, roots and blues charts.

But tonight would top all of that.

“It was surreal leading up to it,” Lucas said. “Then when it happened, it was perfectly real.”

“It felt so good to be there,” he continued. “The history we have here and then to see all of our friends down there (in the front rows), it was really sweet.”

Under the bright sun on a perfectly beautiful prairie evening, the duo’s brand of light and upbeat folk-pop was just what the audience wanted.  The crowd was fully in tune to their wavelength, their collective sighs echoed, “yeah, this is just what I need right now.”  A mix of album tracks and new songs were well-received by the early crowd, many of whom weren’t yet familiar with their music.

Though it’s a great honour to open the festival, it is a tough slot, as folks are still arriving, still meeting up with friends and getting settled.  It says a lot that they kept the audience’s attention through the entire set, never mind earning warm applause after every song.

“A couple of times I was glad I had sunglasses on,” explained Lucas, still basking in the afterglow, “because I was crying.  This was so beautiful.”

“I didn’t have sunglasses on,” Madeleine said, laughing. “I just wanted to see everybody, but there was this bright sunlight stabbing my eyeballs.  It was totally worth it!”

The Folk Fest has always been an integral part of their lives, as the family has camped, worked, volunteered and MC-ed at the festival since before the kids were born.

“Our first year coming here we were in the womb,” Lucas said. “Our mom was pregnant with us, and we’ve pretty much been here every year since.”

One of the trademarks of this festival is its drive to constantly improve on all levels, from eliminating disposable plates and cutlery to planting trees; making all amenities, including paths, accessible; honouring great indigenous voices while we still have them;  and, this year, achieving gender parity.  Who knew?  There were no press releases about it, and no one would have known had Madeleine not acknowledged it from the main stage.

“I think this is marvellous,” she said. “They didn’t make a statement about it. They quietly just did it, and that’s important to us all.”

The crowd response was unanimous: yes it is.

“What they are actually saying is that this is normal. … It’s about having a real reflection of the audience,” she explained, “and it means everything to me.  It feels amazing to be part of a festival that quietly just does what is right and is fair and equal.”

“As important as it is to us,” added Lucas, “it’s far more important to people who aren’t aware, the ones who are so young [that] they’re not thinking about it yet.  But it’s being normalized through them.”

“And young people, middle-aged people, elderly people, everyone needs to see women playing the drums, playing the electric guitar, playing the bass, writing songs,” Madeleine explained. “All of it has to be seen so that everyone knows it’s an option.

“Guys need to see it too,” added Lucas.

“But we’ve got it covered,” he added. “We’re twins and we’ve been to a lot of folk fests.”

Roger Roger will be performing at one more festival this summer.  Aug. 10-12, they will be in Ear Falls, Ont., for the Trout Forest Music Festival.

It’s safe to say the duo has graduated not only to the big stage, but from young performers with role models to professional artists who are role models.