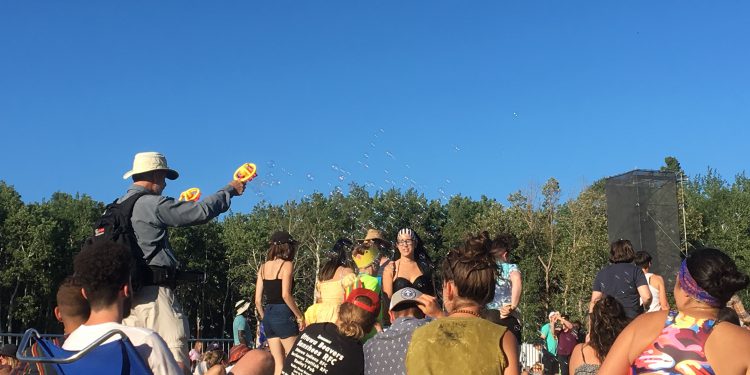 An audience member with a bubble machine!

1:30 p.m.: The first show I checked out on my lazy Sunday was Julien Baker at the Green Ash stage. Baker, an American indie folk artist from Memphis, has a voice like none other.  Her show was mostly a one-woman performance, with occasional assistance from a friend of hers on violin. Given the intimate setting for the concert at Green Ash, Baker had lots of time to explain the meanings behind her songs, as well as have some general chats with the audience. She joked that it was a “cosmic joke” that she is a performer, as she has no desire to speak to crowds from a microphone. During the show, she premiered a new song called “Mercy,” to which the crowd responded ecstatically. Baker’s voice is one of the most beautiful, haunting voices I have ever heard, and I felt very lucky I was able to see her set.

2:30 p.m.: Since it was the last day, I went to check out the stores while they were still there! There were quite a few interesting finds, and I bought several unique pieces of jewellery. The first I purchased was at Salvaged Earth Designs, where all pieces of jewellery and kitchen utensils were made of salvaged materials. I purchased a cute spoon necklace that I absolutely adore, which is made out of lavender wood! I also checked out SkateBetty, where I bought a ring that was made out of the inside of a skateboard! Such a cool idea. 3:00 p.m.: Grabbed a quick lunch and headed over to the Snowberry Field stage to check out the workshop entitled About Last Night, featuring Lanikai (indie pop artist from Manitoba), Five Alarm Funk (a Vancouver-based funk group), and Too Many Zooz (jazz group from New York). This performance was great background music for my lunch break, and people were really enjoying it, even though it was still quite sunny (read: hot) at the stage.

4:15 p.m.: We stayed put at Snowberry Field to check out the next workshop, which had a title in written in syllabics that this web site can’t reproduce, featuring A Tribe Called Red (a group that mixes traditional First Nations music with dance beats), Las Cafeteras (Mexican fusion folk from California), and nêhiyawak (indie folk group from Alberta). This performance was calmer than the Saturday night performances of A Tribe Called Red and Las Cafeteras, which fit the restful mood of Sunday perfectly.

6:00 p.m.: Following the last workshop for the day, we packed up our blanket and headed for the main stage to get a spot for St. Paul & The Broken Bones, a soul group from Alabama. Lead singer Paul Janeway has one hell of a stage presence, that’s for sure. From moving around for every song to rolling around on the stage, strongly belting out lyrics near the end of the set, it was an expressive performance. Those soulful vibes really got the crowd going. Over on that stage is the workshop featuring A Tribe Called Red.

7:00 p.m.: The next performance by Huun-Huur-Tu, a throat singing group from the Tuva region of Russia, was unexpected, but I absolutely loved it. The sounds that these men could create with just their voices were amazing, and I was stunned when I heard some of the high notes they hit with just their throat singing. If you have the chance, look them up and check out what I mean. I highly recommend it. It was an experience I won’t forget anytime soon, even though it was just a short tweener set.

7:20 p.m: English singer-songwriter Passenger took to the stage, and although he was all alone up there, he did a wonderful job of keeping the crowd entertained.  He managed to keep the show very intimate, despite the vastness of the main stage setting, and he made a point of explaining the meanings behind songs, such as his song “David,” which is about a homeless man he met at a hostel. And of course, when Passenger played his hit song, “Let Her Go,” the entire crowd stood up and sang along with him, which he encouraged.

8:40 p.m.: The last big act of the evening, Sheryl Crow, took the stage and performed essentially most of her big radio hits, with a few new songs sprinkled about. The crowd for this performance was a bit older than had been the norm for most of the other final acts of the main stage, but nonetheless, it was a very excited crowd. An audience member with a bubble machine!

10:00 p.m.: With Sheryl’s show over, the closing ceremonies for the festival began. Many artists came to the main stage and sang together; people held hands and sang “Amazing Grace.”  It was a wonderful way for the festival to end.

10:30 p.m.: Then I got to experience the best music of the weekend: a chorus of horns and car alarms for 40 minutes in the parking lot. But jokes aside, once I was finally on the road, it hit me that Folk Fest was over, and that I’d have to wait ‘til next year to do it all over again. Which I gladly will.

Stand Out Performance: Julien Baker was an absolute delight and has one of the best live performances I’ve ever seen. The power in her voice is amazing, and for someone who is only 22 (a year older than me!), she is doing an amazing job, and I cannot wait to see how her music develops in the future. I cannot recommend her enough.

Favourite Moment: Just being able to spend a lazy Sunday at Folk Fest taking in the last bits of sun that the day provided to everyone. And then realizing I can go back next year!

Thank you so much to everyone who has read my coverage over the last few days.  I’m so glad I was able to experience the Winnipeg Folk Fest and share my great time with all of you! Frozen snacks are a must in hot hot weather!