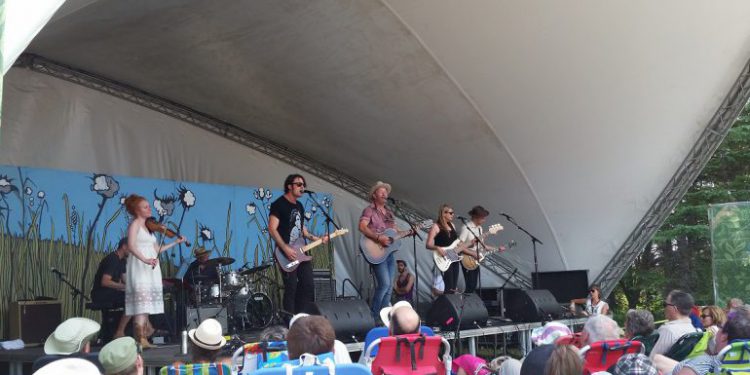 “I never get tired of playing that song,” Barney Bentall beams. “I love it!”

Enough, apparently, to pump out a rollicking six-minute version that brought the crowd to its feet Saturday afternoon at the Winnipeg Folk Festival. That song, the feel-good blue collar anthem from the late 80s “Something To Live For,” is Bentall’s best-known tune, recorded with The Legendary Hearts, though it’s technically not his biggest hit as “Crime Against Love,” “Livin’ In The 90s,” “I’m  Shattered,” and “Gin Palace” all charted higher in the 90s.

As eager as they were for that song, the crowd was equally enthusiastic and receptive to newer songs from Barney’s solo albums and side projects.  Since the band called it quits in 1997, he has recorded 10 albums, four solo outings, and two each with The High Bar Gang and Bentall, Taylor, Ulrich (with musician Tom Taylor and Juno-winner Shari Ulrich)

While he still plays the occasional show with his hit-making band,  the 62-year-old now records as a solo artist and was accompanied by Geoff Hicks on drums, bassist Kirby Barber, guitarist Scott Smith and fiddler Mira Mulholland.

“This is just the best band,” Barney Bentall said about the crack four-piece, the members of which are all young enough to be his children.

In fact, there was one this weekend who actually was, as his son, Dustin, joined the group on guitar and vocals. Not just a sideman, Dustin had his share of solos and took the mic on lead vocals for a number of tracks, including a stirring version of “It Makes No Difference” that hit the audience right in the feels, as the kids say.

“This is the most fun I’ve had,” said Dustin, with an ear-to-ear smile, when asked about playing with his pop.

On a fashion note, both Bentalls were sporting boots made by Dustin, who, in addition to being an up-and-coming roots artist in his own right, is also a designer of leather fashions.

The ever-gracious and cordial Bentall mainly let the music do the talking, but he did have a few kind words for the host city.

“Ever since the first time across Canada, I always got excited to reach Winnipeg,” he said, “as it has always been hallowed music grounds.”