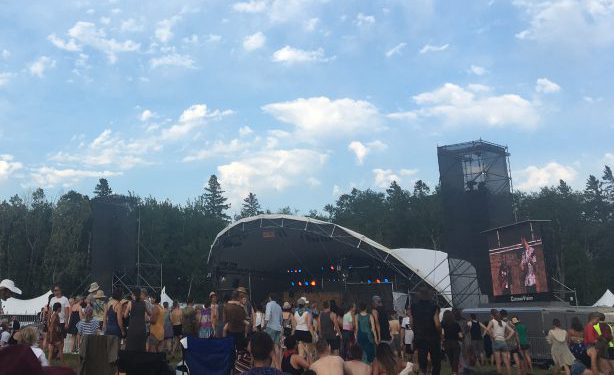 12:30 p.m.: Arrived at Folk Fest more prepared than ever for the weather. With temperatures going to be nearing 35 celsius, I put loads of ice in my water and came prepared with a blanket to sit on. Hot days call for sitting in the shade! I also went to grab another carton of those mandarin oranges before heading to the first show of the day.

1:30 p.m.: Very happily in the shade, we checked out indie rock band Real Estate again briefly at Bur Oak. It was a very lethargic environment as everyone was trying to get cooler as the humidity built up. However, everyone was still enjoying the show despite this. One of my friends with a very keen eye spotted Courtney Barnett playing on stage with the band! Hydration is necessary when staring down a 35-degree day. Hence, more oranges!

2:30 p.m.: Went to grab a quick snack of fries before heading to the Little Stage in the Forest. Waited in line for Skinner’s, but when I was handed my fries through the window I accidentally dropped them! Thankfully they made me a new batch, but it was sure embarrassing!

3:00 p.m.: Next we checked out indie folk duo Fortunate Ones’ concert at the Little Stage in the Forest. I was very excited to see that they were performing at this venue, since it is now my favourite, but also because of the much needed shade it affords. The crowd really enjoyed the backstories of their songs, and it was an enjoyable, soothing environment to be in during this time of the day. For their final song they played “Ordinary Day” by Great Big Sea (who are also from Newfoundland!) and the whole crowd was clapping and singing along. What a great way to end a set!

4:30 p.m.: We then journeyed over to the Green Ash stage to check out the workshop titled Old Songs, New Songs featuring Bahamas (folk artist from Barrie ON), Mappe Of (folk singer-songwriter from Toronto), Gabrielle Shonk (indie folk singer-songwriter from Quebec), Whitney (indie folk band from Chicago), and Matt Holubowski (singer-songwriter from Quebec). Just as the title of the workshop suggested, each artist took turns playing songs of theirs both old and new. The artists kept joking that the songs they were playing were depressing, but it really didn’t bring down the mood in the crowd all that much!

6:00 p.m.: Mandolin Orange, a folk duo from North Carolina, were the first up at the main stage Saturday evening. People were starting to claim their spots for the night of entertainment, and their sound was guiding folkies towards the stage. That is Zoë on the left at the Winnipeg Folk Fest Saturday!

6:45 p.m.: Wallis Bird finally got the kind of audience she deserved during her tweener set at the main stage. She played several of the same songs from her set the day prior, but it did not impede on my enjoyment of her performance one bit. She did great on the main stage!

7:10 p.m.: Las Cafeteras, a fusion folk group out of Los Angeles, were the next to take the stage by storm. People were dancing and moving to their Mexican beats, and they did not disappoint. Not knowing what they would sound like going into the performance, I was very pleased. Their between-song banter included commentary on political issues, notably the issue of gun violence. At the end of their show they asked the audience for a family photo, so if you squint really hard, you might be able to see me!

8:10 p.m.: Boniface, the indie artist from Winnipeg, got his quick show in on the main stage as a tweener just before Whitney. Just like yesterday, even in his short time on stage, you could tell the passion he holds for his work. Plus it got people dancing once again as more people moved to the front.

8:30 p.m.: Whitney took to the stage and many of the younger folkies crowded to the front to go and dance. I wasn’t quite in the dancing mood yet as I was still suffering from lethargy due to the day’s sun, but nonetheless I still enjoyed their performance. When they played their song “No Woman” near the end of their set, I couldn’t help but sing along.

9:45 p.m.: Bahamas took to the main stage and began to mesmerize the audience with his mellow folk tunes. His voice very smoothly captured the ears of the folkies in attendance, and his relaxing sound was much needed after a day so hot and humid. The sun had fully set by the time Bahamas took to the stage.

10:50 p.m.: Tweener Matt Holubowski, whom we saw earlier at the workshop Old Songs, New Songs, took to the stage and performed some of the final folk songs of the night…

11:00 p.m.: …before something entirely different: A Tribe Called Red, a group from Ottawa I had heard much praise for but had never listened to. They are an eclectic group, combining traditional-style First Nations music with dance and club beats. When they started their set, many young folkies began to rise from their seats to run up front and dance. At this point, I had to dance too, because of the high energy all around me! They had a great stage show, and the crowd absolutely loved them, old and young folkies alike.

12:20 a.m.: As I walked out of the festival grounds to my car, you could hear the cheers and shouts of people leaving the festival to venture back to the campgrounds. The energy in the air was amazing, but sadly, I was far too tired to partake in the cheers for much longer than a few seconds.

Stand-Out Performance: I really enjoyed the workshop performance at Green Ash because of the variance of songs played by the different artists.

Favourite Moment: Once the sun had finally set, and I was comfy on my blanket listening to the main stage artists perform. Having that hot hot sun out of sight made the rest of the evening so much more enjoyable.