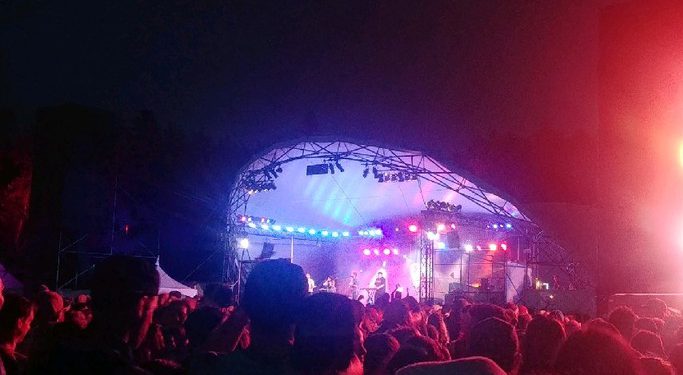 11:30 a.m.: Arrived at Folk Fest again with easier than expected parking. Very impressed with how they keep the cars moving considering there are so many people here! Wandering in, we quickly discovered a fruit cart courtesy of Jardins St-Léon Gardens and bought a small carton filled with mandarin oranges. Not many festivals can offer you a snack like that! Where else but the Winnipeg Folk Fest can you buy something as healthy as oranges to snack on?

12:00 a.m.: Oranges in hand, we went to go check out Wallis Bird of Ireland at the Little Stage in the Forest. Bird was a one woman show, but her guitar skills were more than impressive to say the least. With just her acoustic in hand, she was able to produce a variety of different sounds that were captivating us as we ventured the path to the stage. Later she broke a string mid-song but kept on playing! While they were addressing the guitar issue, Wallis didn’t miss a beat and started singing a cappella and picked right back up once she had her guitar back. Unfortunately, my fellow folkies seemed to be looking for more of a mellow atmosphere, so when Bird attempted to reach out and get audience participation, it really wasn’t there. I feel that her show would have been better suited for a later time or a more active crowd!

1:30 p.m.: For lunch we stopped at both King + Bannatyne and Kyu Grill. At King + Bannatyne, we grabbed some brisket sandwiches. They were delicious, and a great snack in between shows. The iced tea there was a great thirst quencher as well! Some of us also stopped at Kyu Grill for a Hiroshima, which is a mix between a kebab and a hotdog.  They’re a favourite of many judging by the lines coming from their stand. Brisket sandwiches at King + Bannatyne. Folk fests are not just about music!

3:00 p.m.: With bellies full, we went to the Shady Grove to check out one of the mentor sessions featuring the LYNNeS, the Americana duo from Ottawa formed by Lynn Miles and Lynne Hanson. These mentor sessions are actually a great opportunity; called the Stingray Youth Performers, young musicians are chosen to workshop and learn from the featured musicians, and then are able to perform what they have learned in front of a live audience at the Shady Grove. This was a super relaxed environment, with many people resting off lunch and just enjoying the music.

4:30 p.m.: As mid-afternoon hits, we’re in desperate need of shade, so we venture again to the Little Stage in the Forest and relax while hearing Amythyst Kiah. She is a self-described ‘Southern Gothic’ blues singer from Johnson City, Tennessee. In the background, bugs are starting to make their own music, which only adds to the performance. This was one of my favourite parts of the day, as Kiah played a variety of songs that were just perfect for the venue.

6:00 p.m.: After leaving the safety of the shade at the Little Stage, we ventured back to the food stands to grab a quick dinner prior to the full night ahead of us. Checked out Stella’s and Kyu Grill again. 7:00 p.m.: Went to check out Winnipeg’s own Boniface at the Blue Blue @ Night stage. Boniface, with an indie pop aesthetic, did not disappoint. The crowd loved his stage show, and you could see the passion and love he holds for his craft in the outstanding performance he put on. Boniface put not only emotion but heart into his songs, which created a great atmosphere for the audience. I was up and dancing his whole performance, as were most other folkies in the audience!

8:15 p.m.: Stopped at the beer gardens right next to the Big Blue @ Night stage for a quick beer between shows!

9:00 p.m.: Real Estate, an indie rock band from New Jersey, were next on the stage at Big Blue. They provided a nice relaxing time following the high energy Boniface show. During their set you could really just close your eyes and listen to the guitars and go off into your own world. It was a long set, and they extended their guitar solos for what felt like about 15 minutes!

9:40 p.m.: After catching most of the Real Estate show, we quickly ventured over to the main stage to catch The Strumbellas, the popular pop folk band from Ontario. The main stage was full of folkies, both standing on the sides and relaxing on blankets strewn about in front of the stage. When they started playing their hit “Spirits,” the crowd went wild! 11:00 p.m.: Courtney Barnett, the Aussie indie darling, took the main stage as the last performance of the night. We were able to push quite close to the front and got just a great view of Courtney and her guitar. This was my favourite performance for dancing, as everyone around me was having just a blast during the whole show. What an end to the night!

And rounding it up…

Stand-Out Performance: Having been recommended by a friend to check out Wallis Bird’s show, I was not disappointed. Her skills on the guitar were top notch, and the talent and artistry she put into her show was a great find in my wanderings during the day.

Favourite Moment: Any of the many shows we watched at the Little Stage in the Forest! So far this has been my favourite area of the festival, as it feels just a bit away from all the craziness that is the main grounds.

Friday was a blast, and I’m hoping that Saturday will be just as eventful! Check back tomorrow to see how my Saturday went at the wonder that is the Winnipeg Folk Fest!

Fortunate Ones are a treat for fortunate ...