Quantum Tangle: from Yellowknife to the Junos to the Calgary Folk Fest 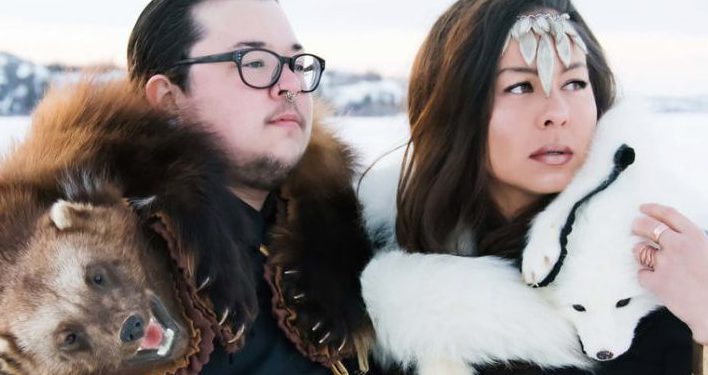 When Greyson Gritt and Tiffany Ayalik, otherwise known as Quantum Tangle, heard their names called out from the stage at last year’s Juno Awards as the winners of Indigenous Music Album of the Year, they were completely stunned – to say the least. The then-musical duo (now a trio) had only put out their 2017 album Shelter as We Go, which fused traditional Inuit throat-singing and storytelling with Métis roots and blues, to stock up their merch stand on the Canadian music festival circuit. They never expected to walk away with a Juno in hand later that year.

“It was so amazing, and part of that was the recognition for what we do,” said Tiffany, who is Inuk from Yellowknife. “It was a good reminder that we just tell our truth, and that is what people resonate with.”

Now, after a summer filled with performances across the country, in Toronto, Winnipeg, Vancouver and more, Greyson, Tiffany, and their newest member, Kayley Inukshuk Mackay, are bringing their blended music and Indigenous backgrounds to the Calgary Folk Music Festival at the end of July.

The group first discovered the power of mixing their diverse backgrounds in music when Greyson and Tiffany were asked to perform at a Circumpolar Indigenous Women’s gathering. Bringing together Greyson’s Anishanaabe-Métis guitar and looping styles with the Inuit story of the Amautalik, the pair found audiences responded well to the innovative performance.

“We (the band) each encapsulate very diverse heritages and cultures,” said Greyson. “Take that times three, and we have a lot of information to work with and a lot of history and knowledge. It made sense to us that we would take these elements and create something beautiful out of it.”

While the group enthusiastically displays and celebrates its Indigenous ancestry, the members also honour their roots in the Canadian North. Both Tiffany and Kayley, who are sisters, grew up and currently reside in the Northwest Territories. This has been and remains a huge part of both of their identities.

“The high cost [of living in the north] can be very isolating,” Tiffany said. “In a lot of ways, it’s a very Canadian experience as an Indigenous person to be sometimes feeling alone and isolated and be looking for your community.”

Tiffany remembered there were definitely times of struggle being an Indigenous woman in the north, but she also said there was plenty of beauty and camaraderie as well.

“We just try to tell our story and share our experiences and hope that people either learn something if it’s not their experience, or can feel some sort of camaraderie if it is,” she said.

As Tiffany and Kayley bring their Inuit heritage, stories, and knowledge into the spotlight, Greyson, who is two-spirited and transgender and has over 15 years of experience performing as a solo Anishinabek-Métis singer-songwriter, said they also use their music to reflect on their journey as a queer person. While this part of their story is not explicit in their tunes, they make a point of dedicating their song “Love is Love” to the LGBTQ+ community during shows to remind people to be careful about depoliticizing the existence of this community.

“For artists who are queer, you tend to have a lot of people who love their music but don’t want to get into the politics of their existence,” they said. “There are always politics attached. My existence is political. Our existence as Indigenous people today still in this land is incredibly political. To try and separate them? That’s some white nonsense.”

As their July 29 performance in Calgary fast approaches, the group is looking forward to sharing its music again and spreading its message of social awareness as well as sharing the stage with fellow musicians such as Saul Williams and Jeremy Dutcher.

However, while the group is excited to perform, it also wants to take the opportunity to remind festival-goers that they need to remain culturally sensitive and respect preferred pronouns.

Kayley said she sees performances as an opportunity to use their platform to speak out about systemic and colonial issues in a way that other people and minorities might not be able to.

“We are in a position where we have the luxury and responsibility to speak up when we can because not everyone can do that,” she said. “There is a lot of responsibility put on people who are absolutely maxed out, physically, emotionally, and financially. We look to them to fix things for themselves, but the system that we have is not in their favour. To heap that responsibility on them even further, that just doesn’t make any sense.”

Not afraid to call out injustice as they see it or to hold people in positions of power or otherwise to account, Greyson said Quantum Tangle always strives to promote respect and integrity wherever they are performing.

“Collectively speaking, we are walking around with a lot of experience and trauma, but also with a lot of gratitude and beauty,” they said. “When we have these experiences that are clearly racist, sexist, transphobic and misogynistic, we don’t want to settle for that. If we have the energy and resources to, we can speak up about it. We have that voice, and we have that power.”

The Stan Rogers Folk Festival: an ...

Five memories from a life in music ...