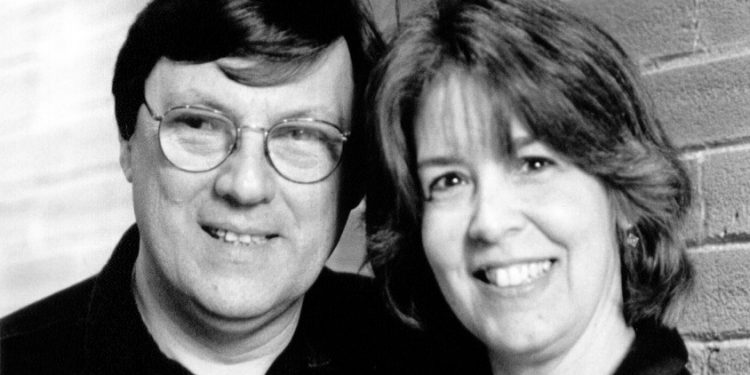 The list of winners of Folk Music Ontario’s Estelle Klein Award reads like a who’s who of Ontario folk royalty.

A lifetime achievement award of sorts named for the force of nature that pioneered workshop stages at folk festivals – among her many other accomplishments – the award recognizes those who have made significant contributions to folk music in the province.

It’s no surprise then that Bill Garrett would find his way into their company.  He’s been in their company – literally – for more than 40 years.

Bill co-hosted Touch the Earth on CBC Radio with Sylvia back in the late ’70s and early ’80s, after initially moving to Toronto to teach guitar at the Toronto Folklore Centre.  He stayed with the CBC until 1995, working as a network music and program producer, and later, as an executive performance producer in Quebec.

Not long after his CBC career came to an end, he started working as a music producer on Sharon, Lois and Bram’s TV show, along with another previous Estelle Klein Award winner, Paul Mills.  He also co-founded Borealis Records with Paul, Grit, and yet another past Estelle Klein winner, Ken Whiteley.  And he, Grit and Arthur were all founding board members of the Canadian Folk Music Awards.

Oh! And let’s not forget to mention that Bill is a singer-songwriter in his own right, performing and recording most recently with his partner, Sue Lothrop.

When the Folk Music Ontario conference rolls around in the fall, we’ll all be treated to a lovely gathering and video presentation in Bill’s honour, and usually there’s an interview session where the recipient shares her or his memories of his or her storied career in folk music.

But we’re impatient here at Roots Music Canada.  We asked Bill to look back on some key moments in his career and share a memory or a reflection with us from each one.   And we asked him to do it, like, right now.

RMC:  How did you get involved in the Toronto Folklore Centre?

Bill:  I was asked to come to Toronto and teach guitar. I had planned on moving to New York, where I had done a bunch of work, but the legal fees to make a permanent move at the time were way beyond what I could afford.

RMC:  Any favourite memories from your time there?

Bill:  Teaching at the Folklore Centre put me in the middle of the Toronto folk scene.  That scene involved Fiddlers Green Folk Club (a great community of folksters that were most welcoming of a newcomer) The Riverboat Coffee House that regularly featured some of the best touring performers, and finally the Mariposa Folk Festival. I was invited by Estelle Klein to join the board of the festival. I spent four years on that board and probably learned more about folk music from Estelle than any other one person. She was a true force of nature.

RMC:  Can you share a favourite memory (or memories) from your time at CBC?

Bill:  Touring across the country by train with Touch The Earth and recording folk performers and songwriters both on board and in their homes stands out as a great experience. Apart from exposing this music community to a wider listening audience, it added to and enriched my own sense of the country.  … I was amazingly lucky to travel and record musicians in every province and territory of the country for CBC Radio.

In 1981 representing Canada at the European Broadcasting Union’s Nordring Music Contest – hosted by the BBC on the Island of Jersey  – I produced an hour-long live concert featuring Kate and Anna McGarrigle, Stan Rogers and fiddler Graham Townsend. Our theme was discovering Canada from east to west through music. For the record, we placed second to Sweden, but we all felt very proud to represent Canada at this international event.

Recording Ry Cooder two different  times at U of T’s Convocation Hall in Toronto. It doesn’t get a whole lot better!

RMC:  How ’bout from working on Sharon, Lois and Bram’s show.  What resonates with you from that era?

Bill:  Television production is really hard and sometime frenetic work.  As the music producers on the show, Paul Mills and I worked with the trio to pick and arrange the songs.  The recording process had us working in a separate studio with what at the time were the best musicians in Toronto.  We would record the music tracks sans vocals, rush them to the TV studio, where the trio would sing live to the tracks as the program was taped.  We later re-recorded the vocals with the original tracks, and this produced the albums that followed.  All of the above was great fun and often exhausting.

RMC:  A favourite memory related to your time at Borealis?

Bill:  Probably the  fifth anniversary of the label. We took over Harbourfront Centre in Toronto on Canada Day weekend in 2001 and essentially presented a Borealis Folk Festival.

RMC:  How ’bout of your time with the CFMAs?

Bill:  Although there were many great moments at the CFMAs, I think one of my favourites was when we were in St. John’s, NL. The awards were over, and all of us organizers headed to Auntie Cray’s restaurant/food store where the great Frank Maher was leading  the weekly luncheon session along with a group of fine trad. players. The combination of good food, friends and great local music left a lasting impression of what folk music was really all about. I was able to return to St. John’s a few years later and record an album with Frank. Much fun that!

Thanks Bill!  We’ll see you at FMO!

Quantum Tangle: from Yellowknife to the ...