Dispatches from the Winnipeg Folk Festival – Day One 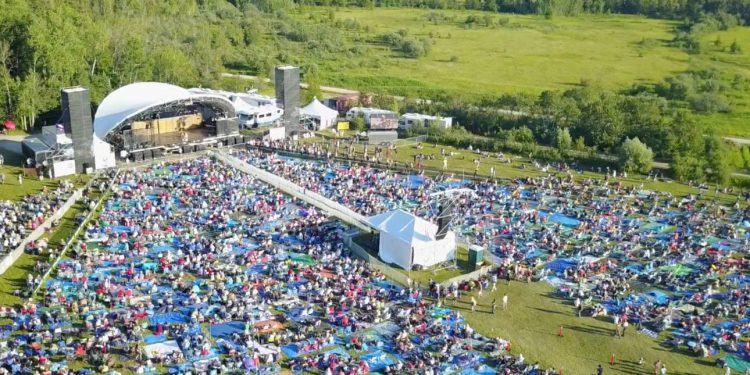 5:00 p.m.: I arrived at Folk Fest with minimal traffic entering the festival, which was pleasant. Thursday seems to be the slower day of the festival, since the only shows going on are at the main stage in the evening, and there’s only a handful of performers. Not many people are at the festival grounds yet, as most are still on their way or living it up in the campgrounds.

6:00 p.m.: Apparently I’m one of the first people to be in the dancing area of the audience at the main stage, as most folkies (a term of endearment I just learned) are taking it easy in the seated section. Music hasn’t quite started yet, but anticipation is in the air.

6:30 p.m.: Roger Roger, a sibling duo born and raised in Winnipeg, is the first act to take the stage this evening. Their set was a wonderful soft start to the festival, as everyone listening to them is enjoying the sun and the atmosphere while listening to their tunes. There’s also a man walking around with a bubble gun, and several folkies, children and adult alike, are playing in the mass of bubbles that’s covering the sky.

7:30 p.m.: The Aussie group Mama Kin Spender takes the stage, and I learned that there is gender parity in the lineup for Folk Fest! As well, people are finally starting to get onto their feet, with more and more people standing and dancing with each passing minute.

8:30 p.m.: Elle King is next to perform, and the moment she begins to speak, the energy within the crowd multiplies. Folkies are all on their feet now, dancing to King’s rock melodies. Her performance energizes the crowd and prepares everyone for the rest of the evening’s performances.

9:30 p.m.: Newfoundland natives Fortunate Ones take the stage and allow the audience a few songs to relax to before the performance of John Butler Trio+. Swaying groups of folkies are abundant during their songs, as the voices of Andrew and Catherine melt perfectly into the background of the evening.

10:00 p.m.: The final act of the evening, John Butler Trio+, took the crowd by storm as most of the campers have finally joined the rest of the folkies near the Main Stage. The crowd is moving, people are singing, and everyone is having a great time. Honestly, the mood of the crowd really gets to you, and by this point, you can’t help but enjoy yourself.

11:15 p.m.: For most folkies, the evening has just begun as campers begin to flow back into the campgrounds. However for me, I am on my way home to Winnipeg to get some must-needed rest in order to function properly tomorrow. Hoping for the full day of festivities on Friday to be just as eventful as this evening!

So to round up the first day of Folk Fest…

Stand Out Performance: Hands down, Elle King’s performance was a favourite of mine. The power in her voice really allowed for her to get the crowd in a vigorous state that remained through the final act of the evening, and I’m assuming remained with the party-goers after the performers had left the stage. Additionally, her on-stage anecdotes were humorous and had the crowd laughing and cheering every time she spoke.

Favourite Moment: Resting in the sun when the first act, Roger Roger, took the stage, just taking in the beauty that is Folk Fest and the world around me: children playing, bubbles in the air, and people gladly chatting with strangers and friends alike. It’s a very wholesome environment, and I was more than glad to be a participant.

Friday will be a more varied day, and I hope to explore the festival grounds more and share it with all the great readers of Roots Music Canada. I’m also hoping to eat quite a bit more, as the food stands are calling my name.  Stay tuned for more festival coverage and other goodies!

Fortunate Ones are a treat for fortunate ...