Nine favourite folk festivals picked by the artists that play them 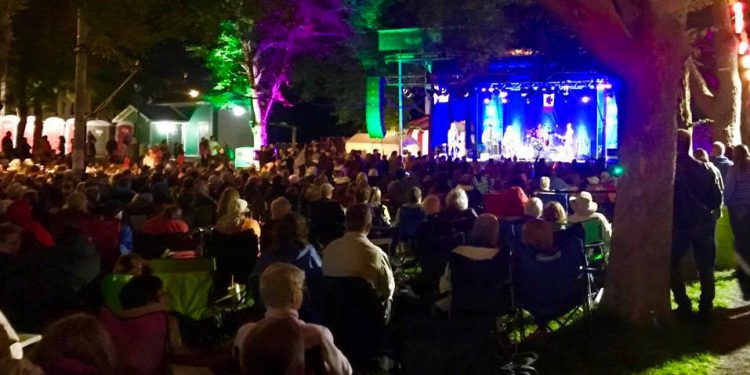 Dust off those lawn chairs and roll out those blankets! It’s festival season!

Whether you are checking out a local event or making a folk fest part of your destination travel, we checked in with Canadian folkies The Once, Rae Spoon, Kim Beggs, and The Mayhemingways to help us create a what-not-to-miss list for Summer 2018.

The Mariposa Folk Festival, often referred to as the Grande Dame of North American music festivals, has been presenting world class folk, roots, blues, gospel, acoustic and world music traditions for over 50 years. Set on the shores of the beautiful Lake Couchiching, the festival offers a wonderful mix of music, arts, and crafts. Camping is part of the experience too, for those outdoorsy festival-goers!

In the words of The Once, Mariposa “has been around for so long that music oozes out of every tree and field. You walk in, and you can’t help but feel hugged by music.”

Bahamas, Bill and Joel Plaskett, Alan Doyle, Buffy Sainte-Marie, Larkin Poe, and Molly Tuttle will all be gracing the stage during this year’s festival.

The Dawson City Music Festival has rapidly become the Yukon’s biggest summer event. Feeling like an adventurous road trip? Pack some camping gear and head north to the 40th annual festival! The remote location – combined with quality music under the midnight sun – makes this a perfect festival for music-lovers seeking a truly unique experience. (For a perfect musical road trip, Kim Beggs suggests checking out the Atlin Music and Arts Festival on the way to Dawson City. http://www.atlinfestival.ca/)

Enjoy the town of Dawson City as it is showcased through performances and workshops in unique venues, from the famous big top tent to the historic Palace Grand Theatre.  A weekend pass grants you access to all of the action!

This year, the Mayhemingways are in the official festival line-up, but a few summers ago they were in Dawson City and “got caught up in the residual explosion of fun times.”

They know how to put on a great party in the North. After a long, long winter up there, this event goes off like a rocket ship! There’s great music all over this picturesque and historical gold rush town, including in a huge awesome tent and in cool buildings like the Palace Grand. The sun doesn’t really go down at this time of year so even early nights feel like all-nighters.

Rae Spoon favours this festival for its “amazing look into life in a far north city” they said. “The hospitality of Dawson City is unmatched, and nothing beats seeing some of the best music in Canada under the midnight sun.”

Skye Wallace, Old Man Luedecke, Snowblink, The Mayhemingways, and Elliot Brood are a few of the acts you will catch up there this summer!

The 42nd annual Newfoundland & Labrador Folk Festival is poised to be another incredible weekend celebrating Newfoundland and Labrador’s unique culture with great traditional music and interactive workshops where you can learn a dance, a tune, or a tale.

The Once feel like the festival is “home,” they said. “It’s under the trees in the park. The music is always incredible and I’m not sure there’s an audience quite like it anywhere else.” Even though The Mayhemingways have never been to this festival, they’ve been to Newfoundland enough times that they have become quite smitten with “the people, the musical traditions, the land, and all of the intangibles.”

The weekend is packed with talented musicians, including Fortunate Ones, Fred Penner, Buddy Wassisname and the Other Fellers, The Ennis Sisters, Sherry Ryan, The Dardanelles, The Once, and Andy Irvine, just to name a few!

Since its inception, Blue Skies has been known as a musician’s festival. Providing a great party atmosphere and a tight community, this festival has a pretty loose environment that allows performers, audience members and organizers to relax and enjoy the experience.

The Mayhemingways haven’t attended the festival in many years, but the warm feelings still linger.

“It’s a relatively small festival, but the organizers and fest-goers like it that way. The land on which it takes place has limited room so folks have to enter into a raffle to win full weekend passes. Last time I was there I remember a wide range of music, but I also remember wandering into the woods and finding phosphorescent wood that was decaying, and playing some a cappella vocal games with people I had just met.”

The Edmonton Folk Music Festival is an annual four-day outdoor music event held the second weekend of August. With the skyline of Edmonton as the backdrop for the main stage, the festival showcases folk, Celtic, bluegrass, blues, gospel, roots, and worldbeat acts. The festival features six active stages throughout the event, so there are diverse possibilities for entertainment.

Tip: If you are looking for accommodations, The Bennett Centre is located right across the street from the folk fest site. They have private hostel-style rooms that can accommodate up to four individuals (four bunk beds). They offer four-night accommodation packages, which can even include parking for reasonable rates, so book soon!

The Once called the Edmonton Folk Fest “…one of the best in the country for talent,” adding, “They take a chance on the new. Hope to make their mainstage someday. Fingers crossed.”

Rae Spoon added that this is “one of Canada’s largest folk festivals. You can really feel the loyalty of the audience to this festival. They book world class headliners and lean towards roots music.”

The Decemberists, Alex Cuba, Hurray for the Riff Raff, The Milk Carton Kids, Neko Case, Regina Spektor, and Shakey Graves are a few gems to catch during this year’s festival.

The Goderich Celtic Roots Festival is a three-day outdoor festival showcasing Celtic music, dance, and art on five separate stages. With performances ranging from small intimate affairs to large spectacles on the main stage, there is sure to be something for everyone. In addition to the hours of musical entertainment, the festival features local food, superb crafts, art demonstrations, a children’s activity area, a beer garden, and an evening market.

The Once call this festival “all heart with a big community vibe.”

The Good Lovelies, Union Duke, The Fitzgeralds, Heather Rankin, and Goitse will all be performing at this year’s festival, along with other amazing national and international acts.

Odetta, Tom Paxton, Ritchie Havens, Michael Smith, Valdy, The McGarrigles, and Eric Bogle all braved the rain through the first years of the event and established Summerfolk as one of the premier events in folk music. The 43rd annual Summerfolk in Owen Sound features a limestone amphitheater and the “Stan Rogers Memorial Canopy” on the main stage.

Summerfolk is all about passing on stories from generation to generation through stories in the form of song, spoken word, or crafts. Its history is connected to the very creation of the Canadian folk music fabric, and it has an excellent reputation.

The Mayhemingways played this festival last year and had a great time. “This year is the 43rd edition, so it’s a super well-oiled folk machine. Beautiful setting and always a really neat range of music. Artists are treated super well throughout the weekend.”

Some of the performers this year include Sarah Harmer, Susan Aglukark, and Bahamas.

The Mayhemingways grew up going to this folk festival in their hometown, and they never miss it if they can help it!

“It used to be slightly later in August and was a symbol that summer was wrapping up,” they said. “The format has changed a little over the years, but the main days of the festival remain completely FREE! The setting is on a natural hill right beside the Otonabee River. [There are] several stages, a wicked children’s area, and a pretty laid-back vibe.”

The “community feel and intimate workshop and concert stages during the day” hold major appeal for Rae Spoon.

Bedouin Soundclash, Basia Bulat and The Spades are featured in this year’s festival.

The Gathering: a celebration of Fire-Food-Music takes place in Burlington, which is located on the Baie Verte Peninsula in the Green Bay region of Newfoundland and Labrador. A little over six hours’ drive from St. John’s, there is only one road that leads there, so don’t worry about getting lost! The entire festival grounds are also open to all ages, as alcohol is not sold or permitted on site at any time during the events. With RV and camping options for accommodations, this festival is a great opportunity to get back to nature while enjoying some of Canada’s finest entertainment and food.

The Gathering is a festival that was started by Newfoundland comedian Shaun Majumder. The Once would go every year if they could to this “haven of music and food and magic and hikes with comedy mixed throughout,” they said. “You won’t find a festival like it. It’s almost like Shaun Majumdar thought of everything.”

The Once and The Mayhemingways are two of the fine acts in this year’s festival line-up, which also includes Steve Poltz, Sherman Downey, Rich Aucoin, George Canyon, and Duane Andrews among others. Not to be missed are the chef hikes with Charles Part and Jonathan Gushue, as well as comedy from Steve Patterson, Mike Lynch aka Cecil O’Brien aka Randy Lee, and of course, Shaun Majumder.

Correction:  a previous version of this story misidentified the line-up at this year’s Peterborough Folk Festival.