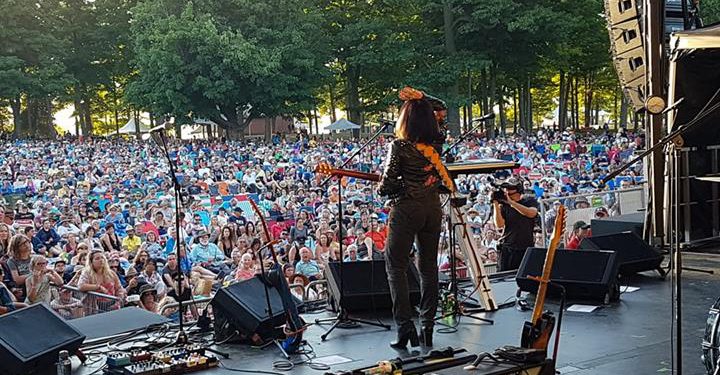 There’s something distinctly uncool about the Mariposa Folk Festival logo, still prominent at the festival, held once again in Orillia, its birthplace 58 long years ago.

Apparently Ian Tyson designed it, back in the day, and Murray McLauchlan tidied it up. Today (especially with the slogan “Song.Story.Dance.Craft”) it seems at first glance quaint and dated.

Last weekend Mariposa proved it is now strikingly contemporary and is unapologetically happy to offer pop and rock groups with only the vaguest connection to “folk” (however you define the F-word) cheek and jowl with veteran folkies doing songs and tunes as traditional as Maritime sea shanties and Quebec jigs and reels.

What is old again is new again, writes Richard Flohil – like the Mariposa logo.

It was Mariposa’s most successful festival so far, with record attendances (more than 6,000 people a day}, dozens of musical highlights, and an unmatched spirit of joyful community.

And yet links to the festival’s storied past were still evident — however loud the music on stage. And perhaps that old logo isn’t strangely out of place after all. Perhaps everything old IS new again.

Take the first night’s programme. Who’s this to open the event in broad daylight sunshine? Why, it’s Valdy, grizzled, semi-bearded, and with a face full of laughter-lines and smiles. He’s been doing this for damn near half a century, and he’s a master at setting a scene, establishing a mood, and lifting spirits.

And who’s closing tonight? Walk Off the Earth, that’s who, crashing onstage with a battery of flaming pyro, jets of dry ice, flashing lights, explosions, smoke bombs — and crunchingly loud music. And all co-ordinated by a 17-person production crew.

OK, you must have seen the video of this band from Oakville who perform a catchy cover tune, all of them playing a single guitar — dammit, it’s got nearly 11 million views on YouTube. They do it in the show, of course, as well as the schtick where a guitarist, mid-solo, flings the instrument over his head to be caught by the guitarist behind him, who finishes the solo. (I dread to think of how many guitars were killed rehearsing that.)

Well, the tunes, stripped down, are fluffy and pop-ish, but the presentation — with all that massive production — is a series of Cirque de Soleil set-pieces, with the sound levels cranked up to 12 (let alone 11).  And the audience stayed until the very last note, and left with smiles a mile wide. And what’s not to like about that? Walk off the Earth do that guitar thing at Mariposa. Photo by Dustin O’Donnell.

Over in the beer tent (sorry, “pub stage”) the highlight was a rocking set by Fast Romantics, a Toronto indie band making its folk festival debut. With Matt Angus as the charismatic lead singer and local Orillia singer Kirty on piano, guitar and (for a few short bars) trumpet, the band was powerful and fun. And the audience loved them.

The Saturday night concert featured hit song-maker Nick Lowe and Los Straightjackets, a killer band wearing Mexican wrestling masks.  The set closed with “I Knew the Bride When She Used to Rock and Roll,” and he left to massive applause. (He was not particularly happy, however — when asked if he wanted to do an encore. His response was a terse ,“Fuck no…”)

My discovery of the festival, however, was Atlanta sisters Rebecca and Megan Lovell, who call themselves Larkin Poe, and are roots-blues based guitarists and singers with a unique sound — and anyone who delivers a Son House song has me in their corner cheering.

The sweet highlight came in the middle of the evening: the annual appearance of Orillia native Gordon Lightfoot, who sang two songs — and then presented Bonnie Dobson with a Songwriters’ Hall of Fame Award for her classic tune “Morning Dew.” Of course she sang the song, with Kevin Breit on guitar and Rebecca Campbell on harmony vocals. It was a quiet, gentle, lovely moment.

The Sunday main stage show offered my personal highlight — an incendiary, stunning, power-packed performance from Buffy Sainte-Marie. At 77, she has never sung with such passion about politics that matter, about love, about the environment, about what this tired world needs to survive if we’re all going to continue spinning around the sun. Frankly, I cried — for her commitment, for her songs, for her beauty, for the fact that she’s been doing this since the early sixties and is not slowing down.

Bahamas, a sort of new age pop band with a devoted fan base, followed her — I took my tears to the backstage bar; I couldn’t have cared less about the band. (In parenthesis, this may have been new AD Liz Scott’s only mistake; Buffy should have closed the show; none of us can be up where Buffy belongs.) But, of course, it’s the daytime workshops that matter — and the festival you saw at those would inevitably – given seven different stages – have been different from that of the person grinning through the show next to you the night before.

This writer’s highlights certainly included Montreal singer-songwriter Leif Vollenbekk; his quirky, odd songs were delivered in a voice that, initially from a distance, reminded me of a less manic Mary Margaret O’Hara. He was omnipresent on workshop stages and was an affable host.

Later, in a hilarious afternoon workshop, Breit played with the Heavyweight Brass band (drums, tenor sax, trumpet and trombone) and pianist Jenie Thai who charmed the audience and more than kept up with the shenanigans Breit and the band cooked up.

Wendell Ferguson, a brilliant guitarist and a comedian, shared a workshop with Earle and Coffin, two kids from Newfoundland who play blues but will grow into even more roots music styles; what a strong future they have.

Of, there was more — much, much more (there always is).  But these quick notes will have to suffice.

Mariposa is Canada’s oldest folk festival. And it’s regaining its original role as one of Canada BEST festivals.

See ya’ there next year?

And we’ll all see totally different festivals at the same time and in the same park.

Richard Flohil goes to four or five festivals a year and has done since he was invited to host a blues workshop at Mariposa in 1965. He’s a former A.D. at Mariposa (1988-92) and took part this year at a workshop about the Horseshoe Tavern, a legendary Toronto bar at which he has, since the late ‘60s, spent too much time and money,

He may be old, but as Muddy waters said, he has young fashioned ways, and he’ll be at Calgary, Canmore, Edmonton and Salmon Arm before his remains return to Toronto, exhausted and sleepless, in August.

Discover this Italian alt-folk duo at the ...