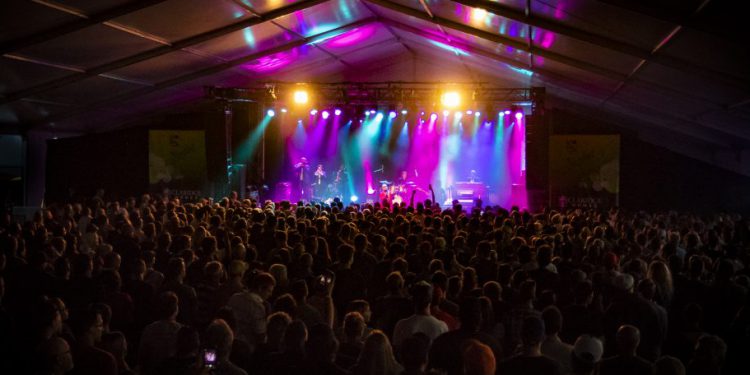 It was room temperature Friday night at Ottawa’s living room full of blues, but it was about to heat up. Three picture-perfect days of music were on deck – including a wealth of Ottawa talent:  Tara Shannon, Alanna Sterling, Cody Coyote, and more.

The weekend opened with Jethro Tull Friday night in full celebratory spirit. Ian Anderson energetically led us through the band’s 50 years, with the help of video-taped song introductions from many past associates. Some of the guests even played along with the band.

At festivals, you’re never going to catch all the acts you want to see. Good thing you often run into good friends who impress on you how regrettable it is that you missed this or that act. Friday it was A.J. Croce and the intense gospel Motown style of St. Paul and the Broken Bones that we’re some of the other stand out acts for people I spoke to.

Saturday was warm, but Brock Zeman was under the tent with a good crowd in the shade sharing his rugged, edgy brand of folk. The big tent was fitting given Zeman’s most recent release is called The Carnival is Back in Town. Brock Zeman performing at the RBC Bluesfest in Ottawa on Saturday, July 7. Photo by Scott Penner.

Liza Anne was out of the heat, even sporting a beret, in the Barney Bentall lounge, sharing, in her unapologetic fashion, her pop folk stylings. She was backed by a strong band well-suited to her songs and soaring vocal style.

Saturday culminated in a performance by pop artist Shaun Mendes, whose songs were well-known by the audience, who were all singing. He was gracious, and during his song “Youth,” he said he’d like to share with all of us, truly what the song means to him. He said:

“When I think of the word “youth,” I don’t think of a term that describes age. I think of a word that describes freedom and happiness. … Every time a terrible or horrific event happens in the world, it feels like our youth is pulled and ripped away a little bit more each time. And tonight every single one of us, we have the ability to make a change in the world for the better. It’s up to us to stand our ground.  I honestly believe no matter what happens, we won’t let our youth be taken away from us!”

The audience responded by serenading him with the rest of the song .  An estimated 30,000 people were in attendance Saturday night.

Sunday was hotter, and appropriately so, given the intensity of the fiery acts to come.

Ottawa’s Tara Shannon brought her love for songwriting and a full band to Bluesfest’s main stage.  At one point, she was joined on stage by the mother of Jonathan Pitre, the young boy referred to as “Butterfly Boy” because of his devastating skin disease – recessive dystrophic epidermolysis bullosa (RDEB) – who recently passed away. Tara co-wrote a beautiful song for Jonathan, and her entire show was pro, yet moving, and well suited for the main stage. Alanna Sterling dazzled the audience, steering from guitar, to trumpet to keyboards to saxophone. Alanna presented a set of her thoughtful, catchy jazz pop folk originals with her band, the Silvers. You can hear the Amy Winehouse and Sublime influences in her work.

Cody Coyote played the Blacksheep stage, but also joined Tara Shannon earlier to perform a single they released earlier this year. Cody had a message in his raps of truth and of action in support of Indigenous people. One of his raps called for Indigenous men to be proud of their locks. Cody is a charismatic entertainer who delivers his music with love, thoughtfulness and an inclusive message. Some of you may have caught him at Folk Music Ontario’s conference last year.

Sisters Rebecca and Megan Lovell, Larkin Poe, hailing from Atlanta, descendants of Edgar Alan, almost blew the roof off the tent. Becky on lead vocals, and Megan, on dobro – playing it a la a rocking out Jeff Healey – put on a rockin’ yet soulful performance.  The southern influence was unmistakable in the sound, the Bible belt-style references in the lyrics, and even in their choice to play a Son House cover. Larkin Poe performing at the RBC Bluesfest in Ottawa on Sunday, July 8. Photo by Scott Penner.

Next up at the tent was a name that should be familiar to roots music fans:  that of multi-award winning artist Molly Tuttle. She is an amazing banjo flatpicker, who also plays clawhammer and crosspicking style – a little something for everyone who enjoys bluegrass picking.  And I haven’t yet mentioned her voice, with its charming southern lilt. She currently calls Nashville her home and has a wonderful band playing with her, including Hazeldon Ciaccio, her neighbour, on upright bass and sweet subtle harmony, and violin player Duncan Wickel. Molly played her own songs, including a poignant new one called “Snow and Rain”off her soon-to-be released full-length album, but she also played some Glen Campbell and Townes Van Zandt. It was a solid show across the board.

The night ended under the same tent with the not-to-be-missed, Beth Hart, a riveting, fiery, passionate rock act!

I’d encourage all of you to get out and enjoy some of the wonderful Canadian festivals this summer!