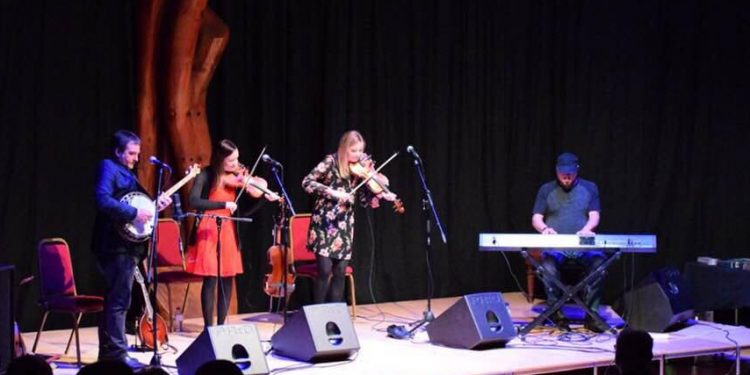 One of Atlantic Canada’s most exciting Celtic traditional groups has new holiday music out this year.

Còig, the quartet of accomplished multi-instrumentalists Chrissy Crowley, Rachel Davis, Darren McMullen and Jason Roach, released Carols Too yesterday – and it’s kind of what you might expect from this crew.

There are Christmas classics like “Silent Night,” “the Christmas Song” and “God Rest Ye Merry Gentlemen.”  Then you’ve got the instrumentals and medleys, such as “Scrooge Tunes,” “Have a Bari Merry Christmas” (featuring “Oh Christmas Tree” and “Go Tell it on the Mountain”) and the focus track, “The Spree we had at Christmas,” which includes strains of “Good King Wenceslas.”

But really, is it proper to have a Maritime Christmas album without sneaking a mention of drinking in there somewhere?  That’s where Còig’s cover Dave Gunning and Jamie Robinson’s “Daddy’s Beer” comes in (Yes, it really is a Christmas song).  I won’t give away the story, but it’s a lot of fun.

The new album is typical Còig, shifting between century-old tunes of past generations and original and upbeat compositions featuring the band’s range of over a dozen instruments (vocals, fiddles, piano, guitars, banjo, mandolin, viola, bouzouki, whistles, and more).

The Cape Breton quartet has earned enthusiastic reviews from audiences around the world and an impressive list of accolades for their recordings – Rove (2017), Carols (2015) and Five (2014) – including a Canadian Folk Music Award, a Juno Award nomination and multiple East Coast Music Awards and Music Nova Scotia Awards.

You can catch them live this month!

Have a listen to “The Spree we Had at Christmas”