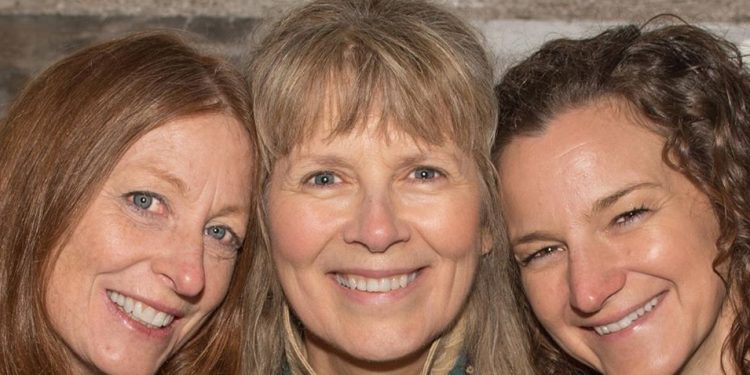 Last weekend, popular seasonal harmonies trio Boreal got their Songs For The Snowy Season Ontario tour off to a wonderful start – and from now through December 21st, they will continue sharing concerts with five more communities and cities.  Long-time group members Tannis Slimmon and Katherine Wheatley – both award-winning Guelph singer-songwriters – are pleased to introduce their talented new bandmate, Orillia’s Angie Nussey, who has taken over for Guelph singer-songwriter Jude Vadala.

Tannis’ career has spanned more than 35 years. In that time, she has been a member of the Bird Sisters and sung harmony for many Canadian music stars including the Rheostatics, David Francey and Valdy. She also received a Canadian Folk Music Award for Contemporary Vocalist of the Year. Her solo album, Lucky Blue, was named one of the Top 10 Albums of 2008 in the Penguin Eggs magazine critics’ poll. It received a Golden Quill Award for songwriting and an Independent Music Award for Best Folk/Roots Song.

When not performing with Boreal, Katherine performs as a solo artist,  as a member of Betty and the Bobs, and as one half of Wendell and Wheat with Canadian Country Music Hall of Famer Wendell Ferguson.  Her song “Hallelujah” won a 2009 Golden Quill award, and two of her other songs were selected for the new Rise Again songbook. She has performed on CBC’s Vinyl Café and CTV’s Canada AM. Through her program Youthsongs, she has written over 200 songs with kids and produced over 25 school CDs. She also works as a singer/zodiac driver in Antarctica and the Arctic.

Although she’s the newest member of Boreal, Angie has decades of experience performing on stage. This award-winning Canadian recording artist and producer from Orillia has released six full-length albums and won over 15 industry awards for song-writing, vocals, and performance since 1999. She grew up in Lively, Ontario (near Sudbury) and has also written plenty of – you guessed it – songs about snow. Welcome Angie!

To make this year’s performances special, each member of the trio has dug up old songs and written new ones about winter. Their love of harmonies, their combined songwriting skills, their beautiful voices, and the joy they feel singing with each other are sure to make Songs For The Snowy Season an unforgettable celebration of winter and the spirit of the holidays.