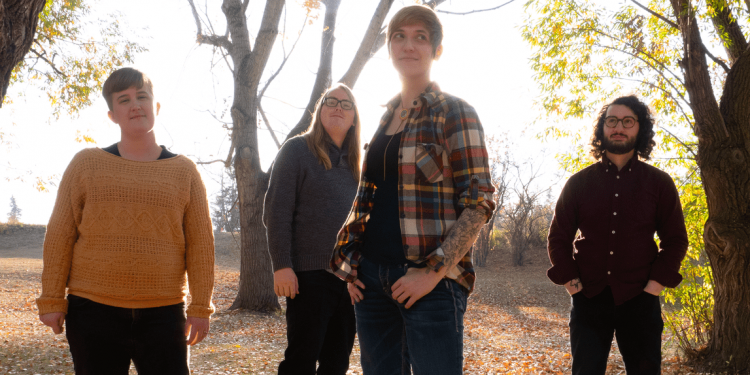 Although soft-released digitally at the end of 2022, the debut album from Edmonton alt-folk outfit Payphones will surely get your year off to a moving start with eight songs that explore isolation, illness, queer heartbreak and personal growth, all written by frontperson Naomi Jichita over the past decade. Rioting Heart is a healing journey, with many visceral twists and turns along the way.

Payphones played their first shows mere months before the world shut down in March 2020. Over the ensuing two years, they refined and performed their music for an audience of one—a very good dog named Ruby—while attempting to overcome isolation by seeking out local connections to make Rioting Heart a reality. Subsequently, Payphones was awarded a Major Projects Grant from the Edmonton Arts Council, and Naomi was selected to be a TD Music Artist in Residence at MacEwan University. When pandemic restrictions were eased, the band was more than ready to have engineer/mixer Conor “Conch” Wharton capture their sound at Edmonton’s Resonate Music Studio.

“We began the group with just Robyn and I,” Naomi explained, “playing our tunes on two guitars with vocal harmonies. Robyn’s spouse, Laena, eventually joined us on piano, and this definitely changed the energy of the music, turning the songs from slow and melancholic—my default vibe—to being more filled out and bouncy. Laena also added a third vocal harmony, and we began to really settle into a more alt-folk/rock sound inspired by The Tragically Hip and early Barenaked Ladies.”

The addition of Aaron on drums brought even more energy to Payphones’ approach, and his experience as a recording tech and choir arranger allowed them to explore further creative avenues. The result is a collection of writers and musicians who feed off their unique chemistry, but more importantly are committed to bringing out the powerful messages within Naomi’s songs.

“These songs were once relics of pain and isolation,” Naomi said. “Now, they are given new life as pieces of art, forged in mutually supportive and artistically fulfilling collaboration.”

That can clearly be heard in Rioting Heart’s first focus track “Can’t Escape It,” which Naomi described as being about falling in love with someone dealing with mental health issues they aren’t able or willing to work on, and how that reverberates with everyone close to them. Those feelings are summed up in the chorus, “I know that I’m falling for you, but I’m not sure that I can handle what you’re falling into / And though every part of me aches, the emptiness has been the only place I feel safe.”

Similarly, Rioting Heart’s title track tells the story of someone falling in love with an emotionally unavailable person, and how this leads to a cycle of pain and denial.

Naomi explained, “The common narrative in both is the siren song of suffering, the morbid comfort in the resignation to chronic, banal pain when it’s the only thing you’ve ever known. There’s a strange comfort in the familiarity and identity of it.”

Although Naomi has struggled with physical and mental health challenges that have led them to become an outspoken advocate for anyone who doesn’t fit an “acceptable” societal image (i.e. able-bodied, straight, cisgender), the beauty of their songwriting is that it is rooted in emotional themes to which anyone can relate. In this way, Payphones follows the trail blazed by other western Canadian artists such as Tegan & Sara and Rae Spoon, bringing a message of greater inclusivity to the masses through music that upon first hearing sounds familiar, but reveals multiple layers with each listen.

As the track list to Rioting Heart progresses, the journey comes into focus: from resignation, to self-awareness, to determination for a better life, to hope, and loving connection. Rioting Heart by Payphones is available on all streaming platforms and from Bandcamp.

A few of Corby’s favourite songs from ...