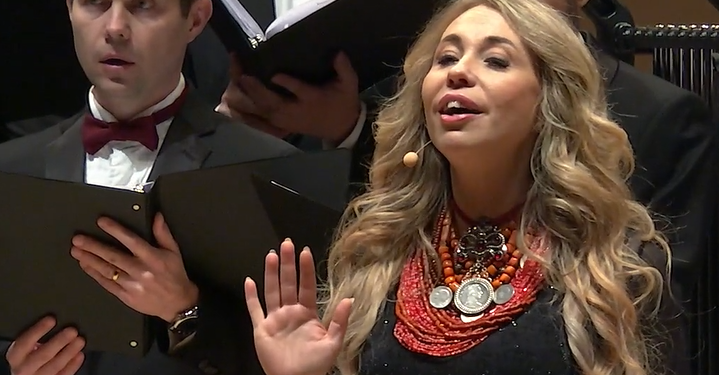 Ukrainian-Canadian singer-songwriter and composer Marichka Marczyk, known for her work with Lemon Bucket Orkestra and Balaklava Blues, sang at Carnegie Hall on Sunday as part of a 100th anniversary celebration for the 1922 American debut of the Ukrainian National Chorus – and in particular, its introduction to American audiences of the song “Shchedryk,” better known to us as “Carol of the Bells,” by Ukrainian composer Mykola Leontovych.

It was the year that Russia declared Ukraine part of the Soviet Union, ending the country’s efforts to solidify its independence in the wake of the fall of the Russian empire.

Leontovych would be executed by a Soviet security agent in 1921.

The anniversary event was hosted by Oscar-winning director Martin Scorsese and Emmy-nominated actor Vera Farmiga and featured the Ukrainian Children’s Choir, the Ukrainian Chorus Dumka of New York, the Ukrainian Bandurist Chorus of North America and the Choir of Trinity Wall Street.

It was a fundraiser for the Rebuild Ukraine campaign, and it was attended by a number of Ukrainian dignitaries and even some Ukrainian soldiers, who earned a standing ovation from the audience.

Marichka opened the show, entering the theatre from the rear, and walked through the audience to the stage as she began singing a 1,000-year-old song whose title translates in as “Oh How It Was Long Ago.”

Marichka is deeply impacted by Russia’s invasion of Ukraine. She was born in Soviet-controlled Kyiv in 1976 and earned a degree in ethnomusicology at Ukraine’s National Academy of Music.

Her brother is fighting there right now. His wife and children are refugees.

Two of her cousins died on March 2 when Russians shelled their apartment building near Kyiv.

Marichka herself nearly became a soldier for her country during the Russian invasion in 2014.

She had met her Ukrainian-Canadian husband, Mark, during the Euromaidan uprising – which occurred after then-president Viktor Yanukovich, under pressure from Russia, backed away from plans to bring the country into the European Union.

She had helped build barricades and bring food and medical supplies to protesters.

When Russia moved in to annex Crimea after the flight of Yanukovich at the end of the revolution, and when Russian-backed separatists took over parts of eastern Ukraine in 2014, Marichka and Mark signed up to fight for Ukraine.

But as they waited for a bus to take them to Donetsk Airport, singing a thousand-year-old song for the soldiers who were returning from battle, the commander told them he would not risk their lives by sending them to the front lines.

Instead, he insisted that they keep both themselves, and, by extension, their knowledge of tradition alive for the coming generations.

She has been doing that ever since, and since the start of the war, she has also been furiously trying to raise funds for the Ukrainian war effort.

She contributed that cause once again on Sunday.

Marichka and Mark’s duo, Balaklava Blues, has a brand new album out, by the way.  You can check out the latest single here: