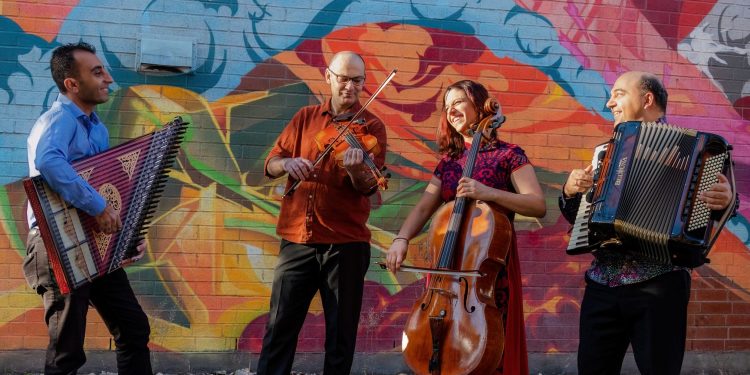 “We were rehearsing when a mortar struck the music conservatory complex in Damascus in 2014,” violist Omar Abou Afach told me in 2020 when I was working on an article about Taraf Syriana for Penguin Eggs Magazine. Omar performed both violin and viola with Syria’s National Orchestra from 1993-2015 before immigrating to Montreal. He elaborated about what life was like as a musician caught in the middle of a war, and what happened after that 2014 attack, which caused numerous casualties at the arts centre in Syria.

“After the bombing stopped, we were sure that no one would attend that evening’s concert at the Opera House, just 100 metres away, but that night the hall was full,” he said. “Even during wartime, people came to every cultural event. I think it was the only place where people could get a breath of normal life.”

Omar Abou Afach is part of a Montreal-based ensemble called Taraf Syriana, a quartet of conservatory-trained virtuosi, which also includes Naeem Shanwar (qanun), Noémy Braun (cello) and Sergiu Popa (accordion). The group is dedicated to the folk music of Syria and its neighbours, and it just finished its debut CD, which I was fortunate and honoured to produce.

“Taraf” is the Romani word for musical group. The Domani, the Romani community of Syria, was estimated to be 250,000 before the war. The Domani migrated from India over 1,000 years ago, arriving in Persia before eventually settling in Syria. One of Syria’s most renowned Romani musicians was Mohammed Abdul-Karim (1911-1989), who was known as the “Prince of the Bouzouk” and composed the tango on their debut recording that focuses on the diversity of folk music from the region.

Reminiscent of Abdul-Karim, the members of Taraf Syriana often push the boundaries of how their instruments are typically played. Before immigrating to Canada, the group’s qanun player, Naeem Shanwar, worked as a professor of music at the University Al Baath in Homs, Syria (2012-2013).

“The qanun is a 78-stringed instrument that dates back nearly 4,000 years,” he explained. By comparison, in western classical music, Baroque is considered “old.” Vivaldi’s “Four Seasons” was written nearly 300 years ago, in 1723.

“The qanun is known in much of the Middle East, north and west of Africa, central Asia, and southeastern regions of Europe,” he added.

Naeem has become an ambassador of the instrument. Today, he’s an instructor at Montreal’s Centre des Musiciens de Monde and is also the author of Teaching Qanun to Children. In concert, he is known for taking the instrument to new levels. In a recent radio interview, he demonstrated the qanun’s vast range (and his own virtuosity) when playing an excerpt of “Winter” from Vivaldi’s “Four Seasons,” a piece that he performed as a qanun concerto in Syria before moving to Montreal.

Taraf Syriana’s repertoire also includes Romani music from Macedonia, such as “Jovano Jovanke,” which is performed in many parts of the Balkans and Middle East.

“It’s an old ‘Romeo and Juliet’ type of tragic story where parents don’t approve of who their children love. It could be because of ethnicity or religion,” explained Sergiu Popa, Taraf Syriana’s accordionist. Sergiu is an instructor at Montreal’s Concordia University and is often thought of as a living encyclopedia of Eastern European folk music. He grew up in Chi?inau, Moldova and is part of one of Europe’s Romani musical dynasties.

Analekta recording artist, Noémy Braun is the creator of a cello-like instrument with two additional strings called the sestacorda.

“I wanted to imitate instruments such as the Indian sitar, the kemenche (a bowed instrument from the eastern Mediterranean) and the guimbri (a three-stringed box-lute from Morocco),” she explained. The versatile sestacorda has became a key part of Taraf Syriana’s repertoire.

For centuries, music has travelled in both directions between the Balkans and the Middle East, exemplified by the famed Ottoman brass bands in Eastern Europe. Romani folk songs from the Balkans are popular throughout Turkey, Syria and beyond, and the musical migration continues to this day. Taraf Syriana shows how that tradition has evolved and that Montreal has become an important, if unlikely centre for both Syrian and Romani music. Their debut CD includes a host of guests that have immigrated to Montreal in recent years. Dan Armeanca is a legendary Romani guitarist and singer who was born in Dambovita, Romania. Nazih Borish is one of the world’s top virtuosos of the oud and founded the Syrian Oud School in his hometown, Lattakia, before moving to Canada.

The other lead vocalist on the album is Ayham Abou Ammar, who Canadians were introduced to through his starring role in Peace By Chocolate. The award-winning film is about a Syrian family who rebuilt their chocolate company in Nova Scotia. Ayham was born in Sweida, Syria and is a graduate of the High Institute of Music in Damascus.

Taraf Syriana came together during the COVID-19 pandemic, with remote rehearsals and initial concerts online. Part of their repertoire reminds us of the toll pandemics have taken in prior centuries. The epic love song “Qadukka el Mayyas” was written by Mulla Uthman Al Mawsili (1854–1923). The composer was born in Mosul, Iraq, and as a child, barely survived after contracting smallpox, which left him blind and disfigured. Uthman grew up to be a star across the region, with concerts in Egypt and Turkey, where he even performed for Sultan Abdul Hameed, ruler of the Ottoman Empire from 1876-1909.

The group’s repertoire includes songs from many of Syria’s minorities.

“In Aleppo, Damascus and other cities, you can hear this diversity in music, on the streets and on the radio,” recalled Omar, “and that includes Arabic, Kurdish, Syriac, Armenian, Iraqi, Turkish and Romani music. This program is our dream,” he added.

The group will celebrate that dream with the release of its debut CD on Lula World Records tonight at Toronto’s Lula Lounge.