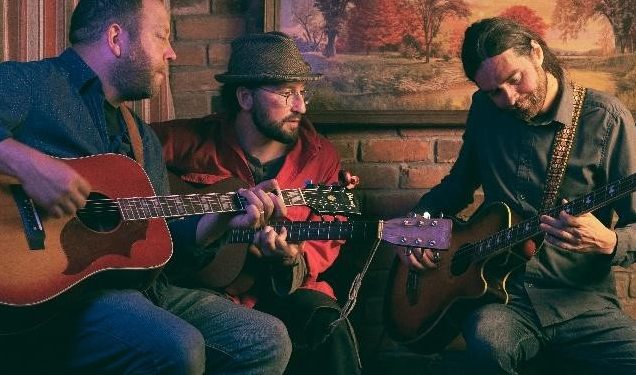 After an 11-year hiatus, Niagara Falls, ON favorites A Sea of Gold and Burgundy returns with the new EP Ghosts In These Walls, a four-song testament to friendship, forgiveness, and the redemptive power of music. While founding members Carl David Onofrio, Aaron Berger (Blue Stars, BBG, Perpetual Peace Project), and Nathanial Goold (Blackflies, BBG, Electric Wildlife) never stopped writing and performing as members of different bands, the pandemic, along with the sudden death of their former manager, led the group to realize their unique musical chemistry anew. With nearly 20 album credits between them, Ghosts In These Walls is the group’s first release in 11 years. When traditional venues shut down amid the COVID pandemic, the seasoned multi-instrumentalists re-met at a mutual friend’s house and began to jam together, quickly rekindling the creative sparks that fueled their earlier 2000 incarnation. Soon after, they were tapped to perform at a memorial for their former manager Robin Morse. They officially reunited as A Sea of Gold and Burgundy in March of 2022, performing their first public show in more than a decade.

Buoyed by fan requests and recognizing how special such musical bonds can be, it wasn’t long before the trio went back into the studio. Produced by Pete Haverkamp and financed by the Niagara Falls Cultural Development Fund, the resulting four-song EP finds the trio older, wiser, and reenergized.

“Ghosts In These Walls,” a strummed ode to the healing power of solid friendship, shimmers with Carl David, Aaron and Nathanial’s seasoned harmonies and unrushed playing. “Palace of Fates” expresses a secular view of the mystical, informed by Nathanial’s growing up — and out —of performing faith-based music. “Lady” is at once upbeat and plaintive, uplifted by piano and tambourine as the trio stretches out the chorus in tight harmony. “Midnight Rain,” the song that Robin once requested to be played at his memorial and which ultimately brought the group back together, plumbs the heart of a late-night thinker as they move toward a state of acceptance.

A Sea Of Gold and Burgundy are back for good. Tell your family, friends, and even the ghosts in these walls.