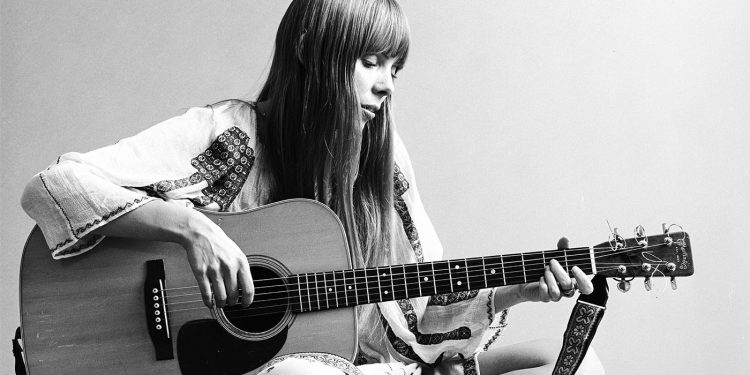 With the recent announcement of Joni Mitchell’s first concert in 23 years at Washington’s Gorge Amphitheatre this upcoming June, some Joni fans gathered in Toronto’s HotDocs theatre this past Wednesday afternoon to delve into Joni’s Blue album.

The lecture was the third in HotDocs’ Curious Minds series, which gives fans the opportunity to explore six classic rock albums. Other musicians whose work is being examined are The Beatles, The Beach Boys, The Band, Carole King and Simon & Garfunkel.

“Blue is not only an album of musical greatness through the use of alternative chords and thought-provoking lyrics, but it also really changed the music industry and started the singer-songwriter genre of music,” Mike told Roots Music Canada after the event. “It is the type of music that transcends generations and will affect you just as deeply if you listened to it 50 years ago or 15 minutes ago, and I’m just happy people still appreciate it,”.

Throughout, the two-hour lecture, the sold-out theatre of music buffs learned about the social and historical content of the album and the period of Joni’s life in which she wrote it.

“The Blue album is not only a monument in the music of the 1960s and 70s but is an album that solidified Joni Mitchell’s fans and her place as a great musician,” Mike said at the start of the lecture.

Mike dissected the album track by track for his audience.

Here are some of the highlights.

Joni wrote “My Old Man” about Graham Nash from Crosby, Stills, Nash and Young. It marks one of her first uses of piano and highlights Joni’s uses of ragtime rhythms and syncopation. The chords of the piano harmonically match the lyrics adding to the sense of the song being in a place of loneliness and uncertainty.

“Little Green” is a heartbreaking song about Joni’s daughter, Kilauren Gibb (originally named Kelly Green), who Joni gave up for adoption in 1965. It is one of the first acknowledgements of her daughter, and it speaks about the emptiness Joni is experiencing without her. Joni uses alternate tuning in the song, something that in later years would become an elemental aspect of her music. According to the late Leonard Cohen, Joni’s ability to use a series of alternate tunings on guitar is part of what makes her a musical genius.

Joni wrote “Carey” in the Greek hippie commune on Matala, Crete, where she lived for a time in a cave with the song’s namesake. It captures feelings of realization, discovery, travel and escapism. This track also features a rare overdub of Joni harmonizing with herself.

The title track of Blue is a melancholic tune that is supposed to make the listener feel unsettled and pose the question, “Now what happens?”  According to Mike, it refers to the heroin addiction that James Taylor, one of Joni’s close friends, was battling at the time. The final track on the first side of the vinyl record is created using chords of inquiry with changes between 3/4 and 4/4 time, leading to a sense of discomfort, which after this album, became an integral component of Joni’s style.

This track was written about Joni’s relationship with actor James Taylor. The lyrics have been highly studied, so Mike focused on the production – notably the rare employment of studio functions to achieve a cheap earphone affect for a part of the vocals.

4 amazing shows at the Rogue Folk ...