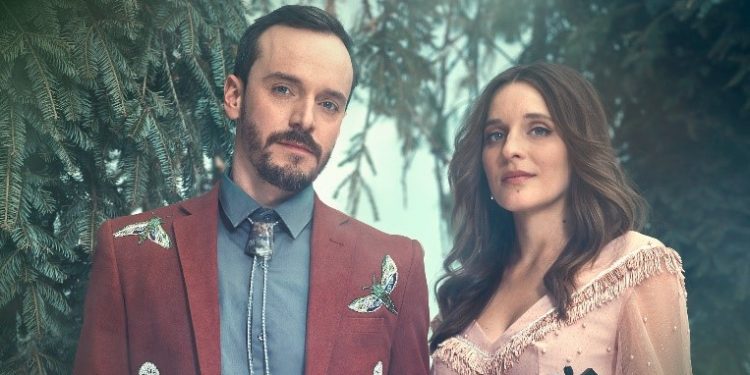 Rolling hills, whispering forests, rushing rivers and the kaleidoscope of sounds of nature’s inhabitants are a natural symphony that Mother Nature conducts for our great pleasure. The music that evokes all of these soul-stirring environments is where Francophone folk, country and bluegrass duo Veranda has staked its sonic claim with its first full-length album, Là-Bas, and the focus single, “La Visite.”

It’s only natural that musician and actress Catherine-Audrey Lachapelle and multi-instrumentalist Léandre Joly-Pelletier would find each other in their great love for country, folk and bluegrass music and set out to bring a distinctly Appalachian vibe to Québec’s music scene and beyond. Là-Bas is the full-length expression of their quest to blend the traditional and contemporary into a modern-day mélange.

From high lonesome bluegrass to intimate folk ballads, Là-Bas is a journey through 11 tracks or “milestones” along a very interesting rural route. Sweet melodies, soulful harmonies, and fine-tuned playing à la contemporaries like Alison Krauss & Union Station, Old Crow Medicine Show and Watchhouse are all part of the creative fuel. With its combination of human themes that resonate and the diverse beauty of the natural world, the album finds its perfect blend of outside and inside wonderment.

“Questions regarding the pursuit of happiness and human loneliness are approached through the eyes of forests, mountains and rivers rather than from the simple point of view of human experience,” Catherine-Audrey said.

Perhaps being able to keep their troubadour spirits engaged during the pandemic helped her and Léandre settle into the themes of their new album. Just after releasing their first EP in French, Yodel Bleu, in 2020, the couple was able to split its time between a home-base on the edge of the Rivière-Rouge near Parc National du Mont-Tremblant and playing shows on stages around Québec, Western Canada and the Yukon.

While most of the self-penned songs on Là-bas are informed by observing nature and the human condition, the current single, “La Visite,” is, in contrast, rooted in the duo’s home province and its history.

“‘La Visite’ is a song inspired by Quebec’s traditional stories,” said Léandre. “It’s the whisper of a woman waiting for her lover, long gone to work in the northern forests.”

“Là-Bas” is filled with rollicking melodies that range from playful to poignant, and the warm, intimate feeling of jamming on the front porch with friends who just happen to be virtuoso players. The album was recorded at Montréal’s Treatment Room with engineering and mixing by Gilles Castilloux. On the recording, Catherine-Audrey plays guitar and mandolin and sings. Léandre sings and plays autoharp. Rounding out the studio band were Marc Olivier Tremblay-Drapeau on contrabass, Tommy Gauthier on violin, Guy Donis on banjo, Joe Grass on clawhammer banjo and pedal steel, Charles Guay on drums and Léa Jarry on additional background vocals.

Veranda’s core duo of Catherine-Audrey Lachapelle and Léandre Joly-Pelletier each carry some serious creative pedigrees. Catherine-Audrey is a professional actress known for her long-standing role in Radio-Canada’s hit TV series District 31. Her star has been rising throughout the series, and she was nominated in 2016 for Best Actress in a Supporting Role at the prestigious Gala Québec Cinema. Even though her acting career was on the rise, she couldn’t deny her need to make music and found her way to Léandre and Veranda. Léandre is a sought-after multi-instrumentalist working with many well-established folk, country and bluegrass artists over the past decade including Sara Dufour, Laurence Jalbert and Notre Dame-de-Grass.

Together, Veranda has a clear, enticing vision of the place where their music lives, steeped in tradition but powered by new approaches.

“Imagine a place way out in the countryside, where there is a rustic cabin in the woods in front of which Dolly Parton, Ralph Stanley and Emmylou Harris are quietly swaying and singing under the pine trees; that’s where Veranda calls home.”

Here are your 2023 Maple Blues nominees