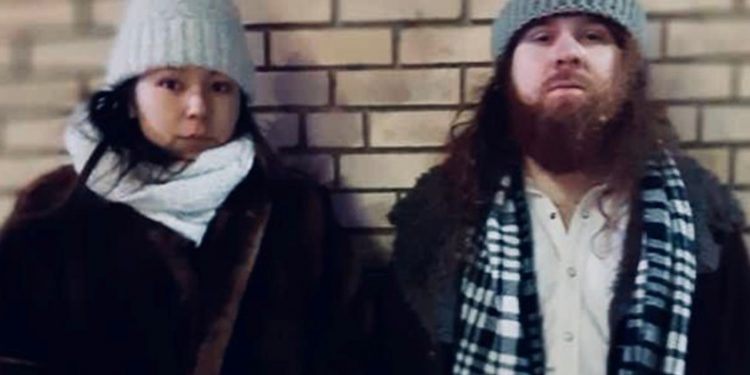 Although the Dakota Access Pipeline protests at Standing Rock may have receded from the press and faded from public memory, they continue to have an enormous impact on how many of us now think about the environment and our natural resources. With that, Thompson, MB-based folk duo Spirit Trail pays tribute to that Sioux legacy via their rocking-and-soaring new single, “Water Protectors.”

“Water Protectors” begins with a rhythmic, full-bodied acoustic guitar that soon surrenders the spotlight to the seamless interplay of Destiny Fiddler and Chas Piper’s voices. Their harmonies are like an elegant, deftly choreographed dance — with Destiny’s soprano blending and dissolving into Chas’ earnest alto, and vice versa, so that at many points, it’s impossible to determine where one ends and the other begins.

Punctuated by tambourine and wailing electric guitar, the message of “Water Protectors” is one of continuing the fight, the mission, that began at Standing Rock:

That’s because water is a precious resource that Spirit Trail refuses to take for granted.

“Water is our lifeblood, and it is our responsibility to care for and protect it before it is too late,” Destiny said. “There’s no time to take lightly the degradation and poisoning of our sacred waters. Where will we be when there’s nothing clean to drink and the medicine won’t grow?”

It’s a message the duo hopes will be heard around the globe. “The song was written to inspire the kind of revolutionary response at Standing Rock here in Canada and all over the world,” Chas said, adding that right now, the Wet’suwet’en are defending their sacred headwaters from another pipeline.

“People need to wake up and realize this fight is theirs, whether they are in a city, on the res, or wherever.”

Spirit Trail began in 2019 when Destiny Fiddler and Chas Piper met at a tree-planting camp outside Thunder Bay, ON. Destiny is Cree and a member of Mathias Colomb First Nation in Manitoba, who grew up in Thompson and Flin Flon. Chas was born in Windsor, ON, was raised by a single mom and also spent some time in foster care; Chas left home at 14 and survived the streets by busking until he made his way to Alberta at 17.

Although they have different backgrounds, their shared experiences of social injustice created an instant connection — as well as their love for poetry and music. They fell madly in love and decided to head west, embarking on a road trip across Canada, writing songs along the way. The mountains and the forests provided inspiration, fueling artistic creativity and writing.

Check out these new singles from Jeremie ...