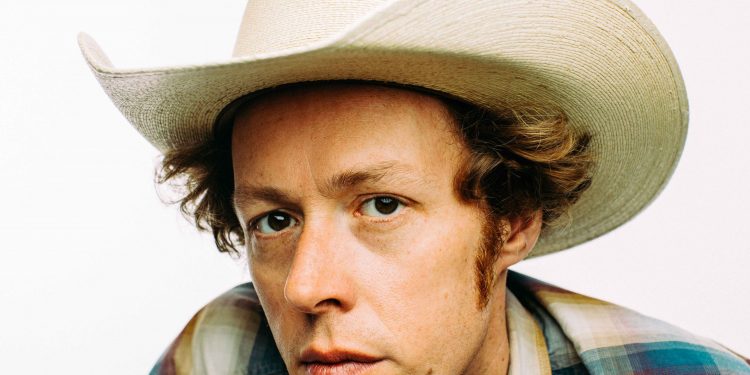 Montreal’s favourite alt-country crooner Li’l Andy is preparing to release a major multi-media project this spring, but until then, he’s tying up a few loose ends with his previous album, 2019’s All The Love Songs Lied To Us, by sharing a new video for the song “Out On The Old Highway,” directed by acclaimed Montreal photographer/videographer Nasuna Stuart-Ulin. The clip shows Andy, let’s just say, living up to his name for the first time, although he can explain the concept better himself:

“Making a music video. It’s always a lesson in how the moving image can make you look way cooler than you are. For this super fancy-ass video for ‘Out on the Old Highway,’ I look like the kind of black-suited lonesome pilgrim I try to convince people I am, an effect achieved through an amazing collaboration between director Nasuna Stuart-Ulin and dancer Bettina Szabo involving ingenious CGI effects of green-screening and laborious rotoscoping. Think of me walking on the moon. Or of the most graceful James Bond opening credit sequence you’ve ever seen (but starring me instead of Daniel Craig.)

“Nasuna and I talked about how we should do a ‘real’ video as we were breaking into the underground parking garage of Montreal’s Palais des Congrès one day to do some filming without permission. That little venture became part of a Musée d’art contemporain de Montréal exhibit, and the resulting video was great. But she came up with a really great idea for our ‘Out on the Old Highway story.”

According to Nasuna, “The video concept for ‘Out on the Old Highway’ arrived quite literally from my perspective, looking across my own body. I’ve long been fascinated with surrealist photo-collage techniques of the 1920s, and the foreshortened view, down the bridge of my nose to my toes, appeared like a mountain range in a certain light.

“For me, the most gratifying projects are a collaboration, and this was no exception. Choreographer Bettina Szabo expertly contorted herself into a myriad of bodyscapes, filmed at half-speed to give the impression of great magnitude. These served as a base for special effects aficionado Dustyn Lucas, who built a series of matching ramps for Andy to walk on while he sang. In post-production, the resulting overlap seemed to spring off my screen, and there he was — moving across a mountain range in a certain light.”

Li’l Andy’s All The Love Songs Lied To Us is available through lilandy.net, but stay tuned for the announcement of The Complete Recordings of Hezekiah Procter (1925-1930), coming soon!

Let’s all join this tribute to the ...