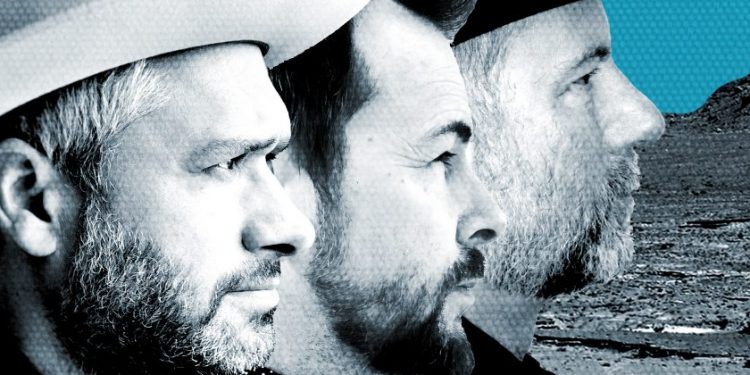 Far from the bustle of city life, under soft yellow barn lights, the veteran folk-rock trio of Stephen Pitkin, Casey Laforet and Mark Sasso reminded us of the joy live music can bring.  On a sticky summer evening in Eastern Ontario, Elliott BROOD took the stage at the Hayloft in Prince Edward County – a unique venue that holds around 200 people at the best of times, but under current conditions, was maxed-out at about 45.  As Mark noted at the time, at least that was more spectators than the Olympics.  There are some specific venues that just seem to mesh with a particular artist, and on this night, Elliott BROOD was at one with the century-old barn.

The night drew heavily from their 2020 release Keeper which explores complex personal relationships in mostly-traditional folk metaphors.  While the lyrical content of that material doesn’t necessarily translate into a dance hall environment, Elliott BROOD has mastered the fine art of setting themes of despair and destruction against foot-stompin’ backbeats and jangly, upbeat rhythms.  It was a special treat to see Friday night revelers stomping and clapping along to “Dig A Little Hole,” from the 2017 release Ghost Gardens:

I had an old man when I was a kid, mixed his own liquor in a little wooden shed

And he drank while he worked, and it was hard work drinking

It poisoned his mind, and crippled his thinking,

‘Til somethin’ went wrong and he blew up the still

So we dug a little hole on the cemetery hill

With the band on an eight-inch riser, and tables placed on the dance floor in front of the stage, it’s impossible to imagine a more intimate environment.  Casey, seated and shoeless for the entire show frequently engaged in conversations with the crowd, but kept the energy flowing skittering across his amplifier case like a water bug and interjecting the whoops and howls over Mark’s gritty vocals.

At times the band sounded like a stripped-down version of Lucero, punching out powerful acoustic-electric arrangements as on “Nothing Left,” taken from their 2014 release Work and Love.  But the trademark Elliott BROOD sound shone through with the twinning of banjo and acoustic guitar, and even switching to two ukuleles over Stephen’s drum kit, which somehow, they managed to pull off.  It’s a match made in heaven for drinkin’ and dancin’ on a Friday night, but COVID restrictions being what they are, the latter portion of that was forbidden – even to the point of event security making a couple of would-be jitterbugs sit back down before things got too out of hand.  Regardless, the music found a way, and the folks in the loft broke free, shaking and grooving without security having any recourse.

The set-list spanned 15 years’ worth of material, reaching back to 2004 for “Oh, Alberta,” and rattling the barn beams with their most recent material, including “Stay Out, Full of Wires,” and “Out Walkin’.”  It was just what the doctor ordered for a few dozen fans, starved for live music, busting out from the COVID shackles and needing to run naked through the parking area.  Let it be known on this night, we had as much fun as was allowed.

Finny McConnell (the Mahones) – The Dark ...