Why people cried when they saw Tom Leighton live (hint: they weren’t sad) 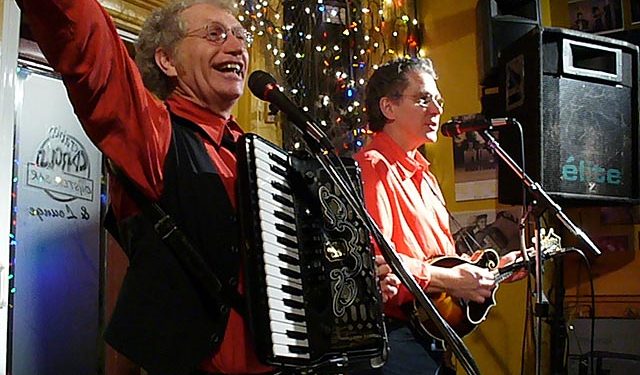 A few weeks ago, Tom Leighton had occasion to accompany singer-songwriter Marie-Lynn Hammond at a backyard concert, the first after many months of COVID-induced restrictions. What happened right away caught Tom a bit off-guard.

“When Marie-Lynn started singing, people were weeping”, he said. “Whoa, I didn’t know this song was going to affect them this way! But it was, Oh no, it wasn’t the song. We looked around the yard, and we’ve been dreaming about being in a place with other listeners and enjoying live music for such a long time. They just couldn’t contain the emotion! It just made my night to think that people cared that much about hearing live music again.”

The opening up of live gigs couldn’t come at a better time for Tom, who has just released his latest solo album, Better Leighton Than Never. The new album’s title follows in the footsteps of previous play-on-word discs Leighton Tendencies and Leighton Life and was recorded at Tom’s home studio. For a musician such as Tom, whose orchestrations and arranging skills have seen him creating works for choirs, school stage bands and symphonies, the time at home due to the pandemic had a benefit he hadn’t counted on.

“There are so many amazing players out there that play tunes, what I think sets me apart is that I’ve taken a single tune and really tried to develop it. So that’s why I’ve added string players and sometimes an oboe, different counter melodies, whistles and stuff like that. So they’re really fully orchestrated. I really paid attention. Some of those orchestrations take a lot of time to get the right voicings. But I had the time. That’s the amazing thing for me artistically with the COVID. Never in my life, actually since I’ve been a teenager, have I been forced not to do any kind of work. So what a brilliant opportunity! I was able to take hours and hours of orchestration and writing time that normal situations would never have allowed. I’m really happy with the results. Some of the orchestrations I think are the best I’ve ever done.”

Ideas for tunes can come at any time for a musician so Tom is always prepared for that occasion.

“Most of the themes were sort of written when just going for a walk or something like that. Or you’ll get up in the morning, and you’re humming something. Then it dawns on you, ‘Hey what am I humming? I don’t recognize it.’ I have a small notebook that’s got music lines in it. So most of the stuff I would start with that idea of what I was humming, write it down and leave it for a little bit. I go through the book every couple of weeks. If I’ve got stuff that I like, then I start developing it. [The new tunes] were really done in the old fashioned way of taking four bars of music that you like and then developing it.”

It’s then down to the skill of the orchestrator to assign different instruments to take turns playing this four bars and transforming it from a simple ditty into a wide ranging piece of music.

“That’s almost like how a classical writer would be able to do that,” said Tom. “That’s why [when] I looked at a lot of my pieces on this [album], they’re quite orchestral in scope. The same melody in a different colour, and all of a sudden, the vibe is completely different. Then being able to have little counter melodies come in or selected harmonies and stuff. It really helped develop the piece.”

Two tunes on Better Leighton Than Never have titles that address the conditions we’ve all been dealing with for the last year and a half, “Yearning For Normal” and “Stir Crazy.”

“’Yearning For Normal’ is one that’s full of emotion and almost jazzy in nature. It’s passion and emotion from start to finish but the fact there were no lyrics — it was a way to acknowledge what so many of us [have gone through]. Some people of course have really suffered in this pandemic time for a number of reasons and in a number of ways. Some people had it way easier than others, and I was one of them. Nevertheless that community feeling of being in this together and what a lot of people have gone through and lost and missed, just through the title I tried to acknowledge that.”

Besides working on the new album, Tom has been working on a special project for Cypress Music in British Columbia.

“I’ve been hired to do some choral arrangements of folk music,” he said. “Two of the arrangements were [songs] by Robbie Smith of the duo Naming The Twins. His partner, Kathleen Glauser, has tried to really keep his music going. The idea of putting it out for community choirs we thought was a great idea. I’m one of the orchestrators who did choral arrangements of his songs, and now they’ve been published. That’s one of the things I did through the COVID that, once again, I might not have had a chance to do [normally] just because everybody gets so busy and these things take time. I’m really pleased to have been invited to do it.”

For more on Tom Leighton go to: tomleighton.info.

Janet Cull serves up Soul from The ...

Newcomer and emerging artists: Sunday is the ...