4 acts to check out at the Calgary Folk Music Festival … like, in person … and online! 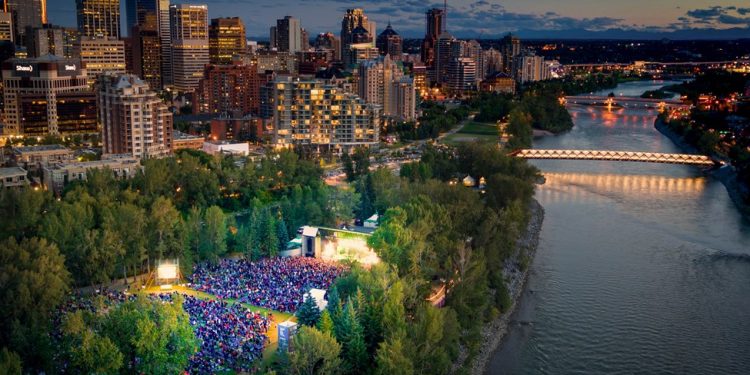 Many festivals are holding online editions again this year, opting not to take chances with unpredictable public health guidelines.

But the Calgary Folk Festival is holding an actual, in person festival – though not like previous years’ festivals, of course, during which thousands of people packed in front of stages to watch the shows.

Tonight, Calgary launches Summertime Serenades, seven nights of live music from its traditional venue at Princess Island Park, with a limited number of attendees strictly physically distanced on tarps on the grass.

Best of all, we can all watch it on YouTube.  Yes, that’s right. We can watch a real festival with a real audience live on YouTube.  And the line-up is fantastic; it includes Shad, Leaf Rapids, Tom Wilson and Iskwe, Lido Pimienta, Pharis and Jason Romero and so many more.

Here are four new discoveries that you’ll want to watch for.

A performer and humanitarian aid volunteer in her native Syria, Aya Mhana settled in Calgary in 2016 and found a new focus for her songwriting.  Where once she channeled the darkness of war and loss to help her compatriots heal from the trauma of it all, now she sings to channel her homeland and its culture for those who have never experienced it first-hand.  What hasn’t changed is her stunning, mournful voice and tasteful oud playing. If you’re a fan of Arabic singers, you must hear Aya.

Ndidi Onukwulu is not a new discovery, but she’s never really reached the heights of acclaim she so richly deserves, so perhaps it’s time to rediscover her. She combines blues, roots, rock and gospel influences with a powerful, elastic voice and some formidable interpretive skills.  Her last album, These Days, released in 2018, introduced a killer new sound marked by fuzzy guitars and distorted vocals, one that evokes other young, contemporary blues artists like Australia’s Ash Grunwald.  If you haven’t heard it, you need to check it out. I can’t wait to see her play live.

Wyatt has just one fully-produced single on Spotify, but when you hear it, you won’t be able to wait to hear more.  It’s pure sweet nostalgic folk, pop that’s catchy and charming as hell.  Wyatt is a Nêhiyaw singer-songwriter based in Moh’kinstsís Treaty 7 territory. He has made an impact on the eclectic city with songs built from soaring melodies, railroad-like finger picking and quiet, haunting vocals and lyrical phrasing. Dark, rustic tales meld folk and soulful blues to tell tales of love, loss and the journey home.

Retired Penguin Eggs editor Roddy Campbell raved to us about these guys, so you know they must be pretty amazing. The Cape Breton band came together in a most un-Cape Breton sort of way: by leaving Cape Breton and forming a rock band.  Desperate to follow in the footsteps of Halifax music scene idols like Sloan and Thrush Hermit, Joel Plaskett’s old band, they formed an act called Mardeen and started building a following in the bars of the big city.  But one night they got into a Rankin Family sing-along, and the next thing you knew, they were feeling homesick and writing Celtic songs, and now, well, they’re not Mardeen anymore.

After 30 years Graham Brown hits his ...