The Redhill Valleys get racy on new single ‘Finish Line’ 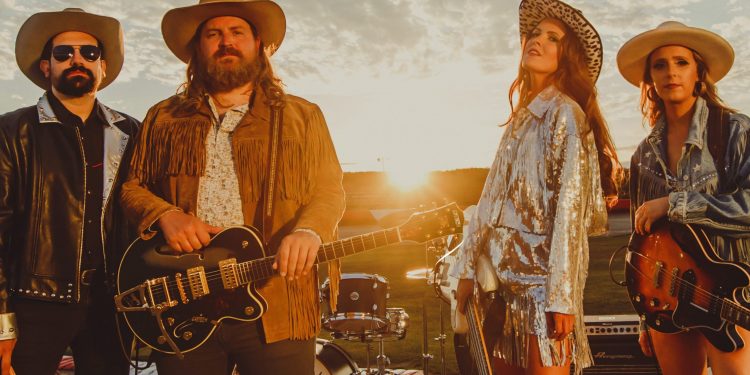 With a sound that sits comfortably at the intersection between rock and alt-country, The Redhill Valleys are poised to shake up the Americana scene when their long-awaited sophomore album is released this fall. The Hamilton-based quartet is making a strong statement now though with the single “Finish Line,” available on all digital platforms today.

“Finish Line” displays everything great about the Redhill Valleys, from the undeniable musical chemistry shared by lead guitarist/vocalist Tim Allard, bassist/vocalist Chelsea McWilliams, rhythm guitarist/vocalist Danielle Beaudin and drummer/vocalist Matt Soliveri, to their ability to craft hard-driving tunes with memorable lyrics. In the case of “Finish Line,” they update some classic rock and roll car imagery and take it a step further with the video shot at the famous Flamboro Speedway just outside Hamilton. As an extension of her powerful vocal performance, Chelsea is even seen taking a turn behind the wheel of one of the cars featured in the clip.

She explained, “The song was really born out of the lyric ‘get me to the finish line.’ It felt very rock and roll in the sense that the female perspective, when it comes to desire and sexuality, is oftentimes a very taboo topic to write about. This song is our own anthem that uplifts female sexuality in a powerful, playful and confident way. It’s really about a woman taking charge of her own desire and attraction and isn’t afraid to call the shots and demand satisfaction.”

That attitude also reflects how The Redhill Valleys have been a proudly independent group until now, earning slots at major events such as Boots and Hearts, Big Sky Music Festival, Cavendish Beach Music Festival, and Elora Riverfest, along with appearances in Nashville. It’s further led to multiple Country Music Association of Ontario award nominations and a Canadian Country Music Association Awards showcase.

No Tickets At The Door explores the ...