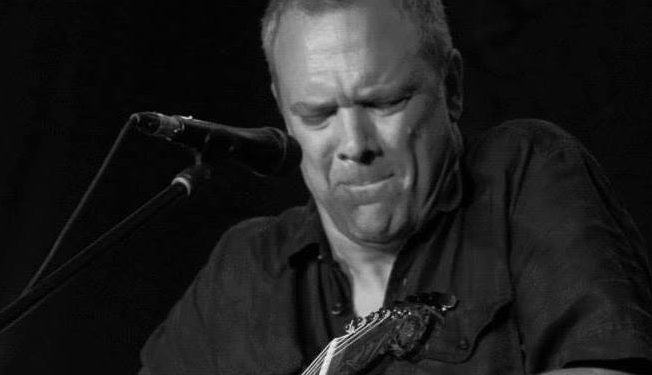 “Hard writing makes easy reading.” It’s a saying Rob Lutes became familiar with during his years working at a publishing company when he first moved to Montreal from New Brunswick.

“If you’ve worked on writing something properly, then the reader will have an easy time,” he said from his home. ” It’s the same with music. It’s like, ‘hard writing makes easy listening.’”

The proof of that credo can be found on Rob’s new album, Come Around.

Come Around features 11 of Rob’s original songs along with a cover of “In My Time Of Dying.” The songs deal with love, loss, hope and nostalgia, with one song, “Shediac Bridge,” originating from a commission from the Folk Harbour Festival in Lunenburg, NS.

“They got a songwriter from each of the Atlantic provinces to write about their home province and produced an album called, Nothing Like Home,” Rob said. “They were paying me, so it’s kind of like the dream job but there’s pressure to it because you don’t want to write something that’s not worthy of your home. ‘Shediac Bridge’ came through searching for places in the province that had emotional meaning to me. That was a place my grandmother had a cottage from around 1965/66, and she was there until 2000 when she died. We used to go there in the summer. It was the yearly ritual and competition to see who would be the first to jump off the bridge. [The song] talks about a time, a community and a place where I spent a lot of my youth.”

Family connections play a significant part in a couple of the other songs on Come Around. “Fisherman’s Rest” deals with a campground one of Rob’s brothers is fixing up near their hometown on the Kennebecasis River.

“[Jim] lived in Toronto for many years and he’s back [in New Brunswick],” Rob said. “He bought a home in the town but then he bought a camp out on Long Reach. He’s begun to rebuild this old camp and he asked me to write a song about it. I’ve been there a few times; it’s a stunning place, so I said, ‘Maybe. I’ll see.’ I didn’t want to promise it because you never know if something’s going to grab you. I was thinking of his place and about family, and the song just poured out. I wasn’t sure if it was good or not [but] I’ve actually come to really, really love it. It’s kind of an emotional tune about connection and disconnection, how a place can be a uniting thing where you can go there in your mind. That’s certainly valuable at this time in the world.”

“I had this song, and I really like the melody, but I was having trouble getting it finished, and I kind of thought it was finished,” Rob said. “Normally I test songs on an audience, but during the pandemic it wasn’t possible. I played it for [John], and I played it for my wife, and neither one of them thought it was finished. They offered me a couple of ideas about how to tweak it a little bit and turned it into something different. I ended up using their ideas so I put them on as co-writers ’cause I wouldn’t have been able to do it as well without them.”

“Knives” was a different creation for Rob and Monique.

“That was a pandemic song in the sense I was already going to record Come Around. Then the pandemic hit, and it changed the way I would record it. But I was still putting together tunes and writing furiously. I found these little lyrics for the first verse of that tune, ‘This thing is eating away at me/from the inside to further in.’ It felt very much like a pandemic thing, but I found it in a book of lyrics from years ago. I was sitting in the living room and playing with it a little bit and I said [to Monique], ‘You want to work on it with me?’ She’s written about five tunes with me, and it was just the right time. We sat there and threw ideas back and forth, and I wrote the last two verses and tweaked them a little bit afterwards. I love doing that when it works out. Monique’s not always available so that was one of those happy evening events.”

The COVID-19 pandemic has forced many artists to re-think and adapt their skills into other avenues of income generation. Since last fall, Rob has been presenting music history workshops, which take audiences back to the 1750s and lead them to the present day.

“I was hired by a group in Vaudreuil outside of Montreal and by the Red Cross to do some workshops,” he explained. I’ve been someone who likes to know where things come from and some of the background of songs, so I decided to do a history of music. What I consider the first hit song in America is, ‘The Yankee Doodle.’ That was written by a British guy mocking the colonial soldiers in the Seven Years War, and then it was re-written by an American during the Revolutionary War to kind of [return the mocking] to the British. [The workshops have] been incredibly inspiring as a writer. I’ve written a lot, kind of pushed by these different themes and techniques I’ve learned about. It’s been a great way to use the downtime.”

Given Rob’s past as a writer of books, is there the possibility all of this research might make its way into a book?

“It’s tempting, to be honest,” he said. “It’s funny. My wife and I talked about that because of recounting these stories to her. It would be an interesting idea. It’s a cost/benefit analysis really for the amount of time it would take to do it and do it well. But I am looking at different ways of spreading this stuff out in a wider kind of way to get these stories out. There are so many ways in which these things are relevant today. It’s largely through the minstrelsy (blackface minstrel shows) and these very problematic songs that have been brought forward from then to now as kids songs. They’ve been cleaned up a bit, but few people know the real background, and once you know it, it’s fascinating and it’s difficult. It’s probably a story that has been told in many ways but it’s definitely something that I’m thinking about.”

For the foreseeable future Rob is looking forward to doing a few virtual concerts until “in-person” concerts are allowed again.

“When things open up, I’ll definitely be out playing these songs because some of them haven’t been really brought to a live audience. I’m really excited to do that.”

For more information on Rob Lutes and his new album, Come Around, go to: http://www.roblutes.com.

The Redhill Valleys get racy on new ...