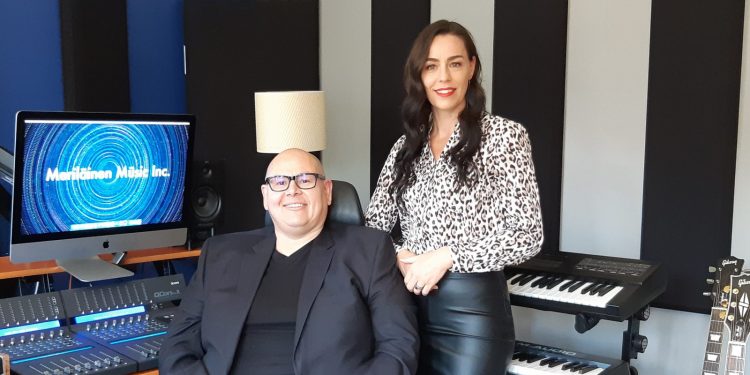 In 2019, the two launched a record label — Meriläinen Müsic Inc. — from their home studio in Toronto. Thanks to their set-up, they have been able to keep rather busy throughout the pandemic, hosting artists to record when public health guidelines allow and shooting videos for Marc’s own music.

“There’s some adjustments, of course. But overall, our schedule hasn’t really changed much,” Marc said.

That’s not to say the past year has been without disappointments. The pandemic put a pause on a project that was really just getting started, a monkey wrench in Meriläinen’s momentum.

The first wave of COVID-19 infections cancelled sessions with Winnipeg singer-songwriter JC Campbell last March, along with music conferences and live shows, where connections with artists are typically made.

Disappointed but not defeated, Laura said this time has left them eager to get back to work.

“We’re just waiting, ready to start up again,” she said. “Going out to conferences, going to see bands live. I think that’s going to help determine what we do next and what our clients need.”

Those needs might be at the heart of Meriläinen Müsic, defined not only as a record label, but as an educational space for emerging artists. Marc is an able mentor. Touring under the moniker Nadjiwan, he has more than 30 years of experience in the industry, and plenty of lessons to impart — many of which are learned outside of the studio.

“A lot of people think that recording the album is the final step in the process, when, it’s really just the first of many steps to come.”

Those include marketing the music, mapping routes toward radio play, and leveraging the final product to secure live spots.

“Even in pre-production, we start teaching these artists about how the business works,” Marc said. “It’s that old saying: you give someone a fish; they eat for a day. You teach someone to fish, they eat for a lifetime. We’re trying to teach our artists the steps of the business and how to be savvy in making the right business decisions.”

Marc and Laura make a good team, striking a fine balance both professionally and personally (they are celebrating their 25th wedding anniversary this year).

With her background in property management and bookkeeping, Laura handles administrative tasks, drafting contracts, press releases and submitting songs for royalty collection. Prior to the label’s launch, she had been involved in the music business mostly by proxy, helping Marc run the studio and other business ventures.

“He found himself kind of drowning in paperwork, and I love paperwork!” she said, as Marc laughed in the background. “So, we asked ‘why don’t we work together? I’ll do that part of the business, and you can stick with the creative part.”

That’s not to say her job is totally without creativity. She now finds herself behind the camera for Nadjiwan’s “isolation performance videos,” featuring the couple’s sons, Fox and Cole, on drums and bass. 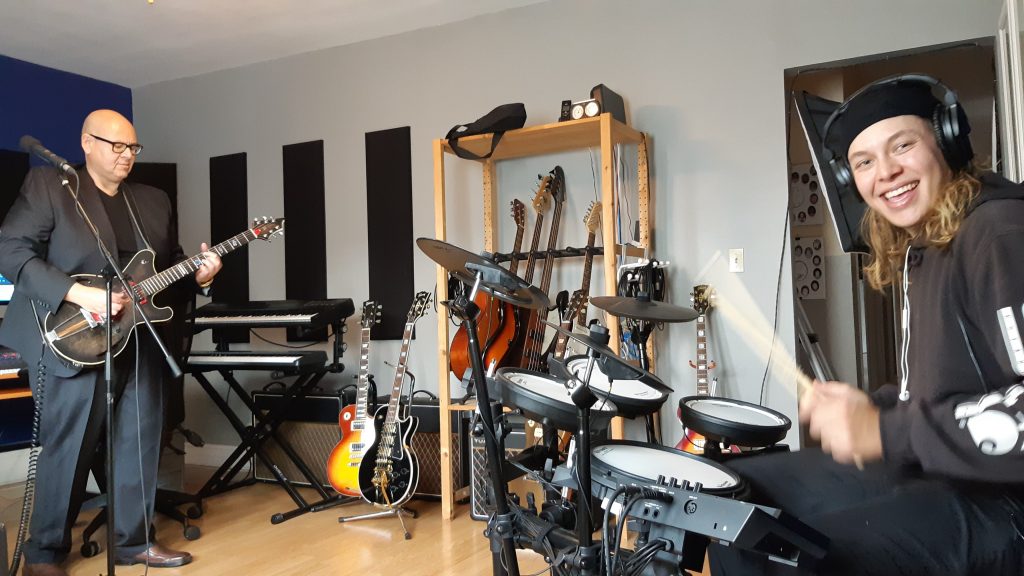 While her former career allows her to provide artists with sound financial advice, Laura’s guidance sometimes goes beyond numbers.

“I have actually helped them in their personal lives, which is part of the artist nurturing as well,” she said. “Recording and releasing an album, or any other kind of art, is very emotional. When you have things going on in your personal life that are difficult, it makes everything difficult.”

It’s a type of support that breathes warmth into the idea of a home studio.

On the creative side of things, Marc likes to break down some of the barriers between artist and label, considering the arrangement more of a partnership.

“I always try to make sure it’s a symbiotic relationship,” he said. “Even with new artists, there’s always something I can learn from them. And, hopefully, they can learn from the experience I’ve had over the years.”

Marc is the first to admit that over those years, the industry has undergone major changes, with the rise of digital streaming services shifting artists’ priorities.

“We’re in a time now where it’s a waterfall of music, with hundreds of new releases a day,” he said, explaining the difficulty of standing out in such a saturated online market. “At the end of the day, you kind of have to carve out your own unique voice.” 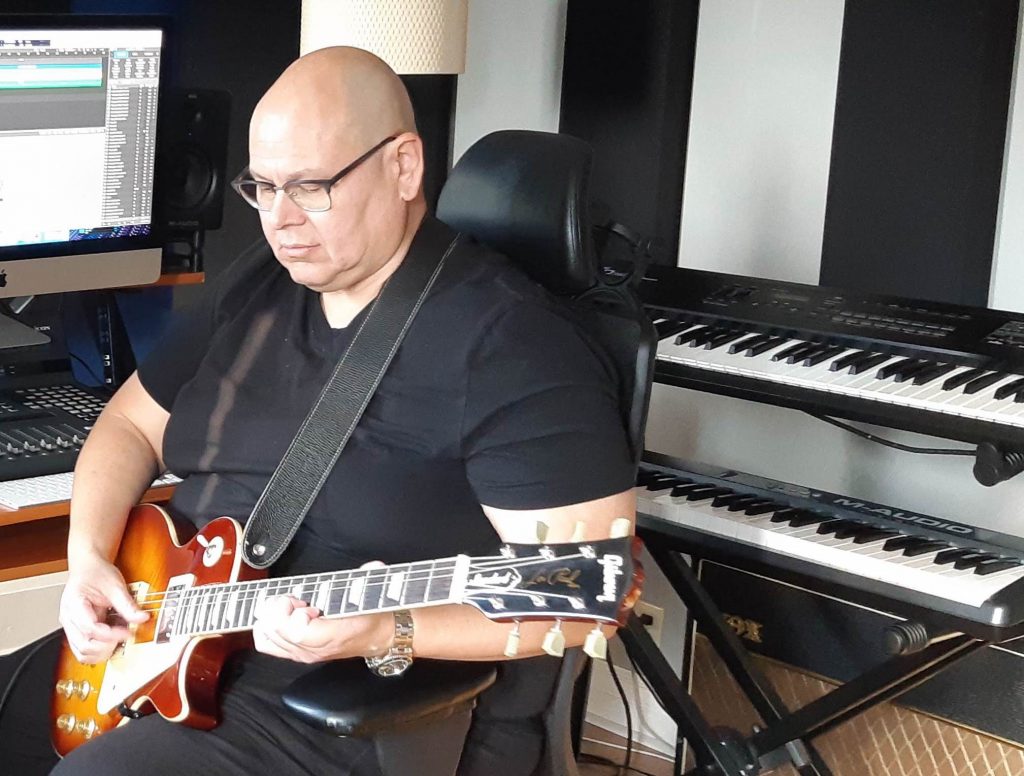 That philosophy pertains to Marc’s own sound, which draws on both his Finnish and Ojibwe heritage, folding disparate musical traditions into a distinct brand of alternative rock.

“I grew up with both cultures. As a kid, going to various powwows and round dances, listening to drum songs. Then, in the same hour, going to listen to rock ‘n’ roll,” he said. “It was a combination of these two constant musical voices in my ear that influenced how I write.”

It’s something that Marc sees in the artists who have signed with Meriläinen Müsic — many of whom are indigenous — a current running under JC Campbell’s country-blues tunes, STOiK’s dystopian EDM, and the acoustic musings of singer-songwriters like Herbie Barnes and Rosary Spence.

“Their indigenous background really goes into what they are trying to create,” he said. “Whether in rhythm or melodies or whatever it might be.”

That influence is clear in the work of the late Kelly Fraser, who famously infused dance pop with Inuk throat singing and drumming. Kelly’s second record, Sedna­­, which earned her the 2018 Juno award for Indigenous Music Album of the Year, features a number of tracks sung in Inuktitut.

Marc worked with Kelly prior to her passing in 2019, and the label is currently in talks with the singer’s family to release a posthumous record later this year.

For Marc and Laura, showcasing this work goes beyond the music.

“Indigenous culture, music, stories — it’s all synonymous,” Marc said. “I think it’s really important to get that out in the Canadian mainstream.”

He added that the creation of the Indigenous music category at the Junos and the Indigenous Music Awards are steps in the right direction, and that Meriläinen Müsic aims to do its part in bringing new voices to the stage.

“We’re the original keepers of this land, and there’s a lot of stories that have yet to be heard,” he said.