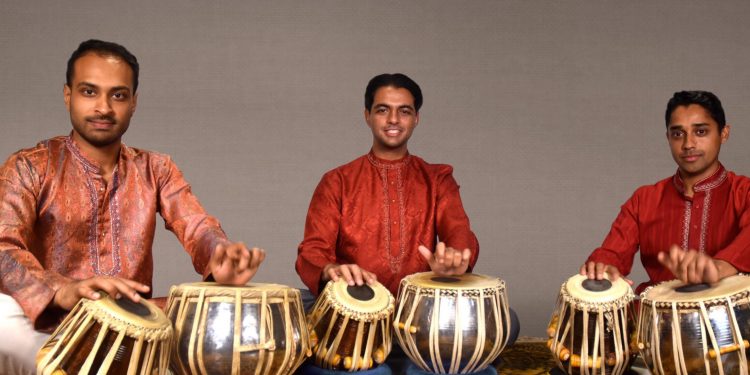 Fresh off their most recent release, Unexpected Guests, the Toronto Tabla Ensemble continue to blend musical traditions with their new video for “Maryem’s Here.” The sounds are as diverse as the images, as taiko drummers, violinists and tabla players flash across the screen, accompanied by a traditional Indian dancer.

The ensemble’s goal is simple: to create compelling music and present it with visual flair.

Believe it or not, that involves getting back to basics.

“This album is a simple one,” said Ritesh Das, the group’s founder and tabla virtuoso. “Most of the tracks are in very straightforward 4/4 grooves. On our other albums, you had tracks with different time signatures that made it really intellectual and complicated. But I wanted this one to be something that anyone can sit back and listen to.”

But simplicity doesn’t imply a sacrifice in musicianship. “Maryem’s Here” is a dazzling show of virtuosity on a variety of instruments from around the world.

While the tabla — traditional Indian hand drums — are at the root of the TTE’s signature sound, “Maryem’s Here” features Raaginder Singh Momi on the violin and Toronto ensemble Nagata Scachu on the taiko drums. Maryem Hassan Tollar — the Cairo-born singer whose vocals float atop the rhythms — brings a mastery of technique and tone to the table.

The blend of musical traditions is seamless, layering rhythms beneath Tollar’s haunting incantations, all within the confines of that 4/4 time signature.

Other tracks draw on sounds from different parts of the globe, enlisting bagpiper Craig Downie (Enter The Haggis), multi-instrumentalist George Koller, and flautist Alysha Addetia, among others.

Part of the magic is achieved by Ritesh’s own versatility.

“Over the years, I’ve done everything from jazz to rock ’n’ roll,” he said. “I don’t do traditional Indian music; what I do is take the essence of it — the songs and sounds of North Indian classical music — and I blend it with other styles.

For Ritesh, the connection between these disparate sounds is clear.

The Toronto Tabla Ensemble have released six albums and were nominated for a Juno Award for their 2000 album, Firedance. Their 2018 album, Bhumika, won an Independent Music Award, and garnered two Canadian Folk Music Award nominations. TTE also includes a youth ensemble — featured on one of the album’s tracks — and a film/video division.