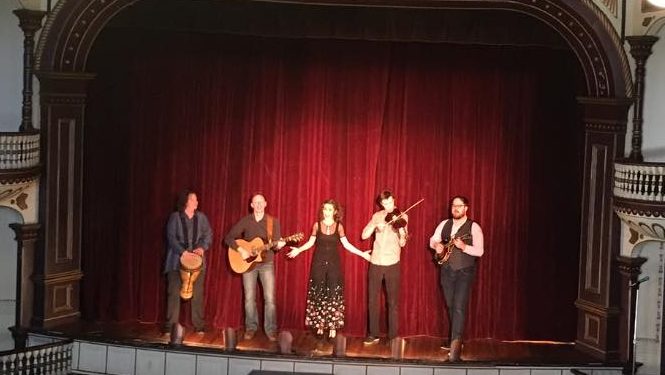 With the release of their new Christmas/winter album, the Tide Of Winter, the Irish/American/Canadian quintet Runa fulfils a plan they’ve had since they first formed 12 years ago. Goderich, ON resident Cheryl Prashker is the group’s percussionist and one of three original members.

“It’s not something we were able to put together until this year,” she said. “All the members of Runa have other projects. Shannon (Lambert-Ryan) and Fionan (de Barra) especially have a big project they do with another group always at Christmas time. We had actually started [the album] last year and snuck out a couple of pieces, but we literally started recording last year, put it aside, put out a few pieces and then thought this year would be the big year. With everything going on, it just seemed to work out. We have two newish members, and we really wanted to have them involved in a Runa CD, and we didn’t want to wait any longer! Even though we were recording apart from each other, it’s Fionan and his mixing magic [that put it together]. It’s very exciting.”

While 30-40 per cent of the album was recorded before COVID-19 restrictions forced artists to work together remotely, what had been done was still recorded in this manner because Cheryl had moved back to Canada after living in the Philadelphia area for many years.

“Some of it was done remotely, just to get the feel of what it would be like to record [that way] and also to put out a single last year,” she said.

Christmas or winter-themed albums are popular sellers year after year, but they can be fraught with stresses you won’t find with a “regular” album. In many ways every new album is compared to every previous Christmas album ever released. What may seem like a limited repertoire puts pressure on an artist to give a well-known (or well-worn) song or carol enough of a different interpretation to make it their own. But you also run the risk of straying too far from what people are comfortable in hearing.

“Shannon Lambert-Ryan does an incredible job of choosing music,” Cheryl said. “We wanted to do something a little different. Or if it was something that was a holiday standard, we wanted to put our little twist on it. A lot of the tunes have special meaning to whoever in the band [suggested it]. [With] the opening track, “Brightest and Best/Gaudete/Noel Nouvelet,” Shannon grew up singing “Brightest and Best” during the Solstice season and [it was] something she wanted to add. She actually learned it from Jean Ritchie (referred to by many as ‘The Mother of Folk’). Shannon and Fionan had been touring with Ricky Skaggs, and they did a version of that with him, so it meant a lot. They chose a French-Canadian piece (“Gaudete”) to add to it, based on my background having been born and raised in Montreal. So a lot of pieces have personal meaning to members of the band. With Fionan, his first language is Gaelic, so some of these tunes have been sort of translated into Gaelic.”

One song, “The Snows They Melt the Soonest,” is not a common seasonal song, but for Cheryl Prashker, it’s one of her favourites on the new release.

“It’s one of the most beautiful songs on the album,” she said. “I’m very excited about it. We were all taken by the piece and the beauty of it. It’s something not necessarily religious or a hymn having to do with the season, and we put “Wondrous Love” together with it, so the two songs played well with each other.”

Runa has been together for 12 years now despite the occasional line-up change. Perhaps part of their longevity is because all the members are involved in other projects.

“We tour a lot in January, February and March, and then the entire summer and into early fall. We do like to prioritize this band, but we started out as back-up members of other groups. That’s how we met originally. Shannon and Fionan met at the Philadelphia Folk Festival. They struck up conversations and a love interest, and now they’re married with a two-year-old! They included me on a show in Philadelphia, and it sort of grew from there. None of us had been ‘front men’ of any group, and that includes all the people we’ve had in the band since then.”

Besides original members Shannon (on vocals), Fionan (on guitar) and Cheryl (on percussion), Runa includes fiddler Jake James from New York City and Caleb Edwards from Nashville on mandolin.

“We were sort of all back-up players with other jobs,” said Cheryl, “whether it be teaching or other solo or group careers. But primarily [Runa] is the focus for the year.”

The usual way for the members of Runa to plan material for an album is for all to get together and work out each player’s parts. Since they couldn’t do that for The Tide of Winter, they resorted to another method. trust.

“The theme for this band has always been, ‘here’s the piece, let’s jam it out together, and whatever you bring to the table, that’s what’s gonna end up being on the final cut.’ We weren’t able to jam things out this time, so we trusted. Which was a little weird! Especially for Fionan, who is the engineer and producer of the band. He sent out the music and said, ‘I’d like to hear what you hear on it and send it back to me.’ That’s how we did this [album]. That means everyone put in an equal amount. It was ‘give us all you got,’ and we are all very excited about the project. Throughout the process of putting the album together Fionan would send everyone mixes so everybody was happy with the tracks.”

You can hear the finished product by going to Runa’s website: runamusic.com.