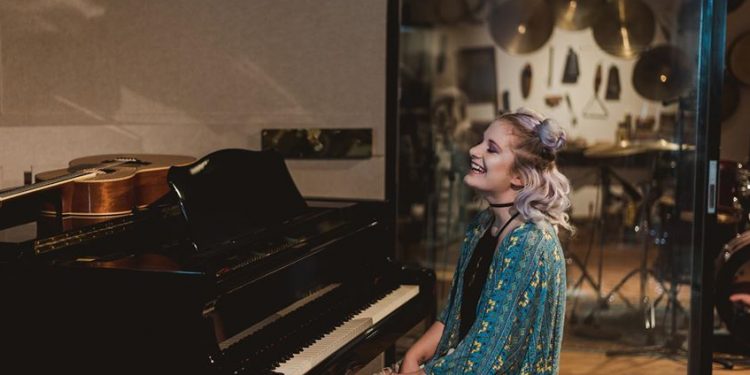 We’ve featured Missy Bauman’s song “Two Sisters” a couple of times here on Roots Music Canada, starting when she won a 2018 Folk Music Ontario Songs from the Heart Award for it. It’s a vulnerable, powerful, and political song that frankly, blew me away.  So when Missy sent us a whole bunch of tour dates ahead of her new album, Sweet, which is due April 17, I jumped at the opportunity to learn more about her and her music.  Her tour dates are all listed below.  Here is the conversation we had by email.

RMC: Two Sisters” is a very powerful, very moving, and very personal song.  How is the rest of the forthcoming album similar or different from it?

Missy: “Two Sisters” was easily the most vulnerable and open song [I’d] ever written when I wrote it. It felt like water pouring out of me. I never intended to share it with anyone, but after I did, it’s like the floodgates were open. Writing became different. I can write about anything now. There are a couple of dark tracks that cut into me like “Two Sisters” did on the album, because I’m not afraid to dig into that personal side of me anymore. And there are some more positive and hopeful tunes that come from that same place. I’m not afraid. There is so much strength and power and light in that.

Listen to this year’s Songs from the Heart award winners!

RMC: How would you say the coming album reflects your evolution since Don’t Fear the Dark?

Missy: I was having a lot of anxiety about growing up when Don’t Fear the Dark was written. It took me a few years after college to find my footing as an adult, and [I] was unclear on what sorts of things I should carry from adolescence to the rest of my life. I struggled with manic depression and would often take these long emotional hiatuses from music trying to understand what I was feeling. I think they were good songs, but they came from such a place of frustration and exasperation. The dark songs were dark, but even the light songs were, too. Whereas I think Sweet has arguably darker subject matter, but with more strength, more self-assuredness. I didn’t know who I was or where I was going writing my first album. I know that now. I’ve arrived.

RMC: You recently started referring to your sound as “dreamy drug folk.”  Where does that label come from? (If I can be somewhat humorous for a second, some people might wonder if it means you’re on drugs or if they’re supposed to be when they listen.)

Missy: I came up with the “elevator pitch” a few years back before Folk Music Ontario. It came from a writing exercise where I purged pages of word association, of what comes to mind when I think of my music as a whole. It’s kind of funny because I’m not really into drugs at all, and I don’t think of it as a requirement to enjoy my music. If I could use the whole mind map to describe my music in three words, it would sound a little something like this: Songs drenched in reverb; songs soaked in melancholy; songs to drive to; songs to get high to; songs to kiss to when you’re falling asleep. Songs to listen to when you’re biking, and your hands are chilly. Songs that inspire you to grab your boyfriend’s waist while he’s doing dishes and slow dance in the kitchen. Songs to cry to, maybe songs to, um, die to? Songs that light the candles, the ones that make you think about someone you used to know many many moons ago on a night not unlike tonight, tuning into something and discovering something new – when really I just mean a cute way of saying “alternative folk.” I made a playlist of songs that help define the term a little bit  – you can listen here.

RMC: Tell me a bit about your background.  How did you get into music? Who or what inspired you early on?  How did you cultivate your sound?

Missy: I remember when I was about seven or eight, my dad and I were listening to my favourite album (Billy Talent II) on the way home. He asked me why I liked the song, and I shrugged and said, “I don’t know. I just like it.” I couldn’t think of any particular reasons at the time, but I was inspired to think about music critically. I think that was when I became a musician. A few years later, my dad bought me my first guitar, and I’ve been in love with creating music ever since.

Professionally, I had a small handful of people who really believed in me and pushed me to pursue a career. I had hundreds of finished songs by the time they found me – for no other reason than just for the joy of writing and singing and playing. It happened fast. I played my first festival when I was 17 and decided to study independent music production at Seneca after high school later that year. That college program is where I found my sound. It was a small class of about 20 kids, and we were all intensely competitive and very very close. I was writing at least five songs a week, booking shows in the city, writing grants and drafting up marketing plans. It was an intense pressure cooker year for music, and it helped me figure out who I was going to be as a writer. Not a lot of people stay in music long term, but all of my friends from that year are still in that indie music grind. It was such a transformative year that I am so incredibly grateful for.

RMC: What can people expect from your upcoming live shows?