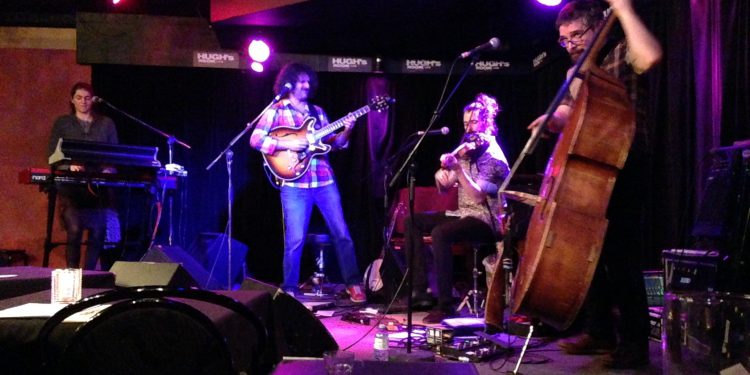 On a chilly Sunday afternoon this past November, about 50 of us met warmly at Hugh’s Room Live, our iconic listening room in Toronto, to hear the new board talk about the progress they have made in the room’s re-birth. There was a lot of really good news, but still, there are constant financial worries. The future of Hugh’s Room Live is not yet assured.

It was January of 2017 when the club closed its doors after 15 years of providing possibly the best intimate club space to listen to music in Canada. If you were a musician, it was well known as being the place you wanted to play in Toronto. Audiences could go and enjoy a lovely meal prior to the show and then hear the music. Folk music, jazz, blues, singer-songwriters and more were all at home at Hugh’s Room. After the original owner, Richard Carson, was forced to close the club, there was an outpouring of collective grief from the music community, and then, due to the amazing efforts of the first not-for-profit board, the club emerged in April 2017 from the ashes of what was, and re-opened as Hugh’s Room Live.

Today, there is a very capable seven-member board of directors taking the club into the future. It is nearly two years since the original club closed. During its hiatus, $150,000 was raised to enable the new not-for-profit to re-open. Those funds enabled a new lease on the building, staff to be re-hired and plans for future concerts to be made.

Today, Hugh’s Room Live has a new chef, Adrian Watson, who has developed a new menu based on his ideas for fine dining in this unique venue. Adrian spoke about having to “destroy the old menu,” replacing it with new and fabulous sharing plates as well as whole meal menus. He handpicked his staff, and he concentrates on providing food based on seasonal Ontario produce together with sustainably sourced meat, fish and cheese. Adrian is always taking the feedback provided by patrons, streamlining processes in the tiny kitchen and minimizing kitchen waste, to provide the best tasting experiences and value for money for the club and its audiences.

Michael Occhipinti has been the music programmer for the club for the past year. As an accomplished musician himself, he understands the business well and is seeking to maximize the use of the club’s space. There should be no dark nights, he said, and there should be a huge diversity in the music to bring in different audiences. The strength of the room is listening, he added. This is not a room where people talk over the music; it is one where people come to truly listen to the experience the musicians are providing for us.

In the new year, Michael is proud to be partnering with new presenters. There will be Guitar Week in June, Drum Week in March, and Global Toronto will present there in May. Jazz, blues, world music and comedy will also make their appearances. Michael is balancing old and new acts with the goal of continuing to build a thriving club.

David de Launay is the most recent member of the HRL board, and he spoke at the meeting about the financial situation of the club, which is now a registered charity and able to issue tax receipts for donations.

David said that unfortunately, the club sales do not yet meet its obligations. On each night the club is open, it needs a minimum of 120 audience members in order to break even, and they need to present 22 to 25 shows per month.  Greater audience numbers are definitely needed. But there are very good trends happening. Deficits are going down, and the club is actively seeking memberships, donations, grants and sponsorships.

There are many ideas to increase the revenue for the club. Live at Hugh’s CDs perhaps? Opening for lunch on weekdays? Extra late night shows?

One cool initiative I like very much is the idea of Join Up tables for those who would like to meet new friends while they enjoy the music. It’s especially a great idea to encourage single people to come alone.

David noted that Hugh’s Room Live is a legacy club, much like the El Mocambo, in that legendary performances have occurred there, but he stated that these days, all such venues are facing extreme pressure. Rents keep on increasing, and owners often want to sell the properties for development in this mega city where condominiums rule. It is a constant worry for clubs that lease their space. It is far, far preferable to own the building, but these days, that requires huge fundraising or a generous donor with deep pockets. Without being able to own their own building, HRL will struggle with being inaccessible to patrons and promoters with disabilities as well as making long needed renovations to the building.

Hugh’s Room Live staff often hear musicians say that it’s their favourite room to play in Canada. Such is the cooperative nature of the partnership between management and artists. There is a huge commitment to the carefully curated quality of the music, and audience members are treated as valued guests. There’s also the amazing 3D sound from legendary sound tech Colin Puffer; it’s better than the most expensive CD player you could buy for your home.

No wonder people come to Hugh’s to actually listen to music.

Please consider becoming a member of Hugh’s Room Live and donate to help ensure its survival.

Melanie Peterson’s new single is for everyone ...