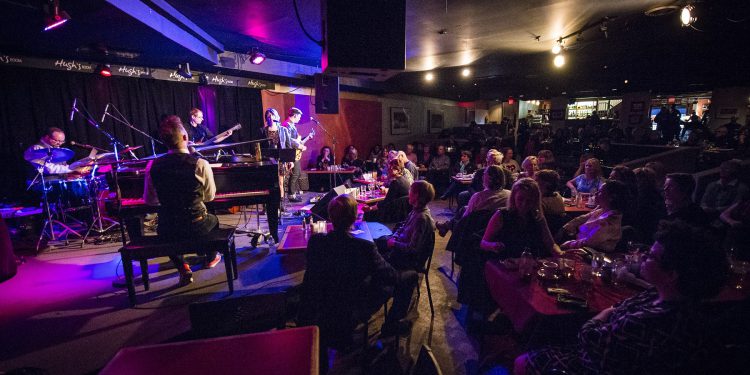 Hugh's Room, now Hugh's Room Live, has been a destination for folk fans for years. Photo by Matt Forsythe.

It was an earthquake that first rocked Toronto, and then the shockwaves rapidly expanded outwards across Canada. The legendary Hugh’s Room had closed, apparently without warning, in early January of 2017. The media was on the story in a flash; it embodied the peril live music venues were in all across the country, and it wasn’t just the folk music community that was upset. The story hit home just about everywhere and in every segment of the music industry – fans, performers, and the people who make live music happen.

Some said this was the best live music venue in Canada, and possibly beyond. A room in the west end of Toronto, with some 180 tables for dinner prior to the show, great sight lines, and fabulous acoustics. No less than Alan Doyle and Corb Lund have said publicly that Hugh’s Room has the best sound of anywhere on their tours, and yet the room had abruptly closed.

But out of the chaos, saviors emerged, people who were devoted music fans, committed promoters, musicians, and more—people who were determined that this lovely listening room would rise again, a phoenix from the ashes of what was … re-born, with brighter plumage and new, perhaps wiser, eyes.

On Apr. 28, 2018, there will be a celebration of the first anniversary of the rebirth, and we are all invited. The celebration is hugely deserved for the people who have been so instrumental in bringing the venue back: Brian Iler, Grit and Judith Laskin, Brian Litvin, Howard Gladstone, Rob Young, Barbara Jesson, Jennifer Collins, Derek Andrews and Jane Harbury, to name just a few. These are people with energy and passion, willing to give up their own time and get their hands dirty if necessary, to make this new organization happen. But they will tell you they couldn’t have done it at all without the contributions of hundreds of generous donors who supplied the funds needed for the re-start, or without the supporters who regularly buy tickets to the shows.

How Hugh’s Room came back

The current Hugh’s Room Live, a non-profit entity, is the direct result of thousands of hours of commitment and relentless labour by the members of what started as a working group and is today the board.

The rebirth was spearheaded by lawyer Brian Iler, a huge music fan, who had begun to notice the struggles of the club in late 2016. After the collapse, he contacted legendary Toronto luthier and musician Grit Laskin, and the ball began to roll. Volunteers with badly needed skills offered their services, and the new organization began to be formed.

The process was not without serious complications. During leasing negotiations, the previous owner sold the building, creating a major roadblock that was eventually overcome when the new owner proved receptive to the group’s proposal. There were difficulties in obtaining access to records, the club’s physical assets and the incredibly valuable mailing list. And then there were the cancelled bookings to deal with. “It was sometimes like a reality TV show,” said Grit, of the constant issues that arose. “You never knew what was going to happen next!”

One after another, the dedicated group of volunteers overcame the obstacles, and the club re-opened with a new non-profit corporate identity. The new name honours the original, which fulfilled the dream of founder Richard Carson’s brother Hugh, a devoted folkie who died too soon.

Ninety percent of the staff – kitchen crew, wait staff, and sound crew, returned to work, and the retired original manager, Anthony Ferrando, agreed to return for a few months until a new manager was hired. Jane Harbury was engaged as publicist, and Derek Andrews came on board as the music programmer.

“It was an experienced team that enabled us to ramp up quickly,” Grit said.

During the start-up phase, funds were badly needed, so an online campaign was launched.

“To our great delight and gratification,” said Grit, “over five hundred people donated more than $150,000, which made it possible to proceed with our vision of the new organization, and re-open the room.” Donations are still gratefully accepted, making the vision of a permanent home possible some day.

Since the end of Mar., 2018, Mary Stewart has assumed the mantle of club manager.  Mary, who is a singer-songwriter from Nova Scotia who just happens to have a hugely respected background in the hospitality industry, is thrilled to have been entrusted with this role. She said that the biggest challenge right now “is in spreading the word that ‘WE ARE BACK!’”  In the larger music community beyond Toronto, everyone has heard of the demise of the club, but not it’s rebirth.”

“Hugh’s Room was an iconic thing in the music community all across Canada,” Mary explained. “Musicians from the east coast would consider that you’d really made it if you had a gig there.

There is a legacy in this building that’s worth keeping,” she said, “and working here is like people coming to my home to hear music.”

Derek Andrews, the music programmer, had just finished working with the Luminato Festival and the National Arts Centre when he received “a lovely invitation” from the board. He is very excited to be “carrying on the legacy, through this stimulating and challenging work.”  Derek’s first step was to mop up and slog through the three months’ worth of cancelled shows, rescheduling where possible, while working with his new musical advisory committee. He sat with his predecessor, Holmes Hooke, for five hours, getting insight and discussing the need for a new vision, fresh ideas that would keep the new club solvent and viable for the future. “The club needs a minimum of twenty-two gigs per month,” he said, “and folk artists alone cannot sustain it.”

Hugh’s Room Live, therefore, has an updated creative vision. While folk music will always be a huge part of the programming, there needs to be changes.

“We are broadening the musical umbrella,” said Grit. “We are expanding to include many musical styles and genres: world music, jazz, blues and folk all have a place at Hugh’s Room Live.”

Derek elaborates: “the new vision also includes alternative performances: authors, poets, spoken word events. We want to strengthen our community roots, but also use our space better, perhaps with lunch or afternoon events, workshops and conferences.” Planning years in advance is essential, he said, to ensure the room remains financially viable as well as retaining its hard-earned place as the best live music room in the city.

Derek also has ideas for the traditionally slow summer season. On Apr., 28, details of the new Hugh’s Room Live Summer Nights Festival will be released, a way for Toronto’s premier listening room to tap into the huge tourism draw that the city is known for.

There are still challenges to be overcome. Access for people with disabilities is a formidable issue. The significant kitchen limitations still pose problems, and some of the square footage of the club could be better designed. But the people involved are keen to continue working on creative solutions. For starters, a new menu is in the works, a fairly easy fix that will fire up a new culinary atmosphere.

Said Mary: “We are finding the strengths in our team. Great conversations are happening. Everyone has a story, some advice and valuable knowledge. We are discovering the hidden talents of our employees, many of whom are also musicians. Some really special changes are about to happen.”

Music really is the universal language that entwines us. The people on the board of Hugh’s Room Live, together with their staff, are combining all of their key passions to make this rebirth a permanent thing.  Do yourself a favour: buy some tickets, make a donation to Hugh’s Room Live, and join the movement for a permanent home for our best listening room.

The Apr. 28 One Year Anniversary Celebration show will feature some really cool performances. Check out who’s on the list: www.hughsroomlive.com