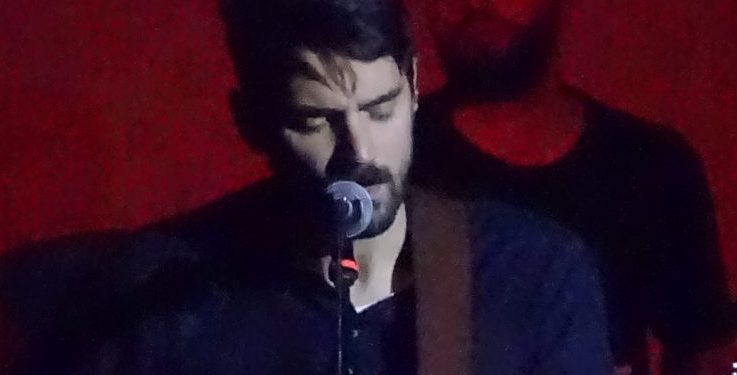 I was fortunate enough to catch Tim Baker’s sold-out show at the University of Guelph’s War Memorial Hall last Friday. The former member of Hey Rosetta! is currently touring in support of his debut solo album, Forever Overhead, released April 19 on Arts & Crafts. The album made the long list for the Polaris Music Prize earlier this year and was reportedly named in part after the late writer and professor David Foster Wallace’s short story of the same name.

The concert was co-presented by Hillside Festival, CFRU 93.3 FM and the University of Guelph and featured Montreal’s The Franklin Electric as the opening act.

I’m a fan of Hey Rosetta! and was aware that Tim was not only the lead vocalist for the group but also its principle writer. I’d been fortunate enough to catch the band on one occasion before their self-imposed hiatus. However, I didn’t truly appreciate the inherent talent behind Tim Baker’s songwriting until I saw him perform on the mainstage the Friday night of the 2018 Hillside Festival. Tim and his backing band performed an absolutely flawless set that was difficult for other artists to top that weekend. So I was thrilled to be able to catch another performance, especially so close to home and in a venue I’d yet to experience.

Despite still recovering from bronchitis, Tim did not disappoint. The set opened with “Dance,” the first single from Forever Overhead. The enthusiastic crowd was then treated to almost every track off the album, the only exception being “The Sound of the Machines.” Tim skillfully moved from piano to acoustic guitar to his twelve-string electric, supported throughout most of his performance by an incredibly tight backing band that even featured alto and tenor saxophone.

Tim also made an effort to satisfy the many Hey Rosetta! fans in the crowd when he and his band performed “Trish’s Song,” “Welcome” and “Harriet.” Sadly, he didn’t perform my personal favourite, “Red Heart” but did cap the evening off nicely with “Carry Me Home” as the encore.

Throughout his performance Tim seemed to easily captivate his Guelph audience despite the noticeable lack of stage banter. Surely he was saving his voice due to his recent illness but his music most certainly does speak for itself. He clearly remains committed to trying to express the world he sees around him despite the fact that it no longer contains his former Hey Rosetta! band mates.

Tim’s performance left me not only feeling as though I wanted to hear more but that I needed to. Whether that was his intention or not, I think it’s exactly what an artist should do with their show. As a result I won’t hesitate to go see him in concert as soon as I can.

I’d highly recommend a Tim Baker show to anyone that enjoys heartfelt lyrics and well-crafted songs all performed by a stellar band featuring beautiful vocals. Surely that’s almost all of us!