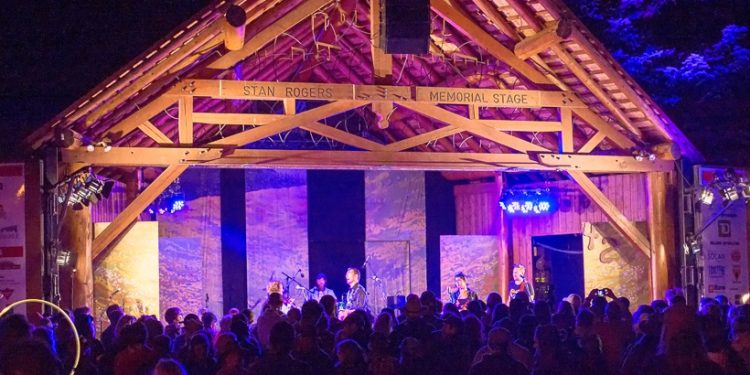 It’s all in the rearview mirror as I head back to Calgary. The 42nd Annual Canmore Folk Festival was another smashing success.

As always the weather played a major role, and this year, the sultry temps with a modest breeze made for a series of lazy sunny afternoons. There were many spectacular sessions and mainstage events that held everyone’s attention from set to set – with returning heroes like Connie Kaldor, Irish Mythen, Harry Manx, Martin Sexton, and Michael Bernard Fitzgerald(MBS) all owning their return to this great place and each noting the return invitation.

It should be noted that there was again so much to take in that I am only scratching the surface here in describing the performances and feel of what was another matchless festival.

Friday night launched The Bow Valley Indigenous and Canmore songwriters evening curated by MBF. He formed a superb showcase of music and Indigenous dance that was held at the festival site. The two-hour free concert was easily attended by 1,500, and the second hour was broadcast live to Alberta (and the world) on CKUA. For several years (nobody can really remember when this one-off evening started), Andy Donnelly and I have hosted the star-studded broadcast. The entire province is part of this Canmore event.

It should be noted that there were a lot of banjos this weekend and each with a variety of unique styles. Willie Watson impressed as a rail-riding hobo with quirky stories that would have made Ramblin’ Jack or Utah Phillips proud. He used a very individual style of frailing and wanding the strings on the banjo. Other banjoists included Jason Romero, Ryland Moranz, Harry Manx, and even Darlingside.

At this point it is important to stop and acknowledge the entire team of volunteers (including sound, stage and environment), and the well-rehearsed audience. With several thousand people in attendance each day, they are a growing collective family. The high-fives, nods, winks and “good-d’eys” are on maximum for many at this get together.

While 4,000 kilometres and light years away from Woodstock, Canmore has all the peace and love feeling that came down some 50 years ago. There were sermons from the voices in the wilderness like Irish Mythen, a certain church pulpit from Martin Sexton, and the ministers of the blues (Harry Manx, Dione Taylor, and Steve Marriner) all looking up to the majesty of these mountains.

It is important to add that these Rockies become the moderator of cool because, as I’ve said many times, no matter what is happening, those looking around are taken by the overhanging Three Sisters’ beauty. It is both a calming and humbling experience.

Due to the dry heat of the weekend, I stayed in one place for several workshops. The Harry Manx and Oktopus ‘String Thing’ became a trance-oriented blues driven Klezmer session that was beyond a free flowing. At the core was the mutual respect of each artist for each other’s individual styles.

Willie Watson, formerly of Old Crow Medicine Show, had an impressive weekend, as there was not a single workshop that he didn’t own, contributing tall tales and storied songs. He was paired with Pharis and Jason Romero, Steve Marriner, and Leeroy Stagger. Marriner (Monkeyjunk) drove da’ harp to surreal levels with emotive perfection, and let’s also add he’s nay a bad guitarist. The Feelin’ Blue workshop excelled because Dione Taylor and Backsliderz (new album in the fall) were all part of the same rhythmic lamentations. Steve, Harry and Dione and band needed no rehearsal to bring it on home.

The wider the artistic net was cast, the more successful the sessions were. The musicians took their turns both leading and following so at no time was there anything except respect, admiration, and inspiration on the stages.

There are just three well-managed stages at Canmore (also an off-site pub stage), with the Stan Rogers stage hosting workshops during the day and becoming the mainstage for focused performances from late afternoon to closing.

In a festival full of highlights there were no minor players but special mention goes to Connie Kaldor and the whole fam-damily, including Paul Campange (Hart Rouge) and sons Aleksi and Gabriel (appearing this year as Les Barricades).

Connie was also celebrated as one of the artists on the flatbed trailer 42 years ago during this festival’s first year. She regaled all with a Stan Rogers tale and then launched into a “She-Shanty.” That’s a sea shanty for women, all. The crowd greeted this with enthusiasm and sang along on the chorus. Heart and Soul was another stellar workshop – or so I heard – with Connie, Martin Sexton and Irish Mythen. The festival is both a feast of great music sessions and a source of much regret at missing those that got away.

Alberta singer-songwriter Celeigh Cardinal shared the journey of wanting to be a rock star and having to settle for being “folk,” only to demonstrate a truly passionate style alongside Dione Taylor, an equally powerful blues vocalist. She is an artist at the beginning of her career so take note for the coming years.

Oh!!! Oh !!! How much I missed, including The Lynnes, Sam Lewis, and The East Pointers, all of which were described to me as the best of the best from the festival.

I was the Monday evening host that saw the old west return with The Wardens. The legacy left by Tex, Roy and the Sons is the basis for new songs derived from their stories of the real life mountain experience. Each member of the group was a career warden and is now retired and singing songs inspired by the back country, horse riding, search and rescue, preservationist lifestyle. Their campfire songs and stories led to the honouring of these brave pioneers of the forest, rivers, valley’s and high peaks.

While many give all at these festivals, it was Irish Mythen’s set that left nothing behind, and her exhaustion and elation in performing were rewarded with thunderous applause. We are one together when strong voices lead. Manx/Marriner formed the perfect duo and added Tim O’Brien to the string assembly. The closer was Josh Ritter, and he brought happiness, political consciousness and wonder to the stage with his Cohenesque lyrics. He’s a longtime favorite of mine, and I was truly surprised by the many who sang along with his lyrics.

I get to MC this collective happiness, and once the last note is strummed, my favorite thing to do is walk at a very slow pace into the night. It is my way of moving to the next festival in celebration of this magic behind me.

The finale is always the highlight of the festival as the cool evening is lit by a silvery moon. I welcomed a great and new arrangement of North West Passage performed by the Campagne family and then the entire cast on Four Strong Winds. This family will be back again next year. It was as fine as fine can be.