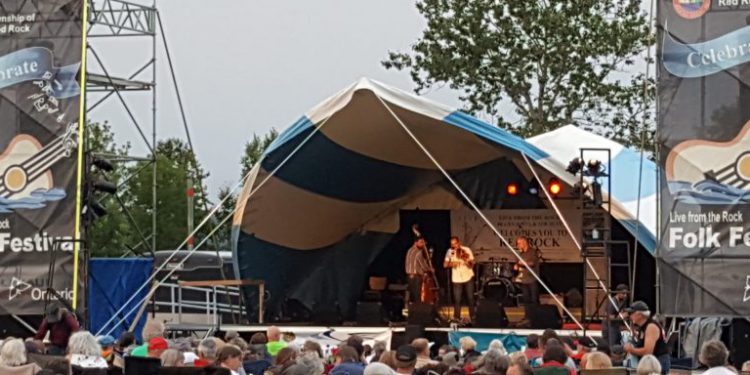 8:30 p.m. – So Long Seven is on stage as we arrive on the festival grounds and start searching for an evening meal. I’m a little disappointed that few kiosks seem to be open, and the lovely community group that made the vegan meals last year appears to be absent. I end up settling for homemade nachos, which actually far exceed my expectations.

So Long Seven sound great on this stage. On record, their music often feels airy and contemplative, but the live sound has more energy and gravitas. Their blend of banjo, tabla, guitar and violin remains as impossible to describe as ever – particularly since the musicians also blend influences from folk, jazz, classical and South Asian music, but honestly, it feels like one of the most seamless musical fusions tabla player Ravi Naimpally has even been involved in – and that’s saying something! It really doesn’t sound like a fusion at all. The crowd at least twice rewards them with a partial standing ovation.

9:08 p.m. – The MC notes that LFTR is a single-use plastic free event. Veronica and I look down at our dinner trash and note a plastic fork in the debris. Somebody forgot to tell one of the vendors.

9:35 p.m. – Benjamin Dakota Rogers just asked if someone could grab him a glass of water. A fan from the audience walks up and hands him something resembling a mickey. Gotta love the hospitality around here. Benjamin politely refuses, explaining that the juice will fry his vocal chords, before the same fan offers up some water.

Listening to Benjamin, there are times I feel like I’m listening to a young Steve Earle. He’s got a similar edgy acoustic country roots sound and a similar vocal quality, and he writes moving songs that evoke rural Canada the way Steve’s evoke the rural American south. It’s beautiful stuff, and he deserves credit for bringing a standup bassist and electric guitarist on the road to round out his sound instead of trying, as many do, to pull off the solo singer-songwriter thing on a big stage. Bonus points too for the humble, personable stage presence. Something about his personality makes even his stories about eating spoiled gas station beef jerky on the road endearing.

10:30 p.m. – Last year, Fin de Fiesta Flameco never actually made it to the stage because a spectacular lightning storm shut the show down before they could get there. This year, they’ve made it to the stage, but their slot, second from last in a show that ends at midnight, means the temperature has dipped to around 10 degrees, and even with a wool sweater and blankets wrapped around me, I’m still cold. Flamenco is an art form associated with the heat of Seville, not the chilly nights of northwesten Ontario, so the atmosphere feels a little off, you might say. All the same, Fin de Fiesta is an undeniable force of nature marked by the powerful vocals of Alejandro Mendia and – a particularly unique feature of the band – flameno flute by Lara Wong, who also sings some passages. I’m glad to finally get to see them after we all missed out last year.

With that, it’s time to pack up and head back to Thunder Bay. I would’ve loved to have stayed to see Nadjiwan headline the mainstage, but this music until midnight thing is hard on us old folks, especially those of us who still have an hour-long commute home before hitting the sack. There’s a full day and night of music to plan for tomorrow!