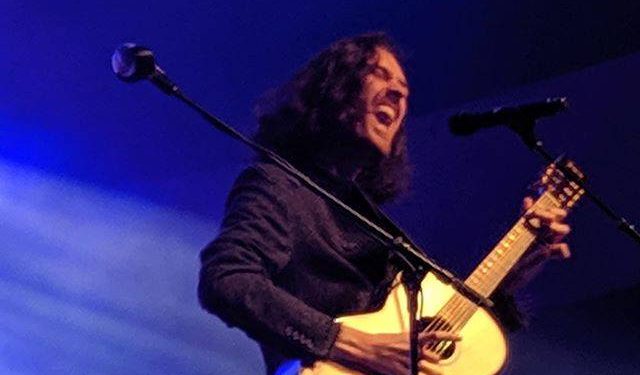 Okay, I’m privileged as all get out. In the “folk” world (whatever the f-word really means these days), I get a guest pass for the festivals I go to, and this allows me certain perks that the folk who bought a ticket might envy. The backstage bar at the Edmonton Folk Music Festival includes excellent Big Rock beer at $2.00 a glass, for example.

I don’t take this for granted, and there are times when I can’t believe my good fortune. There are also times when I figure I’ve done music business stuff — promotion, publicity, concert production, management, writing — for more than 50 years. and I deserve the backstage pass.

All of which is to say that when I climb off the shuttle bus at the festival and find my way to the green room — as I have for so many years — I feel a warm rush. I am “home,” again, and being here, year after year, is better than having birthdays.

It’s reunion time — old friends from Edmonton, folk who help run other festivals, musicians like Dove Brown of Jr. Gone Wild and Andy White, who I’ve not seen in ages. And if you were here, you’d have the same experience, and you’d relish it just as much as I do.

And that’s why I missed my pals Digging Roots altogether, and Trampled by Turtles as well (although I certainly heard the cheers from the crowd as they finished their set.)

Out on the hill — the mainstage at Edmonton is set at the bottom of a ski hill — there’s a huge audience, bigger than any other Thursday night I can remember. Obviously the lineup for the opening concert is a winner.

Whether it’s “folk”or not is another question, but St. Paul and the Broken Bones certainly earned the crowd’s attention. Lead singer Paul Janeway (a.k.a. St. Paul) looks rather like a slightly overweight bank manager — short hair, horn-rimmed glasses — but he comes onstage wearing an iridescent gold cloak, possibly in tribute to the late Solomon Burke.

Musically, this is neo-soul, with a three-man horn section and a tough rhythm section. Janeway has a powerful voice that can roar into a falsetto yowl, and he moves around the stage with a lumbering energy — certainly without the grace of Mick Jagger, but with the same intent.

He’s the total focus of the band, and he inspires an enthusiastic audience response — especially when he launches himself into the audience as he’s singing. (Backstage question: Will he be able to get back to the stage before the final song ends? Answer: No — but it doesn’t matter.)

Pause here for a moment: The Edmonton festival always has “tweeners” between the main programmed artists. Jessica Heine and Jay Gilday were both excellent solo artists and coped admirably while stage hands moved around, setting up the next band. I was a little less enthusiastic about David Jay, who shredded his way through an unbelievably speedy faux-Spanish guitar piece, and Kay & Martinez. In fishnets and feathers, Erin Kay emulated Janis Joplin while Leo Martinez kept the raucous singer on track.

And, while pausing, praise for the Cree elder who reminded us of whose land this originally was, and the young couple who amplified his message. And applause, please, for the MCs tonight — CKUA’s Andy Donnolly and Tom Coxworth.

Coxworth had the nightmare of introducing the final band of the night, the Irish group Hozier, who hit stage — a full ten minutes after Tom had asked the audience to stand and welcome them — with fog machine blasting and full-scale lighting effects.

This was powerhouse rock, and any relationship to “folk” was totally absent. Lead singer Andrew Hozier-Byrne has an appealing look, fair-enough rock songs, and a band with women backup singers. They’ve had hits too, but this must have been an odd gig for a band that’s in the middle of a North American rock tour.

Meanwhile, a lightning storm was beginning to start, and at the first drops of rain, the weaker members of the audience began to drift home — while almost all of the folk on the hill were singing along to lyrics none of us backstage know-it-alls had ever heard before.

Folk festivals, these days, ain’t what they used to be 40 years ago. Whether that’s a good thing or not is up to you to decide.