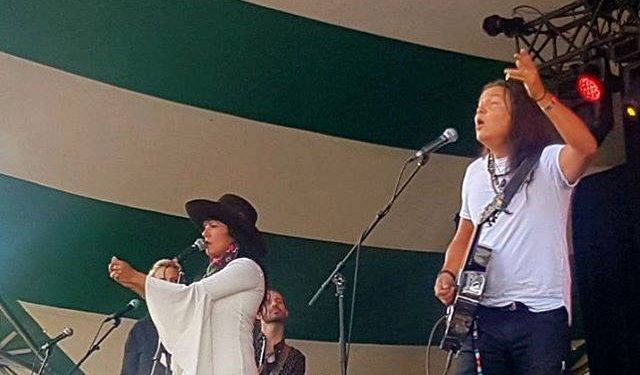 I don’t want to be too personal, but I’m lying amid the fluffy white sheets on my luxurious bed at the Westin Hotel, trying to figure out what to tell you about last night’s (Friday night’s) performance by Brandi Carlile.

First, I have to tell you that I’d heard of her in the last while, but never heard her. I’d missed her at other festivals, and at Edmonton last year when she fell in love with the audience here. And I was slightly surprised to see that she was programmed as the closer of the night’s mainstage concert.

Planning to stay for a couple of songs — it was chilly, but not raining, and my festival companion, Liz Gard, and I were bone-tired — we watched the whole set by one of the best singer-songwriters I’ve ever heard. Her performance was an object lesson for every young artist who faces an audience with original material.

First, Ms. Carlile is instantly likeable. There’s an openness to her face, especially when she smiles. Her songs have real melodies and only rarely descend into Joni-esque territory of unusual chord changes, ragged snatches of disparate melodies and vocal pyrotechnics. Flanked by two guitarists (twins, incidentally, who had celebrated their 44th birthdays the day before), every word of every song was clear and distinct. And she writes songs with hummable melodies and good stories.

Her stage banter was warm, open, pertinent and personal — she talked about her wife and her two children, and the song about her eldest daughter was touching but not sentimentalized. She did sing a Joni Mitchell song (“A Case of You”) at the piano, after telling a hilarious story about performing it in the writer’s music room for an audience that included Hozier, Chaka Kahn and Herbie Hancock.

The audience response was more than merely enthusiastic. They were certainly already in love with this artist — who is now in her 19th year as a performer — and they returned the love she gave them with a stunning, instant, overwhelming standing ovation. And now I too am an enthusiastic fan; Brandi Carlile is, indeed, the very real deal.

The festival’s second day began at 6 p.m. with a couple of workshops or concerts on each of six stages. Among the fragments Liz Gard and I heard were a couple of songs from Jason Isbell with Amanda Shires on fiddle, an uproarious song from Irish Mythen (“Jesus Be a Reasoanable Man”), and two new songs from Mary Gauthier, both co-writes with returning American soldiers and their wives.

Mary is one of the very few singers who can reduce me to a puddle of tears (another, for what it’s worth, is the sadly AWOL Amelia Curran). I can’t wait for Mary’s concert on Saturday, and her workshop with an old friend, Kevin Welch.

We also watched a superb concert by Shawn Hall and Matt Rogers (a.k.a. The Harpoonist and the Axe Murderer) with move-the-back-walls-out singer Dawn Pemberton. These guys put an incendiary, power-packed blues-based show together, and they certainly earned the standing ovation the packed audience gave them.

Nothing, absolutely nothing, beats the sheer joy of being at a folk festival. Y’really oughtta be here!