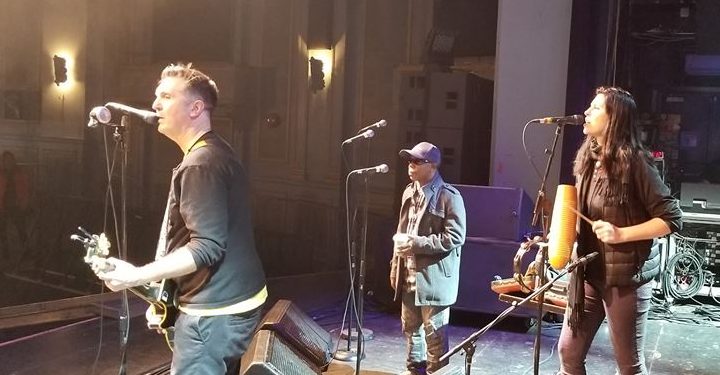 The late Toronto bass player Garry Lowe, taken by cancer earlier in the year, was honoured with a concert at the Danforth Music Hall on the last Friday night of 2018, on what would have been his 65th birthday. The personal kinship that he cultivated with his outgoing but humble personality and unique musical gifts during his lifetime was evident in the consistently inspired lineup of talent that took the stage. Set on a relatively warm evening, the show featured a mix of rock, reggae and hip hop super-novas, all backed by Gordie Johnson’s Big Sugar band. Throughout the four hour tribute, an A-list of artists too lengthy to recount (see poster) brought waves of amplified love and respect to a sold-out, full-on Friday night audience. 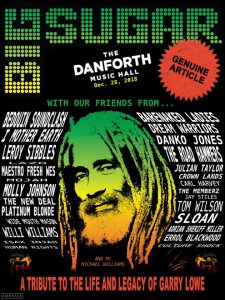 Upon arriving from Jamaica, Garry had been intrinsic to the growth of Toronto’s club reggae scene since the late seventies. Appearing first in Fabian Miranda’s Tropical Energy Experience, he was also a founding member of seminal pan-Caribbean reggae brigade Truths & Rights. As Jamaican superstars began to appear in the city, Garry became a first-call accompanist for shows in major halls, often working with innovative drummer Walter “Crash” Morgan or the brilliant Raffa Dean. Welcoming a new audience, fresh venues such as The Bamboo, The Jerk Pit and a strip of clubs on Sherbourne Avenue sprang up, creating more work and the need for more bands. Garry was often appearing in several bands a week, including Boncongonistas, Culture Shock, Mojah & Friends and Black Empire. At this point, Garry was selected to join Big Sugar as their permanent bassist, developing his style further to bridge the heartbeat of reggae with the nerve of rock.

Highlights of the night included a reunion appearance by Garry’s eighties aggregation Culture Shock, an emotional  rendition of Bob Marley’s anthem “Redemption Song,” sung by Garry’s son, Ben Lowe, and a thrilling performance at the beginning of the second set by Leroy Sibbles, one of the icons of Jamaican reggae, who made Toronto his home for many years. His song “Country Boy,” originally recorded by the Heptones, was a particular favourite of Garry`s, and it was energized in this performance by a host of musicians who had called him a friend.  And the entire audience was singing along.

Video courtesy of Friendliness, who plays bass on this clip. Videographer: Anji Rootz.