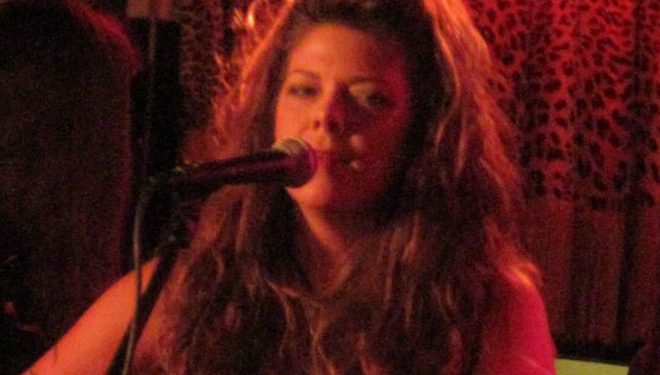 Be alert. A storm is coming in from the north, and territories from the Great Lakes on down to the Panhandle are in for an intense front of reverb followed by potentially severe aftershocks of heartbreak.  Neko Case and Lindi Ortega are being warned to evacuate the immediate area. Indeed, the torrential effects of Melanie Brulée’s devastatingly well-produced new album, Fires, Floods & Things We Leave Behind might well be felt for a number of years to come following its release this past Friday, Oct. 19.

The dozen newly-recorded original tunes that she has brought forward here are showing the salutary effects of recent time spent in Nashville, and rolling down the hard highways of nowadays America. Reflective of loss and loneliness, with just enough ecstasy left over to get to the next pit stop, Melanie’s narrative is planted deep in the climactic turbulence of the southern heartlands, following a lyrical upward voyage from lost to found.  Baring her vulnerability and perseverance to the cataclysms of passion, she invites us on a private dirt run across the tracks to her inner personal terrain.

Partial songwriting credits are assigned throughout to the remarkable members of her recording band, especially Kevin “The General” Neal, whose pedal steel playing supplies a glossy rainbow frame to almost every song on the record. Champagne James Robertson, another illustrious Toronto string champ, surges spun sugar into the spaces between the lyrics, and also contributes to the build of quite a few tunes. Besides the rhythm and writing skills of affable Adam Warner on drums and bassist Kyle Teixeira, the songs are also bolstered and burnished with artistic contributions from compadres Cindy Doire and Liz Stringer, and a few choice string arrangements from the ubiquitous Drew Jurecka provide an extra-piquant Morricone syrup. The hooks and tightly-honed wordplay consistently support the arc of the album as Brulée’s emotional search and rescue operations encounter doubt, risk and, ultimately, a satisfaction beyond her expectations.

A complete quota of styles that ranges from full blast rock ‘n’ roll to acoustic ballads fringed with Tarantino atmospherics guarantees a jubilee sampling of Melanie’s talents with this release, and those who show up for her upcoming itinerary of performances will also be treated to further francophonie dimensions of her repertoire, and to the prodigiously gregarious personality that she brings to all of her socio-musical gatherings, on stage or off. Roots Music Canada ran into her at the recent Folk Music Ontario conference and was able to corral her and her canine accomplice, Rocky, into an encounter at Radio Regent for this preview of her pathways over the next few months:

Paul: What did you get up to at Folk Music Ontario?

Melanie:  Oh man, that was super fun. It’s always nice to come back home, you know, and see all your friends playing and doing well and releasing records and being a part of that, and it’s especially nice to know a lot of my friends’ songs and kind of like secretly sing harmonies while they’re up on stage or doing their thing in a hotel room. It’s always like a reunion; we only get to see each other really at festivals and at conferences, so, yeah, it’s nice. Paul: I notice something too, that when you walk into the room it’s not boring anymore. Like people just go AH! It’s MELANIE! OKAY NOW!

Paul: So you had a bunch of copies of this record out there obviously.

Melanie: Yeah, we had some promo copies ready for media and stuff. The album actually comes out Oct. 19th.

Paul: Is it paid for? Signed sealed and delivered?

Melanie: Is it PAID for? Does credit count? (chuckles). Yeah, we had some help from Canada Council, which was great. It didn’t cover the whole thing, but we were super grateful for it, and I worked my little butt off for the rest of it. We’re getting towards the end of a pre-order campaign, so they still have time to pre-order the album. We’re at 81 per cent of the goal, and so we’re super close. … I’m hoping that people enjoy the music enough that they want to help me print the albums. Essentially that’s what’s happening.

Paul: And what’s the dealio? How do people get in on that?

Melanie: Well if you go to pledgemusic.com/melaniebrulee (and that’s spelt Brulée like the dessert) and there’s, like, t-shirts, there’s CDs, there’s vinyl, there’s hats, there’s even some experiences: if you want to come horseback riding in Prince Edward County, if you want to come and design your own essential oil blend, customized to you, with Christine Chanter and I. Yeah, there’s a bunch of cool stuff going on in there. Melanie: (chuckles) ALL the feelz!

Paul: And Rocky will be trotting along beside?

Melanie: (chuckles) Yeah! He comes everywhere with me nowadays. I just got him in February; he’s a rescue mutt from Nashville, and he always kinda looks worried because he has wrinkles on his face. I posted a photo of him and tagged you guys, so if you check out my twitter you can see Rocky’s constantly worried look. (laughs).

Paul: …as befits a bodyguard

Melanie: Yes, of course. Of course.

Paul: Kevin Costner had that look.

Paul: Will you be taking [the band you played Toronto with Friday] on the road to Montreal and Cornwall in the coming weeks?

Melanie: Yeah, I am. We are touring as a four-piece.  We’ve got Montreal on the 20 and then my hometown, Cornwall, on the 21.

Paul: Are you going to stick in Cornwall for awhile? Or go farther afield?

Melanie: You know, I’m back and forth right now. I’m all over the joint, but Toronto is still my base. I was spending a lot of time in Nashville, and now I’m back for the fall, and I’ll be spending some time with family in Cornwall, and spending some time in Ottawa and then, in November, I’m on tour in the U.S. So, we’ve got a fairly substantial east coast tour going on. We’ve got like, Boston, D.C., New York City, Philadelphia and I was thinking about maybe spending some time in Austin next year, just to explore a bit of the weird in Texas. Paul: Will you do SXSW?

Melanie: Yeah, well we hope so. I’ve been to Austin once before and I quite enjoyed it, and I’ve been spending a fair amount of time now in the west Texas desert, which is where we did the photo shoot for this album. My friend, Sarah Burton, lives out there, and it’s a really interesting and magical place. A lot of the album was inspired by that kind of feeling of going west and going further and further into the desert. We went on a road trip, actually, a bunch of friends and I, and that’s kinda where the album started. We took Route 66 from Nashville to Las Vegas…

Melanie: Yeah, it was amazing. What was really special about it was that I left my apartment in Toronto in a writer’s block, and it wasn’t even 24 hours on that trip and songs started coming to me, and so that was the beginning of the album. And then I got back home, and I started writing “Pretty Wasteland,” and that line came out, you know, about “the things we leave behind,” and it was inspired by the ghost towns in Texas…

Paul: I was wondering…

Melanie: Yeah, I was really fascinated by the fact that you can like, just up and leave a whole town behind, you know? I thought that was really interesting. And then while I was writing this song, a good friend of mine, who was struggling with addiction, called me up. I kind of have a panic every time I see his name on my phone. … I’m not sure if it’s a hospital call or not, and he was calling to tell me he was three weeks sober. So this song, “Pretty Wasteland,” took on a different turn, and then I started noticing how many people in my life are turning sober, and I think it’s such a commendable and difficult thing to do. I think these people are incredibly brave, because it takes a lot to look inside yourself and let go of a crutch. Once I started noticing that, well, you can’t “unsee,” it, you know? And mental health has always been really important to me and part of my story, with my father having taken his own life when I was young. And so this album has become a sort of ode to what I would say to my father if he was still around, and some form of encouragement and understanding for people going through and struggling with addiction, and their loved ones.

Paul: And it’s helping you, I guess, with a bit of closure on the whole…

Melanie: Absolutely. That’s kind of why I make music, I guess.  For me, two important motivations in writing music are to deal with my crap, and to connect with people. Connecting with people is really important to me, and this is totally a part of that same path. Paul: The less funerals we have to go to the better.

Melanie: Yeah, I mean, it’s a fact of life. It’s tough. It’s tough on people, especially when people go too soon, and you don’t feel like they’ve had their full circle or whatever it is, and it takes a lot to deal with that, with someone purposefully leaving you. There are a lot of feelings of anger and rejection and abandonment that go along with survivors of suicide. By that I mean family members and loved ones that are left behind. It’s a club that nobody wants to be a part of, but you realize that you are not alone, and the best way to deal with it is to talk about it. Whether you have one person that you confide in or a therapist. I believe that, you know, you have a family doctor, you should have a therapist. I spent a lot of time talking to therapists, and I still do, and I talk to people about it to just like, normalize the conversation.

It was Mental Health Awareness Day a couple of days ago, but it should be

Mental Health Awareness Day every day. Like, let’s not make anything taboo. Talk about it; it’s okay. It’s difficult for some people to get it out; luckily I don’t have a problem with talking. I talk a lot (chuckles)

Paul: …and you sing a lot too…

Melanie:  That’s the idea, you know? Swim in it. I mean, music has helped me a lot. The fact that I perform it, yes, has helped me, absolutely. But before I was a performer, as a kid, I used to just float in emotions of music, and I’ve always been drawn to the dark stuff. I’m not afraid of the dark stuff, you know?

Melanie: Yeah. And I think it’s really helped me a lot, being able to float in that emotion and FEEL that. It’s okay to feel angry. It’s okay to feel sad. I compare it with a door that’s closed and a whole bunch of strangers knocking and trying to open this door, and you are standing on the other side pushing it closed. The more you spend energy on pushing those emotions out, the more exhausting it is for you. So at the end of the day, if you just let it all come in, let it come in and sit with it, and feel it, it will go when it is ready, because now you’ve looked through it, and then you can get up and just walk right through it.