Oysterband’s founders are launching a Canadian tour next week! 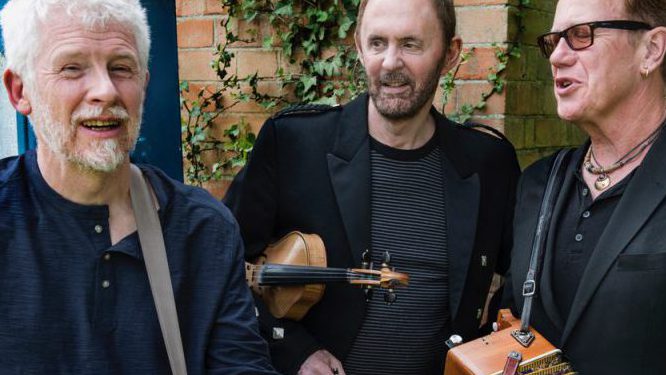 One of England’s most honoured and popular folk bands of the past 41 years is Oysterband. Mostly acoustic, sometimes trad and often rocking, the group is known for looking forward, not back, and keeping its brand of folk modern and current. The purists don’t mind them at all, and Oysterband has made a couple of highly-praised albums with British folk queen June Tabor, plus they’ve often mixed pop with politics, even doing a little tubthumping with Chumbawamba.

Oysterband even had a big hit in Canada, of sorts. Great Big Sea, fans and friends of the band, introduced their audience to the Oysters via their cover of “When I’m Up (I Can’t Get Down)”, the group’s biggest-ever hit back in 1997, getting to #6 on the Canadian singles chart. That gave the band a good career boost and a natural audience in Canada too.

The three founding members of the group (John Jones, Alan Prosser, Ian Telfer) tour in a couple of ways. Oysterband features those three along with other members on bass, drums and cello, while Oysters 3 features the originals in a stripped-down, more acoustic setting. It’s that latter format that’s doing a major Canadian tour in October and November, one that they said could never happen. In fact, the tour is called the “We Know We Said We Wouldn’t Be Touring in 2018, But There Were All These Dates We Really Wanted To Do That We Couldn’t Fit Into The Nov. 2017 40th Anniversary Tour” tour. Thanks Oysters, we appreciate that.

Bob Mersereau posed some questions to lead singer John Jones just a few days before the trio hits the colonies.

Bob: What’s the plan for these Canadian shows?

John: This is a much more intimate, theatre-style show …musically intense although acoustic and hopefully with a lot of humour and maybe the odd revelation.

Bob: What’s been the impact of Great Big Sea covering your song?

John: It is great that GBS did it, although they make it really difficult for us to play it in Canada without someone asking why we did a cover of a GBS song. We are friends with the guys, especially Alan, who we see at European festivals too, and the song reaches far more people around the world than it would have done otherwise. It has become one of those good-time, Celtic rock classics. Our manager says he always plays it when he’s getting ready to go out!  Every song has its moment.

Bob: Your sound fits well into what a lot of Canadians consider our style too: folk with energy and soul. Do you feel a kinship?

John: I am glad the question adds the word “soul” because for me as singer that is so important and often missed, over and above the folk credentials and the speed and energy. Our backgrounds, travel and personal social history influence our songs, and we get the same sense of importance of time, place and history in so many Canadian artists we have met over the years. You know that feeling, that you have been given something so rich and vital you have the responsibility and enjoyment of making it come alive.

Bob: You’ve seen folk go through several phases in your career arc, with influences from trad, rock, punk, roots, and you’ve seen its popularity ebb and flow, from being cutting edge to being considered mom and dad’s music. How have you kept afloat and vibrant through all those phases?

John: This is the most difficult question to answer without being immodest, but I guess we have always believed in what we do, in what we write and in how we perform. And we have always had supportive people at different times reminding us that what we are doing is valid and has some importance. The roots of our music are still very strong, and we still love performing, so if the audience is still there … we still have something to say.

Bob: You’ve never shied away from strong social statements, and we’re much in need of that over here these days. Anything fueling your fire currently?

John: Ian always says that it’s great being in Oysterband these days because when any weird political or social event hits us we’ve already written the song about it. Currently we are singing “All That Way For This” every night as our response to Brexit. Check out the lyrics of “My Country Too” – you can love your country and culture without denigrating others.

Bob:  What’s your favourite kind of audience at an Oysters 3 show?

John: An enthusiastic one! One that knows enough about the band but not too much!

You can see Oysters 3 in concert:

Alan Doyle and Friends Aboard the Ocean ...