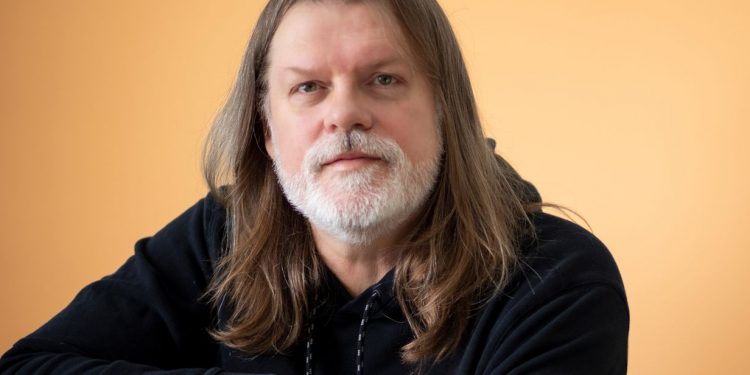 Marsh Radio, the new album by Winnipeg singer-songwriter Sam Baardman comes out over 20 years after the release of the award-winning 1999 album The Rookery, which followed his 1997 debut, Kicking The Stone Home. A lot has happened in the intervening years for Sam. He served as executive director for Manitoba Music for many years, promoting the province’s music industry and advocating for artist development. For all of his hard work Sam was named Industry Builder of the Year at the 2002 Prairie Music Awards.
What followed was over 10 years of work with the Province of Manitoba as director of the arts branch. It’s a job he could well have continued with if not for a 2020 stroke, which brought things to a halt, with the resulting re-evaluation of his priorities.

“When the stroke happened, I decided I had to take a hard look at what was important,” Sam explained at the recent Folk Music Ontario conference in London. “And it was important to get back and be a full-time artist.”

A major stumbling block though was the effect the stroke had on him.

“Thankfully it didn’t affect my language at all, but everything on the left side was pretty much affected, including my ability to play the guitar,” he said. “I completely lost the ability to even make a C chord. It was the hardest thing I’ve ever gone through. It was devastating; it was shattering. But at the same time, I was determined to get it back.”

With a fighting spirit, Sam spent every day trying to make some kind of music on the instrument and re-connect his neurological pathways. He followed the instructions of his doctor who said, “Whoa be to those who don’t have music as a therapeutic tool.”

“It was the best thing that ever happened to me that I had a guitar to play,” Sam said.

While he was making his physical recovery, something else occurred that he calls “a minor miracle.”

“Music started to come and melodies and lyrics!” he said. “Pretty soon, songs were pouring out of me in a way they hadn’t in years. That formed the basis of the new album.”

These new songs turned out to be quite different from the kind of songs Sam had previously written.

Whereas his 1999 album, The Rookery, included the song “Time,” the new album features the song, “The Trickery Of Time,” which deals with how confounding the passage of time can be.

“If there’s anything that holds the album together, it’s about getting a little older,” he said.

Looking back at his time away from doing music full-time, Sam is proud of what he was able to accomplish in an administrative capacity.

“You can hear a calling in so many different directions, and if you’re good at something…,” he said. “In particular, it was supporting musicians and supporting art. That’s a different kind of thing that can feed you. There was a lot of work to be done there, and it was really, really good soul-filling work.”

Now that Marsh Radio has been released, Sam already has another album planned. This one will feed into Sam’s concern for environmental issues.

“There’s a university-based organization called Global Water Futures,” he said. “It brings together the work of hydrologists, climate scientists, glaciologists and anyone who’s studying the broad effects of climate change on water and water systems.”

The group has a science/art collaboration project that this year includes Sam.

“I was standing on a glacier recently with Dr. John Pomeroy, one of the world’s leading hydrologists, who studies glacier melts,” Sam explained. “I said to him, ‘The surface we’re standing on now, a year ago was 25 feet higher than it is today?’ It was astonishing to me as I looked at this vast expanse. But that glacier won’t be there 50 years from now.”

Besides his skill as a singer-songwriter, Sam is also an accomplished photographer, so the plan for 2023 is to release a new book of photography based on his work with Global Water Futures and an album of ecologically-based songs.

For more on Sam Baardman and Marsh Radio, go to sambaardman.com.

The Once, The Fortunate Ones and Old ...