Moonfruits have a new single coming next Friday 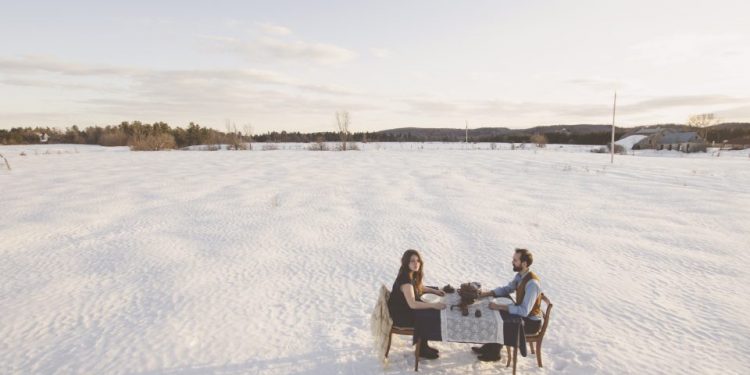 Stingray Rising Star Award-winners Moonfruits will release their new single “Atoms of the Apartment” on April 29 – the first single from their upcoming album, Salt.

Moving from a grungy ’90s electric guitar to a vibrant crescendo of strings, horns, and synths, “Atoms of the Apartment” follows the unifying thread of the unique, charming vocal interplay between Kaitlin Milroy and Alex Millaire – with a lesson in quantum physics as well.

On tour with a sleepy bandmate – Kaitlin – and a perpetually broken car radio, Alex’s mind wandered to a coffee table book borrowed from his grandparents-in-law, a never-before-opened tome from the ’70s called The Drama of the Universe. It featured billions of years of universal history dorkily divided into the acts of an opera.

“A song idea began percolating then and there, and the nerdy, upbeat love song to their apartment took root,” said Alex. “Atoms of the Apartment” is a driving, chamber-orchestra-backed tune – a kaleidoscopic ode to the quirks (and quarks) of home.

They have toured across Canada, the US and Europe, weaving together song and storytelling with intimacy and theatrical flair. They transport audiences with a tender and powerful live show that elevates the stuff of everyday life.

Salt, their sophomore album due in the fall, is a lushly orchestrated, deeply personal 12-song suite that explores what it means to live, dream and raise a family in an era of climate change and deepening socio-economic inequality. It tells the stories of their families and the kinds of communities they hope to help build.

Get your copy of the Roots Music ...