Q&A: Ben Sures talks about his latest album, The Story That Lived Here 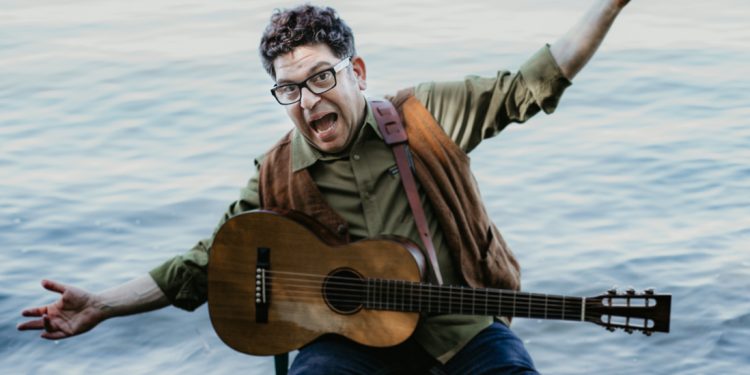 Ben Sures is a storyteller. On his tenth album, The Story That Lived Here, the Edmonton-based songwriter, guitarist and author weaves tales inspired by friends and fans. They are songs about library ladies and dive bar denizens, accidents and grieving, and at least one song about the end of the world.

Ben’s 25-year-deep catalogue is eclectic, spanning folk, country, jazz and rock’n’roll, and borrowing from blues, Sinti swing and West African guitar. But The Story That Lived Here – recorded mostly live at Tobacco and Rose Studios in Victoria, BC, with old friends Richard Moody (viola, violin, mandolin and vocals) and Scott White (upright bass), and with Rebecca Campbell adding backup vocals and percussion remotely from Toronto – is a satisfyingly cohesive and tender bluegrass-tinged album with a steady heartbeat. It’s the perfect accompaniment for Ben’s funny, honest, quirkily wise and wistful tunes.

“In case it’s the end of the world, I’m gonna have a cinnamon bun …” Ben quips to kick the record off, addressing a universal desire for comfort going hand in hand with a newfound vulnerability. In “Before We Had Sarah,” a couple with grown kids try to romantically reconnect, while “Boring People” is perhaps the most sparse, evocative performance of Ben’s career to date. Elsewhere, “Cry Like A Flood” was inspired by fellow songwriter Kat Goldman’s story of a music career interrupted, while “No One Will Remember You” takes a poke at cover band culture.

Two further songs on The Story That Lived Here pay tribute to Ben’s father, ceramic artist and Member of the Order of Canada Jack Sures, who passed away in 2018 and to whom the album is dedicated (along with Mitch Podolak, Michael Laderoute, and Thérèse Duffy).

With The Story That Lived Here, Ben Sures has made the record he always wanted to make since listening to Guy Clark’s Old Friends obsessively in the late ’80s. We were happy to chat with Ben to gain more insights about The Story That Lived Here, which is available on all digital platforms, Bandcamp, and bensures.com, where you can also find his up-to-date tour schedule.

What was the writing process like for The Story That Lived Here, and how did the recording sessions unfold?

Well, like other albums, some songs I had been working on well before 2020, and others came together in the height of the hunker down parts of what we have just been through. I didn’t really have an agenda to make an album, there was a chance it was going to be a three-song EP but magic happened in the studio. We recorded all the songs with the essentials – bass, guitar, voice – live in the same room, so that gave it energy plus the bulk of it was made with two people I really adore as people who I respect and trust. Not only that, they are close.

What do you feel makes this record stand apart from your past work?

The chemistry of the creative people involved, the fact that it was made in a natural setting and that all the songs were put down in a four-day period. Also, it was Covid; no one was distracted by three other projects and looming debts.

What are some songs on the album that are particularly meaningful to you, or have interesting stories behind them?

The songs about my father are very meaningful to me, not so much the subject as the subject’s hold on my heart, and wanting to say things just so. Sometimes songs you work on for a long time don’t have the magic of the ones that flow out, but in the case of those two, I believe a long labour led to what I wanted to achieve as a songwriter: truth, relatability,  and a window into me that isn’t weird or awkward. The last song on the album, “Maybe When I’m Older,” is very much about me even though none of the stuff in the verses happened in my life. At its core though, I think you’ll find me there. I love the story aspect of all the songs, I told or wrote them better than I’ve ever done. This is the folk record I’ve always wanted to make.

How would you describe your musical evolution to this point?

My pacing is good, I’m focused, my mind is not elsewhere. On this record I was firmly in the present in the studio, a big part of that due to the support and enthusiasm from Rich and Scott. Also, sending the tunes to Rebecca was a no-brainer because I trust her, her convictions and her musicality implicitly.

What artists (musical or non) most inspire you?