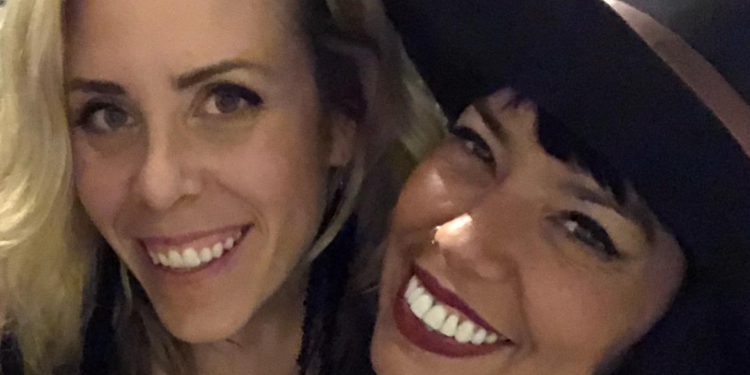 The Seven Fires prophecy is an Anishinaabe prophecy that marks phases in the life of the people here on Turtle Island. We are currently in the time of the seventh fire where we have the choice of going down two roads. One road will be black and charred, filled with suffering and death, while the other will be lush and green and will lead to the eighth and final fire.

Working hard to go down the road to the eighth fire are singer-songwriters Amanda Rheaume and Shoshona Kish. Together they created the International Indigenous Music Summit, which has quickly shown tremendous growth and awareness. Their latest collaboration is the creation of Ishkodé Records.

“The main value and sentiment of the label is, ‘Songs For The Eighth Fire,'” said Amanda. “For me, it’s music that has deep meaning, music that matters, and stories and voices that I believe everyone needs to hear, especially right now.”

Far from being a vanity label for Amanda or for Shoshona’s band Digging Roots, Ishkodé Records is looking to showcase the full spectrum of Indigenous artists.

“We’re not focusing on a particular genre or gender or whatever,” she said. “It really is undeniable music. For me our first signing, Aysanabee, was perfect. He’s amazing and it hit all of those heart levels and spirit levels. It’s going to be music that really matters to us and we believe in.”

Aysanabee is a multi-instrumentalist, producer and singer-songwriter whose music ranges from lofi-R&B to indie-pop to solo acoustic performances.

The creation of Ishkodé Records came as a direct result of the success of the International Indigenous Music Summit, with a little help from the COVID-19 pandemic.

“When we had just started doing [the summit], Shoshona came to me and said, ‘I’ve got this idea for a record label.’ We realized the alchemy of us doing projects together was pretty much perfect, [so] we went down the path of figuring out what to do. [But] we were so busy before the pandemic started, travelling and touring. Then everything came to a grinding halt. Although we’d been in discussions much before that, I think we were finally able to make this big push to launch the record label.”

Establishing a new label is quite an achievement, but unless you have a solid distribution deal, it’s very difficult to get the music out to an audience. To that end, Ishkodé has partnered with Universal Music Canada.

“It’s real exciting for us,” Amanda said. “We did meet with all of the major [labels] and had wonderful conversations with everybody. I think there’s a real excitement for what we’re doing. Ultimately we went with Universal in the end. The conversations were very powerful, and we truly believe they’re in it with us and want to make change, to learn and grow, and we want to learn and grow from them. It’s a very exciting time!”

As was mentioned, Ishkodé Records is the second project Amanda Rheaume and Shoshona Kish have worked on together. The International Indigenous Music Summit got its start back in 2017 when Shoshona was in Australia at a music festival.

“She was backstage with a whole bunch of other Indigenous artists,” said Amanda. “The story she tells is, she was having these beautiful conversations with what basically felt like ‘family.’ She called her good friend, Aengus Finnan, from Folk Alliance and said, ‘We have to do a summit!’ She wanted to bring that idea of bringing all these great voices and minds and hearts together. Everyone is working so hard out there as Indigenous artists, and she wanted to build a space where that could happen, where we could all come together. She started going down the road of putting it to work and then realized she couldn’t do it herself!”

Shoshona and Amanda have known each other since 2003, and Amanda had performed at a show called Anishinaabekwe, which Shoshona had produced for the National Arts Centre in Ottawa.

“We sort of re-connected and connected more then, and then I got this phone call out of the blue,” Amanda explained. “Someone had recommended me, and I was the first call she made, and here we are.”

The first two editions of the summit were at the Folk Alliance conferences in Montreal and New Orleans.

“It grew like six times this year,” Amanda said. “We did our first autonomous event. It was virtual. We were supposed to be on unceded Algonquin Territory at the NAC in Ottawa but up until the week before, we were trying to decide what was going to happen. There were over 600 delegates from 22 different countries that tuned in and participated. It’s the only event of its kind.”

Amanda has recently finished recording a new album that will be released on Ishkodé Records in the new year. The first example of what we can expect from it is the song, I’ve Been Gone, which she put together with Australian artist Monique Claire.

“It was part of Folk Music Canada’s export program. I applied to do it because I thought it would be a lot of fun. We’ve never met in person; we just got on Zoom and [said], ‘What do you want to do?’ She sent a song start, and it kind of just went from there. We just worked over the internet. We both recorded ourselves, something I’ve never done before. I’m really proud of what we’ve made from across a couple of oceans and continents. That was really exciting!”

Before Amanda’s full album is released in the first or second week of April, she’s planning to put out selected singles.

For more on Amanda Rheaume, go to Amandarheaume.com.