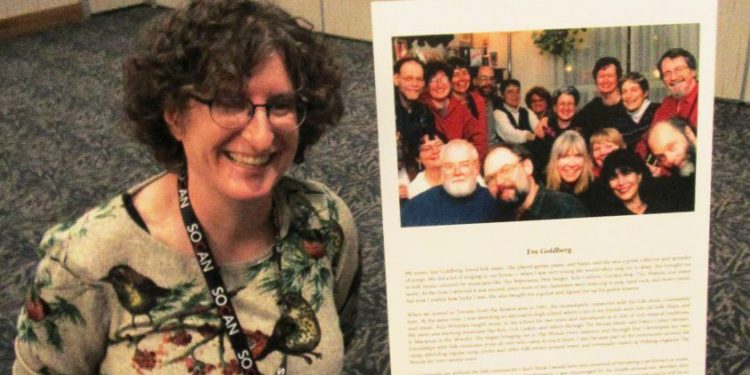 Twenty-one years ago, Eve Goldberg, part-time emerging artist and full-time administrator for Borealis Records, sat on a stage in front of several dozen delegates at the Ontario Council of Folk Festivals (OCFF) conference and interviewed the first ever winner of the council’s Estelle Klein Award:  Estelle Klein herself.

The influential former artistic director of the Mariposa Folk Festival, who died in 2004, “didn’t want to make an acceptance speech,” Eve explained. “She asked to be interviewed.”

And thus began a tradition that persists to this day.

Each year, the conference features an interview with the winner of the award, a veritable lifetime achievement award for those who have made significant contributions to folk music in Ontario.

And this year, the person being interviewed is Eve.

“It’s a huge honour,” she said of winning the award.  “It was pretty amazing to be nominated at all, especially amongst all those other people nominated this year who have really done some amazing things in the folk community.”

A long and diverse resume of accomplishments

Outside of her work as an artist, she is perhaps best known as the founding administrator of Borealis.

But she also helped organize the Woods Music and Dance Camp for more than 25 years and was a founder of Common Thread: Community Chorus of Toronto, a non-audition social justice chorus.

She was involved in the early days of ArtsCan Circle, which was built around Mike Stevens’ work with Indigenous youth in remote northern communities.

She helped start the Haliburton Winter Folk Camp. And she served on the board of the OCFF, which is now known as Folk Music Ontario, and the American Federation of Musicians Local 1000 – where she spent three years as president.

As an artist in her own right, Eve has taught at guitar and ukulele camps, community colleges, and festivals across North America

She has released three solo albums and two albums with her duo, Gathering Sparks, with Jane Lewis.

She’s a three-time finalist for the Colleen Peterson Songwriting Award and the winner of an FMO Songs from the Heart Award with Gathering Sparks for their song “Bringing in the Light.”  The duo was also nominated for a Canadian Folk Music Award.

Eve’s instrumental number “Watermelon Sorbet” was the opening theme to the national CBC show Richardson’s Roundup and her song “Streets of Burma” was used by Amnesty International Canada as part of their campaign to free one of the monks imprisoned following the Saffron Revolution in Myanmar.

“It’s weird, because I definitely feel like I’m still in the middle of something,” Eve said, when I asked her how it feels to look back on that list of accomplishments.

“I wasn’t expecting to be ‘looking back’ for quite a while yet.  But I guess I have done a lot of stuff over the years! And it’s hard for me to believe how much time has gone by.”

Despite her early connections through, she didn’t initially view performing as a viable career choice because of the financial risk she perceived in it, so she got involved in doing work that brought her in contact with folk music in other ways.

“I mixed sound at the Flying Cloud Folk Club here in Toronto,” she said. “I got involved in organizing the Woods, and eventually I worked at Borealis… and I learned all kinds of things through that.”

Eve released her debut album, Ever Brightening Day, while still at Borealis but left the company after five years when she determined it was time to devote herself full-time to her music career.

“Sometimes I think if I had had a HUGE drive to get somewhere right from the start, it might have turned out a bit differently, but I was always interested in doing these community-based things, social justice-based things, and so on.”

True to form, Eve said her goals for the future involve expanding her anti-racism work in the folk community and figuring out how to make it a more actively anti-racist environment.

“So I’m interested in working on that kind of stuff.”

How Tania Joy bonded with the producer ...

A fictional band becomes real with a ...