Jr. Gone Wild returns after 25 years with a first taste of their new album Still Got The Jacket 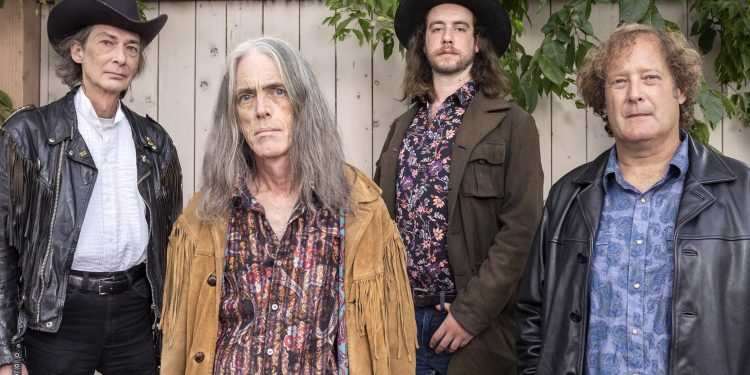 It’s been over 25 years since Jr. Gone Wild released its last album, Simple Little Wish, but now the Edmonton alt-country legends are set to return this November with Still Got The Jacket, 15 new original songs, plus a cover of the Chilliwack classic “Fly At Night” that finds founding members Mike McDonald, Steve Loree and Dave “Dove” Brown in top form. Both “Fly At Night” and “Girl In The Crowd” are being released today as a “double single” on all digital platforms.

“Girl In The Crowd” is classic Jr. Gone Wild—part Byrds-ian jangle coloured by Steve’s melodic guitar lines, with Mike’s finely crafted lyrics echoing the wit of peers such as Paul Westerberg and Jeff Tweedy. Meanwhile, “Fly At Night” reconnects the band with former producer Bill Henderson, who was more than happy to contribute some new guitar parts to one of his most beloved compositions that’s always seemed tailor made for Jr. Gone Wild’s repertoire.

The seeds of a Jr. Gone Wild revival were planted in 2013 when the members agreed to do a short run of shows. The enthusiastic response led to more shows, as well as new songs taking shape. Sadly, drummer Larry Shelast died from a heart attack in 2019, but with Mike’s nephew, Quinton Herbert, taking over the kit, the band hunkered down in Steve’s studio and recorded Still Got The Jacket during the summer of 2020.

Mike said, “When we reunited in 2013, I had no idea we’d be making another album. What was supposed to be a one-off gig turned into a revival, and the more we interacted with each other, the more we got back into the old routines, and inevitably new songs started to pop up. Steve started pressuring me to write faster, as he continued to bring songs in, and we constantly harassed Dove to bring something in, because you cannot have a Jr. Gone Wild album without a Dove song on it.”

From his perspective as the new guy, Quinton said, “Growing up, I heard a lot of stories about Jr. Gone Wild—yelling matches in the studio, near death experiences on the road, getting so sick of each other that everyone had to look down while they were playing so someone wouldn’t end up unconscious on stage. I was a little worried about stepping into the studio after hearing all of that my whole life. When we got into it, it was understood between all of us that we were there to make the best record we could. I was astounded there weren’t any major arguments, and everything went quite smoothly.”

As forerunners of the alternative country movement – back when the term had yet to be coined – there is no doubt that Jr. Gone Wild holds an important place within the Canadian music pantheon. And once fans start devouring Still Got The Jacket, the material on it may very well come to be regarded as the best work they’ve ever done.

Jr. Gone Wild’s “Girl In The Crowd” and “Fly At Night” are both available now on all digital platforms. Still Got The Jacket will be jointly released on Nov. 12 by (weewerk) and Stony Plain Records. For more info, go to jrgonewild.com.