Voices from the past: Marie Gage explores her grandfather’s passion for songwriting 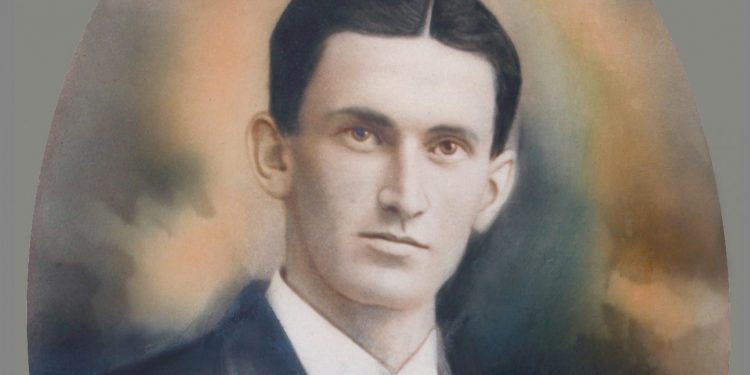 Marie Gage’s writing is inspired by real people and events in her life. Her latest project, a novel, “A Ring of Promises, was inspired by the love and immigration saga of her grandparents.

In a box, in a cupboard that is not often explored are treasures, mementos, from past generations of my family. Some things are too precious to destroy even if they rarely see the light of day. My grandfather, William Parker, was a poet and a musician. This was not his occupation but his passion and a creative outlet in life.

Sheets of music with words he wrote when he was separated from the woman to whom he was betrothed, are in that box of precious mementos. I am not a musician and thus have never been able to play the songs. I can only read the words and be touched by them. Until seeing these songs, I had no idea that a romantic soul rested inside the fun-loving man who lived next door to me until I was seven, when he passed on.

His interesting history is something I never knew anything about until I began to do family research and really pay attention to the family artifacts he left behind. Before coming to Canada, he worked as a footman to a high-placed Earl in England. The woman he fell in love with, Janet, was also in service to a wealthy family but in Scotland. They knew they would never be able to be together if they continued to work in service to others. They developed a plan to immigrate to Canada, a land they were led to believe was full of promise for young couples such as them. William would go ahead, get settled and send for Janet. The expected short separation turned into a four-year saga of romance, tragedy and adventure that inspired me to write the novel titled A Ring of Promises. But that is another story.

During their prolonged separation, letters were their only connection. William wrote poetry to express his longing for his lady love. In 1913 he signed his first contract with a music publishing company to develop original music to complement his words and publish what was then known as a song poem. Although William was a musician, he played by ear and could not write his compositions down. He needed help to do so. The song mentioned in this contract was titled “Across the Rolling Sea.” I have a copy of the contract. Unfortunately, the sheet music for this song did not survive. Fortunately, several other songs did. 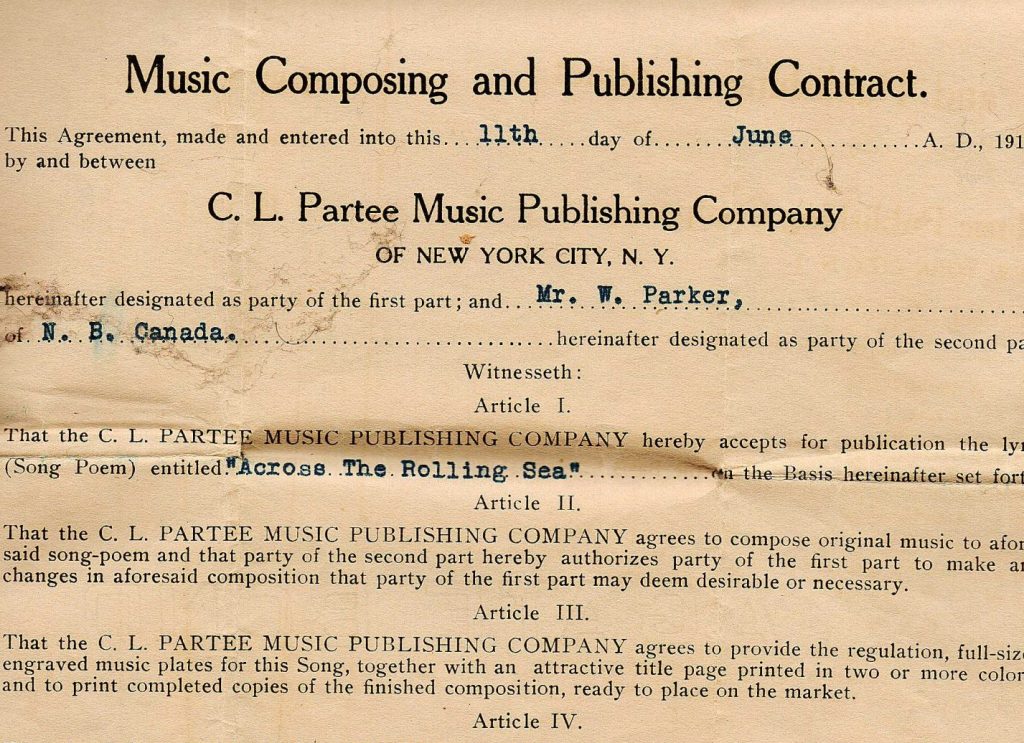 I picture my grandfather sitting at the side of the Hammond River, the river passing through the French Village, New Brunswick, where he had found work as a logger. I see him watching the water flow over the landscape as he writes this poetry. Why this scene you might ask? Well, the water flowed to the Bay of Fundy and into the Atlantic Ocean, connecting him to Janet in her home in the Highlands of Scotland. While I’ve never seen the words to the song “Across the Rolling Sea,” I imagine they had to do with the water connection between them. Other poems of his allude to this.

As I researched the companies he contracted with to publish his music, I was faced with the question of whether he had been duped by the song poem ruse that originated in his day and is still alive in one form or another today. Companies would run poetry contests with the prize being the publication of the song. The submitters would then be contacted by letter mail and led to believe they had won. All they had to do was pay a fee to have the music composed and it would be published. I have no proof that my grandfather made any submissions, but one of the companies his work was published by was later known for this ruse and prosecuted. So rampant were the complaints about the ruse that newspapers started to refuse advertisements requesting submission of song poems.

I read some of the notes about the trial of this company. Apparently, submitters were called upon to read their poems in court as proof that the company would publish just about anything. The reaction of the attendees in the courtroom was often that of laughter, causing great embarrassment.

Reading my grandfather’s poems, I do not believe he was in the category of incompetent poet. He may even have worked on a legitimate basis with this company to self-publish his poems as songs. The composer he worked with appears to have a relatively good reputation with at least one number one hit to his name. I do not believe such a composer would take on an incompetent poet. 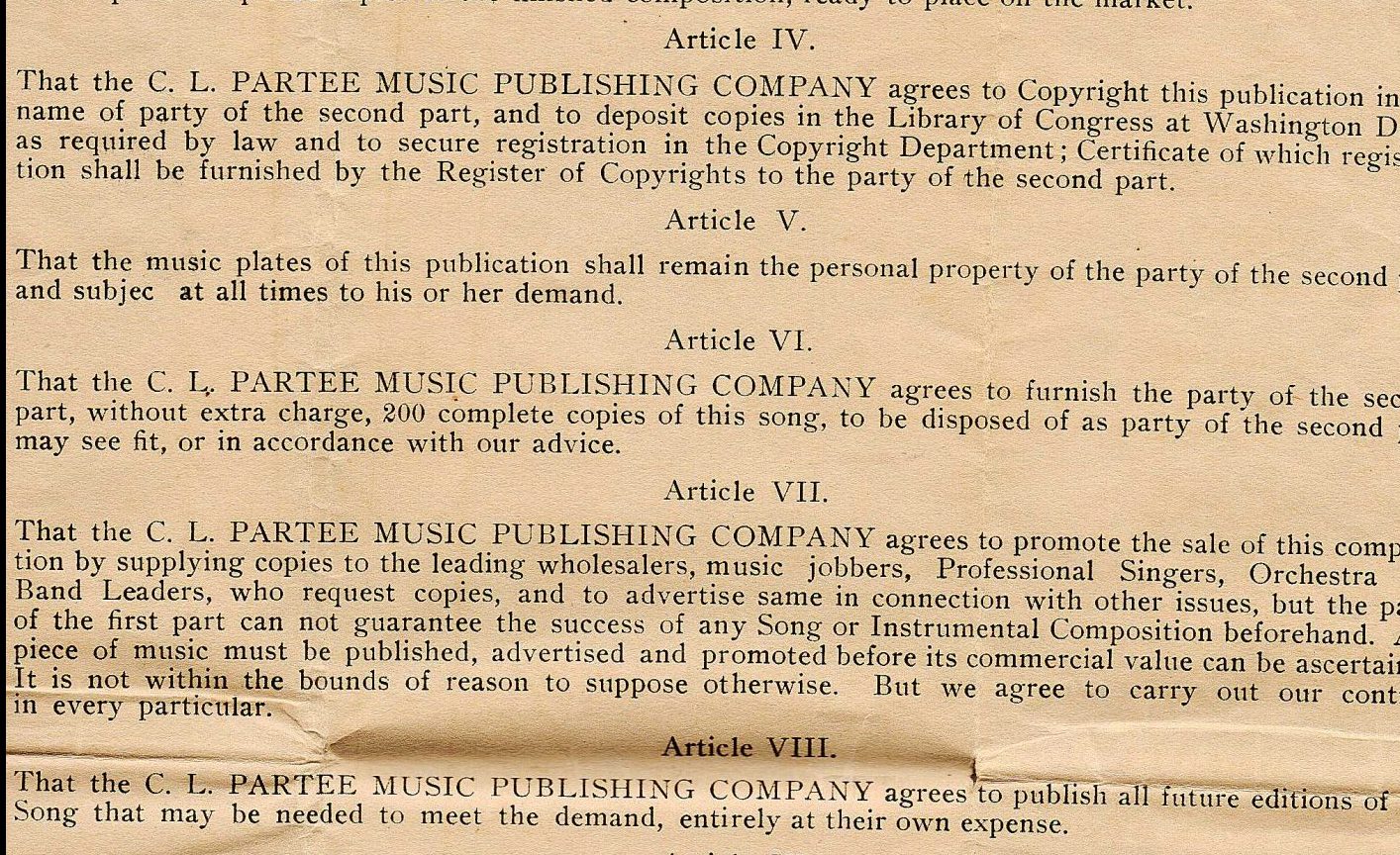 The fact remains that he did pay to publish several songs. The one contract that survived did promise that the company would place copies in appropriate sales outlets, with a 50/50 sharing of proceeds. I do not know if he ever received any royalties or if any of the songs were ever heard by the public, other than by his own band.

I often wonder what sacrifices he made to pay the bill for his attempt at recognition in the music world. The cost to the poet varied by company from $10 to $32. The latter is close to the average week’s wages in the day. My grandfather had at least three songs registered with the Library of Congress, so the overall cost is not insignificant. The registration forms for these three songs survived and are amongst the treasured song sheets in my cupboard. There are additional songs crediting the same composer, increasing the overall cost of this initiative.

There is an irresistible urge to get your work into the hands of others and to have it recognized. People in the publishing business know this and some of the less honourable take advantage. There continue to be companies that make unkept promises to get possession of the work of others for their own benefit. We live in a “buyer beware” world. Today it is even more difficult to tell the difference between legitimate and shady calls for the work of creative musicians.

I will never know whether my grandfather felt he was duped, or if there was some profit from his investment. I do know that the money he paid has resulted in me having possession of his words, his sentiments. No price can be put on that gift. I will be eternally grateful that he chose to publish these songs.

Remember: Someday your grandchild may write a novel that includes your songs. Make sure you preserve them, along with rich details of how they came to be, so that future generations do not need to guess, as I did, about their origins. Samways’ debut album is out and so ...

3 acts to catch during the virtual ...