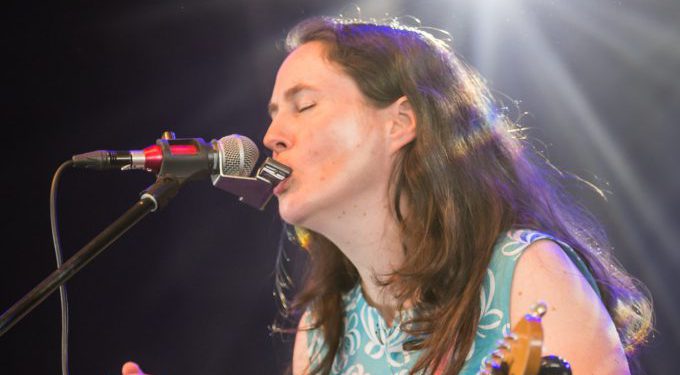 Photo: Catriona Sturton performs at the 2018 Ottawa Bluesfest. She is one of the artists performing during Ovation Ottawa. Photo by Scott Penner.

The Ottawa Music Industry Coalition is getting ready to reboot its local music scene with a massive fundraising concert series called Ovation Ottawa.

Running between now and Sept. 2, it will feature streaming concerts by more than 40 local artists with the goal of raising $50,000 to put towards the Ottawa Music Development Fund.  The vision is to use that money to create a new stream of grants for local artists and venues and to create a series of music showcases in the fall and winter of 2021 that will help to re-ignite Ottawa’s live scene.

The participating artists represent a wide variety of genres, but roots artists are well represented.  They include Lynne Hanson, Twin Flames, Shawna Caspi, Catriona Sturton, Kristine St-Pierre and Fred Penner – who, to be fair, now lives in British Columbia but is apparently still considered an honorary Ottawan.

There is also a live online auction featuring an array of locally-sourced items, such as musicians’ music, merchandise and art and gift packages from businesses.  Fans are invited to visit the online auction regularly as new items are being added every week, and bids start at $5.

“I’m more than happy to help the Ottawa Music Industry Coalition raise funds to kickstart the local music scene,” said musician and Ottawa folk scene stalwart Chris White. “My work with the Ottawa Folk Festival, CKCU FM and Folkzone has given me enormous love and respect for the people who make and share music in this area.  This is a critically important time to nurture and sustain those talented folks.”

The City of Ottawa examined the devastating impact of COVID-19 in a report called Counting the Cost of Covid-19 and estimated that approximately 2,657 musicians and singers in the city had lost more $28 million in income.

“They say you don’t know what you have until it’s gone, and when the live music left during the pandemic what remained in me was a pretty deep void needing to be filled with drum beats, guitar strums and sax solos” said Andre R. Gagne, part of the Ovation team. “Joining up with OMIC in an effort to raise something, anything, is a way to give back to the Ottawa music community that has given so much to me.”

Samways’ debut album is out and so ...