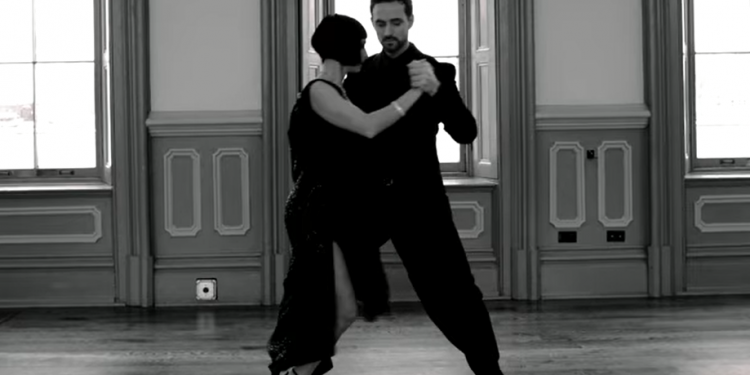 Is it possible to create a new tango ballet while trapped in a small room during the COVID-19 lockdown?

“We couldn’t leave our apartment in Buenos Aires,” remembered Alexander Richardson, choreographer of the London, ON-based PointeTango dance company.  Alexander and his partner, dancer Erin Scott-Kafadar, were in Argentina researching and developing a new concert program when the COVID-19 pandemic hit the South American nation in March of 2020.

As Buenos Aires went into full lockdown, the duo who created PointeTango, a unique troupe that blends Argentinian tango and classical pointe ballet techniques, faced a series of crises:  How could they rehearse when trapped in a small apartment? How could they even stay in shape? And how would they return home to Canada?

“You couldn’t walk for more than five blocks from your house,” explained Alexander, describing the extent of the lockdown in Argentina’s capital. “There were police officers every two blocks. All flights out of the country were cancelled.”  Adding to their problems, the dance studio they had rented was seven blocks away from their apartment, and the police strictly enforced the lockdown.

“We started moving the furniture in our small apartment so we could stay active,” Erin recalled.  “Our living room in Buenos Aires was eight feet by eight feet. We moved the couch into the hallway against the door, so we’d have some room to practice.”

“It was a challenge, as dancers, to remain in peak physical shape,” Alexander explained.  “We had to train element by element separately because we didn’t have the space to run through our routines.”

Seven weeks later, in May of 2020, Erin and Alexander finally were able to fly home to Canada.  After another two weeks of quarantine, they realized that their 40-show tour of Canada and the U.K. was postponed, as public performances had become an early casualty of the pandemic.

What can a dance troupe do during a year in lockdown?  While Zoom-style concerts are an option for many bands – athletic tango ballets just can’t be pulled off from a basement studio or living room.

Meanwhile, violinist Rebekah Wolkstein was stuck at her home in Toronto, also in lockdown, trying to pick up the pieces, restructuring a year that should have been centered around touring.  Rebekah is the founder of Payadora, Canada’s pre-eminent tango ensemble, a quartet of conservatory-trained virtuosi that features Robert Horvath (piano), Joseph Phillips (double bass) and Drew Jurecka (bandoneon).  In 2019, aka “The Before Times,” she had met Erin and Alexander at a PointeTango performance, and they imagined a wondrous partnership in their shared vision of fusing western classical and Argentinian traditions. “I saw them perform live, back when the world existed,” Rebekah recalled, “and we were on the same page from the start.”

Of course, the original pre-Covid page included an extensive tour.  Their vision was to create a tango ballet called “Tango in the Dark” about milongas, a social gathering to tango dance. “It is the essence of tango,” Alexander explained.  “You go out at 11 p.m., eat, drink and dance all night until dawn the next day.”

“With milongas, you don’t always have to dance with the same partner. At the moment, with Covid, it’s difficult to keep this tradition alive,” Erin added.

How could they present Tango in the Dark in lockdown?  Payadora and PointeTango came up with a new idea: a film.  The ensembles began grant writing. Payadora would compose original music, and PointeTango would create a new dance performance.

After the project was funded in part by the Canada Council for the Arts and the Ontario Arts Council, Payadora and PointeTango began reimagining Tango in the Dark. The theme of darkness took on new meaning in the world of COVID-19.  “Originally, the theme was, ‘What happens in Buenos Aires after the sun sets’ and a different culture comes out,” Alexander said.

The members of Payadora had to record each of their own parts at home during the pandemic.  “We have opened up this possibility of remote recording,” Rebekah said about the process of creating everything in isolation.  Under the direction of producer Drew Jurecka, Payadora managed to completely capture their magic despite being physically separated.

Then, PointeTango began searching for venues to safely film those works: parking lots, a transportation museum that was closed to the public and a wilderness conservation area.

“We tore up two pairs of dance shoes when we filmed at the parking lot,” Alexander recalled. “Because of COVID-19, we used just one cameraperson and tried to shoot as much as possible with long range lenses.”  Another consequence of having just one camera – it often took five or more hours to film a three-minute routine, with each take focusing on different elements: including footwork and lifts.

“In the film, we were able to transport people to different parts of the nightlife, creating the nightclub look,” said Alexander.

The result is simply breathtaking. Tango in the Dark, a series of stunning music videos, redefines what is artistically possible for artists working at home during the pandemic.  It’s moving, dramatic, acrobatic, sensual and haunting.

“We were trying to explore this theme of darkness, something that seems especially relevant in the world of COVID-19,” Erin said. “Even through this darkness, we wanted to create a sense of hope. So, in the end, Tango in the Dark finishes more uplifting, outside at a park, searching for light, and searching for our humanity.”

In a year that included Zoom Passover seders, Zoom Ramadan, Zoom Diwali, Zoom Christmas and even Zoom New Year’s Eve countdowns, it seems both fitting and a bit tragic that Valentine’s Day will be celebrated by millions online as well.  So, Canada’s top tango musicians and dancers are doing their part to create a romantic but virtual Feb. 14.

Tango in the Dark premieres on Valentine’s Day with a “pay what you can” screening at https://pointetango.com/tango-in-the-dark-3/