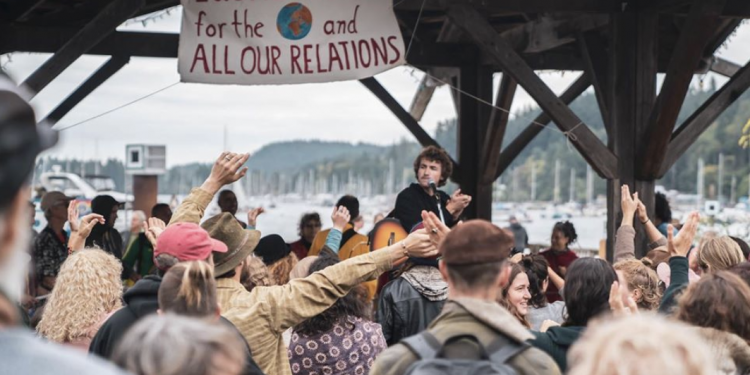 There are specific songs, certain albums and moments in music that have a way of sticking with you over the years. Beyond the songs themselves, this has so much to do with who you were at those times.

For me, 1994 will always be the best year in music. Nirvana – Unplugged, Green Day – Dookie, Soundgarden – Superunknown, Beck – Mellow Gold, Weezer’s blue album, I could go on and on and on. Seriously, look up the albums that came out in 1994. It was a coming of age for grunge and alt rock, and for a young teenager heading into Grade Nine, it was the soundtrack for my adolescence.

I was a 20-something in the mid-2000s, on the cusp of adulthood and feeling the energy of a changing world. I remember standing in the lawn section of the Amphitheatre in Toronto. With a single strum of the guitar, Eddie Vedder sang one word ‘Waiting…’ and then stepped back from the mic. We took over, thousands of voices became one and sang together about a better man.

And I’m not afraid to admit that just a few years ago the words and music of Passenger got me through an incredibly difficult break-up. “And you let her go.” Cliché? Sure, but it was my cliché.

These were all very personal experiences with music, deeply connected to where I was at that time in my life. They mean ‘something’ because they ‘mean something’ to me.

2020 has given us a moment I don’t think we have ever had before. A truly global experience. While the impact of this has been different for everyone, it is an experience that has connected us all like no other. And given that technology allows us to communicate these instantaneously, it is truly a moment we are all sharing together in real time.

As the year winds to a close I’ve been feeling the shifts we are making. I am optimistic that some of the changes that have needed to happen for a long time are beginning to take shape. There is still a lot of work to do, but it seems like it’s possible, more so than ever. This was the place I was at when I stumbled across the music of Luke Wallace, a voice we might all need right now.

Luke’s latest album, What on Earth, was released on March 6, 2020, a mere week before the world changed. Yet the words he speaks seem like they were written for the days to come.

The album opens with “Biosphere” and immediately captures a feeling many of us share.

“You can’t believe anything they say.

You can’t believe anybody these days.

I cannot trust what’s between my ears.

You can’t believe everything you hear.”

It’s an experience we can all relate too. One that often leads to negative reactions, like lashing out against those with opposing views and entrenching ourselves in our beliefs. Luke takes the opposite approach.

“So I quiet down, listen to my heart.

Make a whole out of all the parts.

Find myself in everyone I see.

It’s all right there looking back at me.”

The depth is in the simplicity. These words clearly coming from someone who has done the work, remarkable for someone so young. The ideas are ones I wish I understood at his age.

This leaves me hopeful about where we are headed, that there is a younger generation ready for change and in the right headspace to truly make a better world. Maybe I’m just being hopefully optimistic, but I do believe art leads the way. Hearing an album like What on Earth tells me we are heading in the right direction.

I won’t spoil any more of the album; you should listen to it for yourself from your perspective not mine. However make sure you take it in from front to back. With nine tracks, there are no throw-aways on this album. Each song has its own theme, dealing with concepts you can tell Luke has thought about well beyond the context of just these songs. I believe this is an album we all need to hear right now.

I will leave you with these words from the album’s title track, “What On Earth.” Calling out to each of us to envision a better world by looking within and finding our connections to the planet.

“I used to reach for the stars

Then I learned who I are

Now they reach for me and I let em’ in

I used to reach for the stars

Now instead I let it in and it fills the dark

Yea I let it in and it fills the dark

What on earth are you doing?”

http://www.lukewallacemusic.com/
Correction:  a previous version of this story contained the wrong album title for Luke’s album.
If you are enjoying this content, please take a second to support Roots Music Canada on Patreon!